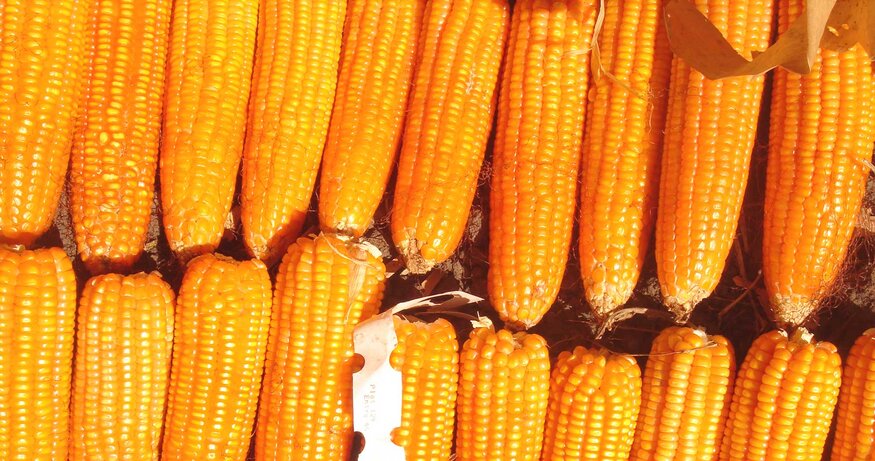 Vitamin A is important in immune function. Approximately one third of children under the age of five are at risk for Vitamin A deficiency (WHO 2009). This is the leading cause of preventable childhood blindness.

Nutrition trials in countries administering Vitamin A capsules resulted on average in a 24% reduction in child mortality. By breeding staple crops with higher amounts of Vitamin A, the supply of Vitamin A in our food sources can be sustainably increased.

Maize provides approximately 30% of the total calories of more than 4.5 billion people in developing countries, and is the most widely eaten food staple in Africa. Poor quality diets, dominated by food staples, are often deficient in minerals and vitamins, but maize can provide sufficient quantities of Provitamin A (proVA), which the body converts to Vitamin A.

Maize can grow in diverse environments and has a high potential to be bred to provide productive cultivars that are attractive to farmers and consumers, including for their nutritional properties.

HarvestPlus has collaborated with CIMMYT, IITA, EMBRAPA and other partners to develop maize varieties that are high yielding, profitable, acceptable to consumers, and also rich in Provitamin A carotenoids (Box 1). Beta-carotene is the most common proVA carotenoid in plants. The breeding target for maize was set at 15 µg/g of beta-carotene, to provide an additional 50% of the estimated average requirement for Vitamin A in maize-eating regions. Maize with these levels of beta-carotene would be an effective contributor to reducing Vitamin A deficiency.

ProVA maize breeding is an excellent example of the effective use of both adapted and exotic genetic resources in crop improvement. Breeders found a wide range of levels of proVA carotenoids in temperate, tropical and subtropical germplasm during the initial screening studies (Ortiz-Monasterio et al. 2007; Menkir et al. 2008).

ProVA donors were crossed with elite germplasm of white maize that had high yield potential and good agronomic traits, such as disease resistance and drought tolerance (Box 2). For example, IITA breeders used the KU1414 and KU1409 lines from Thailand, which had been derived from the downy mildew resistant Suwan 1 variety from the Philippines and a Thai Composite. The Thai Composite was developed by inter-crossing 36 maize varieties and cultivars introduced from the Caribbean, Mexico, Central America, South America and other areas.Backcross breeding was then used to fix the desired orange color. 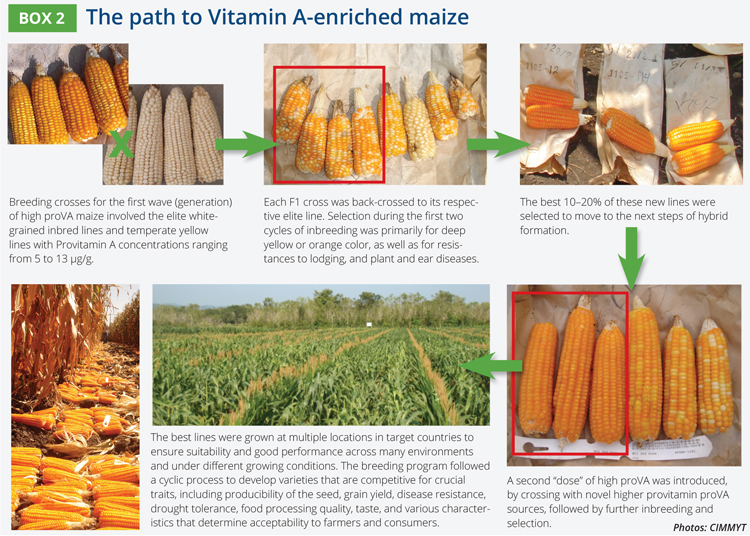 Maize inbred lines with high levels of proVA and desirable agronomic and adaptive traits developed at CIMMYT (for tropical mid-altitudes), IITA (for tropical lowlands), and EMBRAPA in Brazil were then used to develop hybrids and open-pollinated varieties (OPVs) that have high levels of proVA content and are agronomically competitive in target countries. Extensive evaluations were conducted in collaboration with public and private sector partners in the Democratic Republic of Congo, Ghana, Mali, Malawi, Nigeria, Tanzania, Zambia and Zimbabwe. These evaluations led to the selection of promising hybrids and OPVs for further testing in national performance and farmer participatory on-farm trials. The testing schemes facilitated the release of more than 40 hybrids and OPVs with up to 90% of the proVA breeding target in eight countries in sub-Saharan Africa and Brazil (Andersson et al. 2017).

Breeder seed of the released proVA biofortified maize OPVs and hybrid parental lines has been multiplied and made available to national programs and private seed companies, who are tasked with producing and marketing these materials. Seed has also been supplied to community-based and other seed producers as well as startup national seed companies to help accelerate multiplication and commercialization of OPV products to farming communities in rural areas with limited market access.

Nutritional studies have shown that proVA biofortified maize is an efficacious source of Vitamin A. Consumption of orange maize has been demonstrated to improve total body Vitamin A stores as effectively as supplementation (Gannon et al. 2014), and significantly improve visual function in marginally Vitamin A deficient children (Palmer et al. 2016).

Crop diversity contributes to a stable, sustainable and diverse food production system and plays an important role in improving nutritional outcomes. CGIAR, in partnership with the Crop Trust, is working towards ensuring that such crop diversity is conserved and available forever (Box 3). 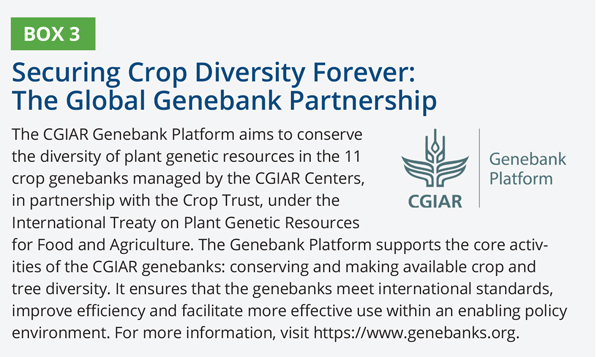 There is a long and often complex history behind every modern crop cultivar, but their economic and other benefits far exceed the costs of the collection and conservation of germplasm (Robinson 2000), as well as those of the breeding programs that produced them. This progress described in improving the Provitamin A content of maize varieties and hybrids is just one example of what is made possible by the genetic variation preserved in the genebanks managed by CGIAR and national programs around the world.

Malnutrition is estimated to contribute to 45% of all child deaths in developing countries. More than two billion people do not get enough essential vitamins and minerals because their diets are not properly balanced. Even when consumption of food staples is high, so that the poor do not go hungry, more nutritious foods are not affordable and getting more so.

The deficiencies of Vitamin A, iron and zinc are the most widespread and serious. These result in higher mortality and morbidity, reduced cognitive abilities and lower work performance.

HarvestPlus and its partners seek to reduce such “hidden hunger” by breeding staple foods that are high yielding and dense in minerals and vitamins (Bouis and Saltzman 2017a), a process known as biofortification. Biofortified varieties, developed through research at a central location, can be made available to multiple countries, and, once released, are available in national food systems year after year at no additional cost to farmers and consumers.

Bouis, H.E. and Saltzman, A. (2017b) Special issue devoted to Biofortification. African Journal of Food, Agriculture, Nutrition and Development 17(2). Available at https://www.ajfand.net/Volume17/No2/.

WHO (2009) Global prevalence of vitamin A deficiency in populations at risk 1995–2005. WHO Global Database on Vitamin A Deficiency. Geneva, World Health Organization. Available at http://bit.ly/2Br80nY.