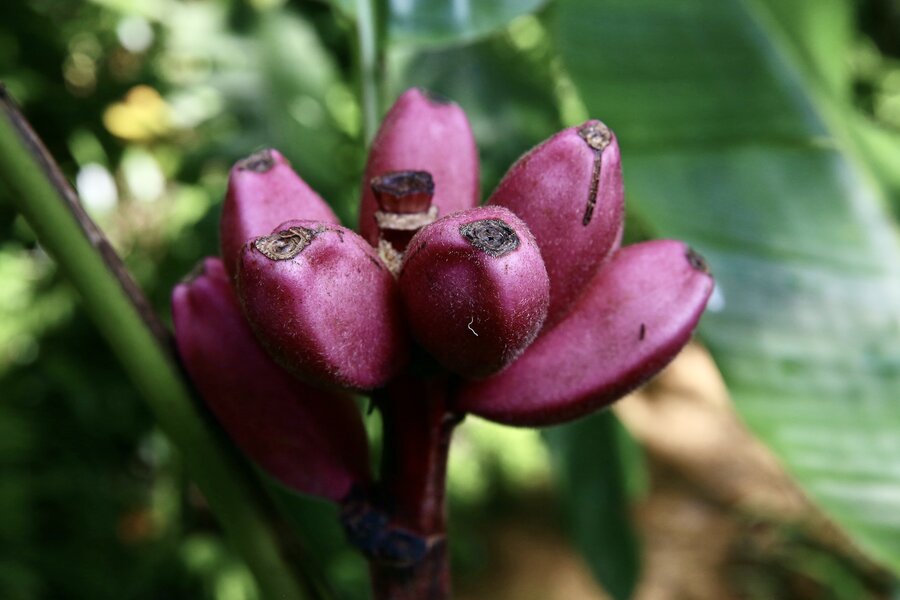 Banana is much more than the standard yellow supermarket fruit known to European and North American consumers. In fact, that variety represents only a minor proportion of global production. Bananas and plantains are grown in more than 130 countries across the tropics, and about 90% are produced on small farms and are consumed locally. They are particularly important in East Africa where they constitute the main staple food for about 50% of the population. In this part of the world, the annual consumption can exceed 400 kg per person. In terms of gross value of production, bananas and plantains are the developing world’s fourth most important crop after rice, wheat and maize.

The fruits are highly nutritious, containing large amounts of carbohydrates and minerals such as phosphorus, calcium, and potassium as well as vitamins A and C.

Since most cultivated bananas and plantains have sterile seeds, and therefore need to be propagated vegetatively (i.e. from cuttings), they cannot be conserved in normal seed banks. Away from farmers’ fields there are three main ways to conserve bananas: in field genebanks, in vitro, and cryopreservation. The most common method is field genebanks (collections of banana trees), and large and important collections of living plants are found in the Pacific islands, mainland South Asia and Eastern Africa. Disease is a major problem with vegetatively propagated crops, which are often genetically uniform, and field genebanks are as vulnerable as farmers’ fields to the spread of disease. A more secure alternative is in vitro conservation – collections of plantlets, grown on a nutrient medium in sterile glass or plastic containers. INIBAP, the International Network for the Improvement of Banana and Plantain, maintains the largest in vitro collection in the world – the Musa Germplasm Collection at KULeuven in Belgium. Cryopreservation is the storage of plant material in liquid nitrogen (-196°C). Cryopreservation freezes metabolic processes and cell division and therefore allows long-term storage in disease-free conditions. The cryopreservation of all banana accessions within the international collection is nearing completion.

A disturbing scenario is unfolding in East African banana cultivation. In the past, the banana was a hardy crop with a long plantation life and stable yields year round. However with the arrival of the Black Sigatoka fungus, banana production in eastern Africa has fallen by over 40%. This is dramatic in countries were banana is the main source of year-round food security. The situation has started to improve as new disease resistant varieties have been developed. However, these new varieties taste differently from those traditionally grown, which has therefore slowed their acceptant by local farmers.

In other places in the world the supermarket banana of choice, the “Cavendish” cultivar, which dominates the multi-billion dollar banana export industry, is also at risk. “Cavendish” is an extremely popular variety in Europe and the Americas, but its genetic uniformity makes it vulnerable to disease. This will eventually require breeders to find resistance and produce a new variety equally palatable to western consumers.