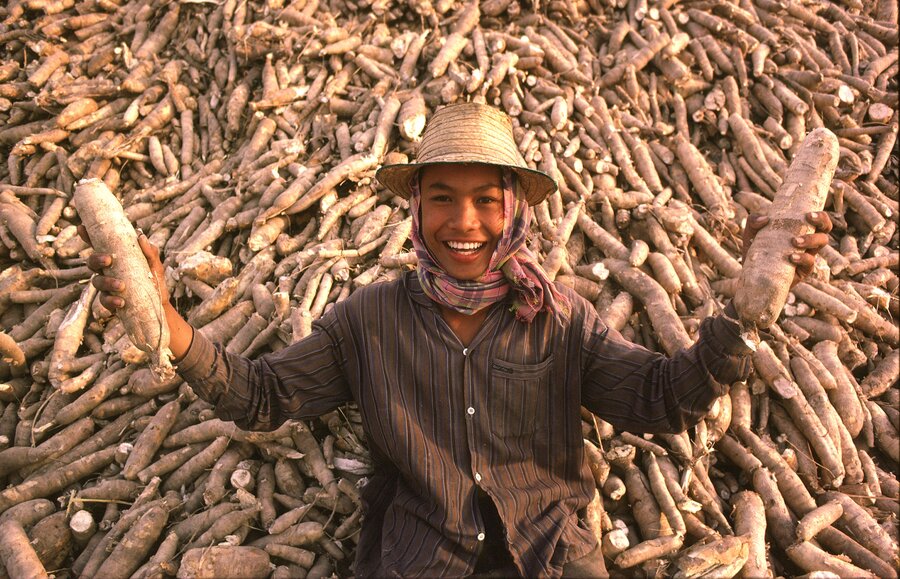 Cassava is a perennial woody shrub with an edible root, which grows in tropical and subtropical areas of the world. It is also called yuca, manioc, and mandioca. Cassava is currently the sixth most produced crop in terms of global production, and is the staple for millions of people in the poorest and most marginal regions of the world. It is very hardy, with the ability to grow on land where drought is frequent and in soils where nutrients are low, where cereals and other crops do not grow well. As cassava roots can be stored in the ground for up to 24 months, and for some varieties up to 36 months, harvest may be delayed until needed, or until processing or other conditions are favorable.

Cassava’s high starch content provides a valuable source of carbohydrates, much higher than those of maize or rice. In Africa, people also eat the leaves of the cassava as a green vegetable, which provide a cheap source of protein and vitamins A and B. Cassava as a processed starch is not particularly nutritious, and its widespread use is due more to its reliability in harsh environments than its actual nutritional quality.

The crop contains some serious toxins (cyanogenic glycosides). Some forms with very low levels of this toxin have evolved locally, but in general, processing is needed to remove the poisons prior to eating. The large roots are peeled and then ground into flour, which is then soaked in water, squeezed dry several times, and toasted. Breeding for lower toxicity levels is certainly a goal of plant breeders, however the more poisonous forms are often preferred by many farming communities, as the toxins prevent grazing by animals.

Roots are processed into a wide variety of granules, pastes, flours, or consumed freshly boiled or raw. The flour has recently begun to be used in partial substitution for wheat flour. In Southeast Asia and Latin America, aside from direct human consumption, cassava is used commercially for the production of animal feed, and cassava starch is used as a binding agent in the production of paper and textiles, and as monosodium glutamate, an important flavoring agent in Asian cooking.

According to the International Institute of Tropical Agriculture (IITA): “Pests and diseases, together with poor cultural practices, combine to cause yield losses that may be as high as 50% in Africa.” As it is primarily a staple of the poor, cassava did not receive much attention from modern breeding until quite recently.