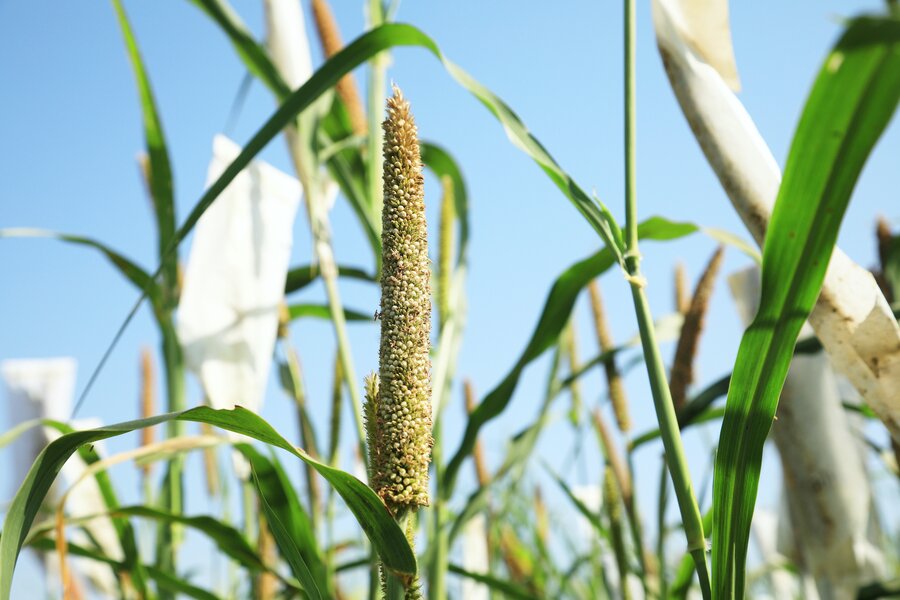 Pearl millet is the most widely grown of the millets. There are few cereals able to produce such stable yields in marginal, hot and dry agricultural conditions.
Pearl millet is a staple cereal in the Sahel, Sudan, northern Namibia and Angola, and in the state of Rajastan in India. This reflects the crop’s main cultivation areas: across Africa from Mauritania to Sudan and south to South Africa, and across the Indian central plateau. Millions of the poorest farmers of the world depend on this crop.

Pearl millet is eaten in the form of breads, porridges and in boiled or steamed foods. Millet beer is often called a staple of religious and social life in Africa. As a result of its high protein content, and competitive yields on marginal lands, the grain is gaining popularity as feed for poultry and other livestock.

The adaptations of pearl millet to withstand extreme heat and drought are truly extraordinary. When there is a little moisture available, the seedling germinates and rapidly extends its roots far down into the soil to where water is available. Meanwhile, the surface temperatures can climb above 50°C. In drought, the plant can stay dormant for long dry spells, bursting into growth once the rain returns.
The ability of pearl millet to grow in dry and marginal environments clearly makes it a crop with an important role in the future. As the market the crop serves is marginal, pearl millet may be considered an “orphan crop,” as it has historically received little attention from commercial breeders.