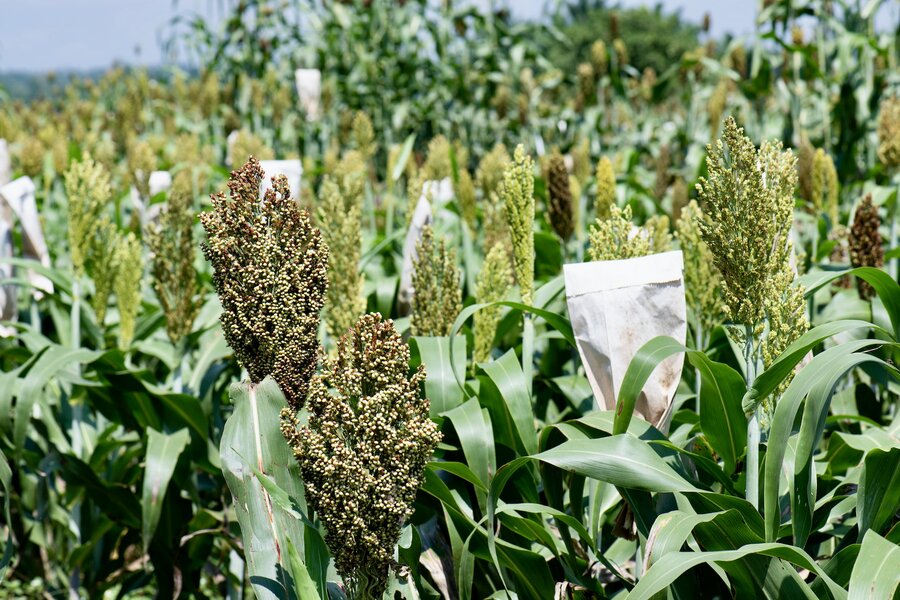 Sorghum is called “the camel of crops.” It has earned this name because of its ability to grow in arid soils and withstand prolonged droughts. The crop plays a major role in the food security of millions of people in marginal agricultural areas. It occupies 25% or more of arable land in Mauritania, Gambia, Mali, Burkina Faso, Ghana, Niger, Somalia and Yemen, and globally it is the fifth largest cereal crop after wheat, rice, maize and barley.

Sorghum displays an impressive diversity in both its qualities as a food grain and in its ecological adaptations and appearance. Although particularly adapted to drought-prone areas that are too dry for maize, the diversity of the crop allows it to grow in temperate and high-altitude conditions.

Birds share our fondness for sorghum, posing a problem in farmers’ fields. A traditional way of using crop diversity to combat this problem in Africa, and a good example of environmentally friendly pest control, has been to grow bitter varieties with a high tannin content. These varieties are not edible in unprocessed form for either birds or humans, but fermenting or cooking makes the “bird resistant” grain good human food.

The crop has multiple uses beyond using the grain as food. A sweet syrup is made from the juice of the stems in the southern United States. The cereal makes excellent brew for beer and other alcoholic beverages. The plant is used as animal fodder after harvest, and the straw is often used for fencing and building material for huts. Roots are used as fuel for cooking. Now sorghum is also grown as an energy crop, producing ethanol from the sweet sorghum variety for use as bio-fuel. Sorghum is also used in the production of wallboard in the housing industry and in biodegradable packaging materials.