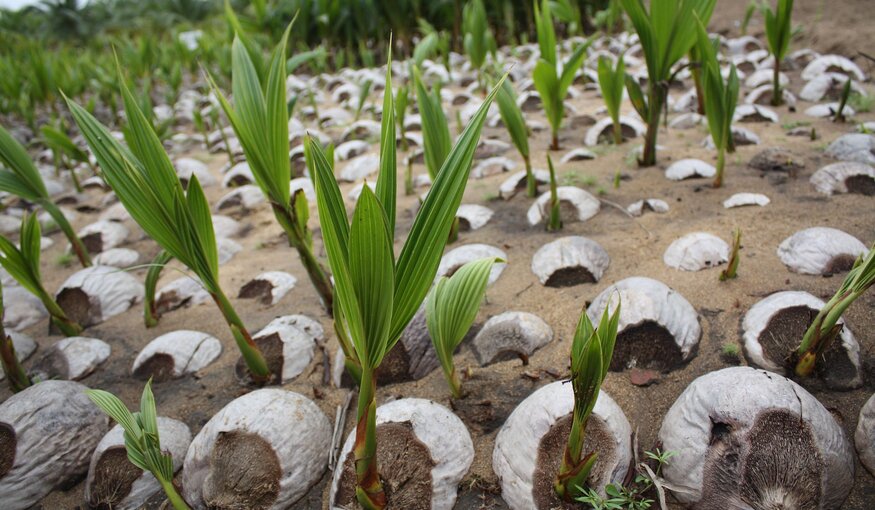 SYDNEY (22 October 2010)—Hoping to save the vulnerable varieties of bananas painted by the artist Paul Gauguin, rare coconuts, and 1,000 other unique varieties of staple fruit and vegetable crops across the Pacific, crop specialists from nine islands have launched a major effort to preserve the indigenous diversity of foods that are deemed critical to combating diet related health problems.

“Through this project we will bring together 1,000 unique samples of Pacific crops for long-term conservation,” said Dr. Mary Taylor, Manager of the Centre for Pacific Crops and Trees (CePaCT) at the Secretariat of the Pacific Community (SPC). “Crop collections in the Pacific are very vulnerable; all they need is a disease outbreak or a cyclone to destroy the entire collection.  These collections are essential if we are going to maintain traditional Pacific crops for future generations.”

For example, only a few of the varieties of the orange- and yellow-fleshed Fe’i banana, famously painted by former Pacific island resident Gauguin, are still found in farmers’ fields. Studies by Dr. Lois Englberger from the Island Food Community of Pohnpei in the Federated States of Micronesia have shown that these bananas are an excellent source of beta-carotene, essential for the production of vitamin A. Vitamin A deficiency—causing blindness, greatly weakened immune systems and even death in infants—is now common in parts of the Pacific. Good betacarotene levels in the diet also help protect against non-communicable diseases such as cancer, diabetes and heart disease that are now at epidemic rates throughout the Pacific Islands.

The Pacific region is made up of 22 countries and territories with a relatively small population spread out amongst approximately 7,500 islands covering 30 million square kilometers—nearly twice the size of Russia. There is little maize, wheat, or rice grown in the region. Instead, farmers have cultivated many varieties of root crops and starchy fruits as their staple foods, such as taro, yam, sweet potato, breadfruit and cooking banana, along with coconut, that have been selected over the centuries for their suitability to island environments.  Pacific island crop diversity is especially hard to save because most of the crops do not produce seed.  Preserving them requires saving a part of the plant itself. In some parts of the region, national agriculture programs have set up field collections to conserve indigenous varieties. But the collections are constantly threatened by plant disease, harsh weather, and poor land management.

“These unique crop varieties are so important in the Pacific,” said Cary Fowler, Executive Director of the Global Drop Diversity Trust. “In addition to having valuable nutritional traits, they will provide the key to developing crops in the future that can potentially deal with harsh island environments. It is essential that they are well conserved.”

A recent Pacific Food Summit stressed the need to turn back to local foods to address dietrelated health issues that are linked to a movement away from traditional staples. Today, life expectancy in some Pacific islands is actually decreasing because of diet-related illnesses. Diabetes rates are among the highest in the world, reaching up to 44 percent in Tokelau atolls, compared to around 8 percent in the United States.

The project to conserve some of this indigenous food diversity in the Pacific is being coordinated by the SPC CePaCT as part of a broader effort involving major crop species worldwide. The Trust, with support from the UN Foundation and the Bill and Melinda Gates Foundation, is helping partners in 68 countries rescue and regenerate more than 80,000 endangered accessions in crop collections and send duplicates to international genebanks and the Svalbard Global Seed Vault in the Arctic Circle.

The assistance from the Trust will allow CePaCT to provide a safe home for crop varieties that may be in danger. CePaCT is partnering with public institutes in French Polynesia, Federated States of Micronesia, Fiji, Kiribati, New Caledonia, Papua New Guinea, Samoa, the Solomon Islands and Vanuatu. The partners, with support from the Trust, are replanting or gathering crop varieties unique to their islands, documenting their characteristics and sending duplicate plants for safekeeping to the laboratory at CePaCT.

The Fe’i Banana, the Niu Coconut, and Giant Swamp Taro

Once highly abundant as an everyday staple in the islands of French Polynesia, the Fe’i banana fell into disuse as populations shifted and cultural changes took place. Fortunately, in 2008 and 2009, Maurice Wong, an energetic genebank curator based in Tahiti, collected more than 100 samples of the bananas from isolated farms on six islands in French Polynesia. The samples will be conserved in a field collection with duplicates sent to CePaCT.

The Niu Afa coconut variety has also been rescued from a location that is now home to a penal colony. This rare coconut variety is recognized for producing the largest known coconuts. Farmers now rarely cultivate it since hybrid coconuts have become more common. The embryos from the seed of the Niu Afa coconuts have been extracted and taken to CePaCT to be cultured in the laboratory. Eventually, they will regenerate into whole plants to be planted back out in the field in multiple sites.

Another unique crop targeted for conservation is the giant swamp taro, a resilient crop that can survive harsh atoll conditions including sandy saline soils, and once planted can be neglected for several years until needed. This is the main crop of atoll islands and a major food crop elsewhere, also serving as a famine food; when other crops have failed, the edible underground stems of the swamp taro are dug up and can provide ample food for a village for several weeks or months.

At CePaCT, Taylor and her colleagues save the plants in small glass tubes and, to add extra security, are working with the Trust to test state-of-the-art cryoconservation methods. Cryoconservation allows researchers to freeze plant materials at ultra low temperatures and safely store them for decades.

Bringing these crop varieties into safe conservation is only the beginning of the story. Increasingly strong community movements that support local foods and encourage the cultivation of local crops are tapping into this diversity. Activists like Lois Englberger are encouraging people to “Go Local”. “We have imported a lot of health problems to the Pacific, but by preserving and rediscovering our Fe’i banana and taro, we literally have a homegrown solution.”