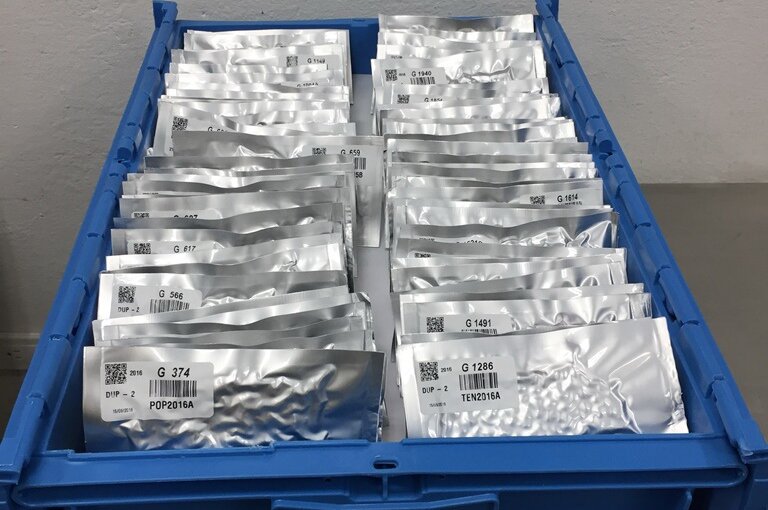 The largest agro-biodiversity collection in the world just got a little larger.

The seeds arrive two days after FAO’s World Food Day 2016, which promoted the theme “Climate is Changing and Food and Agriculture Must Too.” The seeds deposited at the vault are the building blocks that will help agriculture do just that.

Included in this shipment are unique maize varieties important for local cuisine in Bosnia and Herzegovina; accessions of Bermuda bean ­– the only wild bean species native to Bermuda; wild potato and sweet potato species collected from across Latin America; and Guinea grass, one of the world’s most important productive tropical forage species.

These crops, amongst the thousands of other accessions that make up today’s deposit, will play a significant role both in adapting to and mitigating the adverse effects of climate change now and in the future.

“The prediction is that our food supply must double by 2050 to cope with the impact of climate change and population pressure on the global food system,” says Marina Antic, Senior Research Fellow, Genetic Resources Institute University of Banja Luka. “Safeguarding biodiversity allows us to access and use the genetic reservoirs needed to improve our crops. The more species we conserve, the more chances we have of deriving future value from them.”

To ensure that this genetic reservoir is safeguarded from any natural or manmade risk, the University of Banja Luka decided to make its first deposit into the Svalbard Global Seed Vault, the world’s safety repository for agriculture. The vault is owned by the Government of Norway and managed by the Global Crop Diversity Trust (Crop Trust) and the Nordic Genetic Resource Center (NordGen).

The Banja Luka boxes sent to Svalbard contain 326 accessions of maize and other cereal varieties that are no longer in commercial production yet still carry valuable genes for future research and breeding.

Cereals, including maize, are staple crops of known importance for food security, but Antic shares that they also play a strong role in the culinary traditions of the region. Bjelcic (white maize), crvenak (red maize) and tvrdunac (firm maize) are all very important for the people of Bosnia and Herzegovina, as many of their traditional and religious customs are connected with the varieties of old. The first dish in the region to be eaten on Christmas day, for example, is called "Cicvara", made of Bjelcic maize flour and kajmak (milk cream).

Cereals are also of great importance to the people of Burundi, and the Agricultural Research Institute of Burundi (ISABU) shipped 74 accessions of cereals along with vegetable crops and legumes to the vault today.

Also depositing cereal crops are the Nordic Genetic Resources Center (NordGen) with 1,090 accessions of barley, among other crops and the University of Japan Okayama with 1,599 accessions of barley. Barley is the fourth most important cereal crop in the world after wheat, maize, and rice and is grown in a number of environments where other grains cannot grow.

ICRISAT shipped 804 accessions to the vault, which come from over 60 countries. The shipment includes two cereal crops: sorghum and pearl millet, as well as pigeonpea and groundnut, important legume crops that supplement essential protein and fat requirements in African and Asian diets.

“The global germplasm collections conserved at the ICRISAT genebank play a crucial role for meeting the food requirements of the poorest of the poor living in the semi-arid tropics,” says Hari Upadhyaya, Genebank Head and Principal Scientist at ICRISAT.

In addition to meeting food security needs, these crops offer traits that will assist breeders in adapting agriculture to the adverse effects of climate change.

Sorghum, called “the camel of crops” because of its ability to grow in arid soils and withstand prolonged droughts, is considered the world’s fifth most important cereal crop. While sorghum plays a major role in ensuring the food security of millions of people in marginal agricultural areas, it provides much more than just grain. The hardy crop can be used to make porridge, a sweet syrup, beer and wine, animal fodder, ethanol fuel and much more.

ICRISAT currently houses the world’s major collection of sorghum, with over 36,000 samples. Drawing on this collection and other genebank collections around the world, breeders have successfully boosted production by making crosses between different lines of sorghum diversity. In India, for example, crosses between the Caudatum, Guinea and Durra races have resulted in hybrid varieties that boosted income for millions of farmers by 40%.

Wild accessions of potato and sweet potato, known for their “rugged” traits like drought resistance, were also deposited today by the International Potato Center (CIP).

The sweet potato, which is currently ranked as 7th most important food crop and grown in more than 114 countries around the world, is known for its ability to grow in marginal soils, withstand intense heat and natural disasters, enrich nutritional security and enhance food security. In Latin America, the sweet potato's original home, yearly production is two million tons.

Cowpea, another drought resistant crop, was included in IITA’s shipment of 1,098 accessions, which also included mung bean, soybean, bambara groundnut, winged bean, pigeon pea and more. Cowpea has a reputation for being a tough crop that thrives in sandy soils and tolerates drought better than most; it is the most important grain legume in sub-Saharan Africa.

Mitigating the Effects of Climate Change

The largest deposit today was made by CIAT, marking their 10th deposit to the vault to date and included 4,392 accessions originating from over a hundred different countries.

“We have a very important responsibility with the countries who have deposited their collections in trust in our genebank,” says Luis Guillermo Santos Meléndez, Seed Conservation and Viability Lab Coordinator at CIAT. “Therefore, a backup of our collections is crucial to avoid losing the materials in case a tragedy occurs at this genebank: fire, explosion, natural disasters, etc. In case anything unfortunate happens, we are able to recover the seeds by regenerating and conserving the collections again.”

Included in this shipment was the Bermuda bean (Phaseolus lignosus), the only wild bean species originating in Bermuda. It is classified as “Critically Endangered” by the IUCN Red List of Threatened Species, which states that “this species is restricted to six sites on the island.”

CIAT also deposited 171 accessions of Guinea grass, another climate change beating crop. Guinea grass is one of the most important productive tropical forage species in CIAT’s collection and is known for its valuable uses as pasture, green-silage, hay, and silage for cattle.

In fact, research says that improved forages may be agriculture’s most promising option for climate change mitigation, as forage pastures have shown great potential for carbon sequestration, improving soil quality and reducing greenhouse gas emissions, second only to forests.

With today’s deposit, CIAT is proud to announce that 90% of its entire collection is now backed up in Svalbard.

The commitment of CIAT and the other 70 institutions that have deposited material into the Svalbard Global Seed Vault to date, speaks to the importance of these resources on a global scale. The new seeds arriving today, now stored at – 18°

Celsius deep inside a mountain on the Svalbard archipelago, will help us combat climate change and ensure a more food secure world.

“In a world that’s increasingly changing, it’s wonderful to see a renewed commitment from existing depositors to safeguard their resources. It’s comforting too to know that new countries and institutions are realizing the importance of a global back up and joining us in making sure our grandchildren’s grandchildren will have access to this global common good,” said Marie Haga, the Crop Trust’s Executive Director.