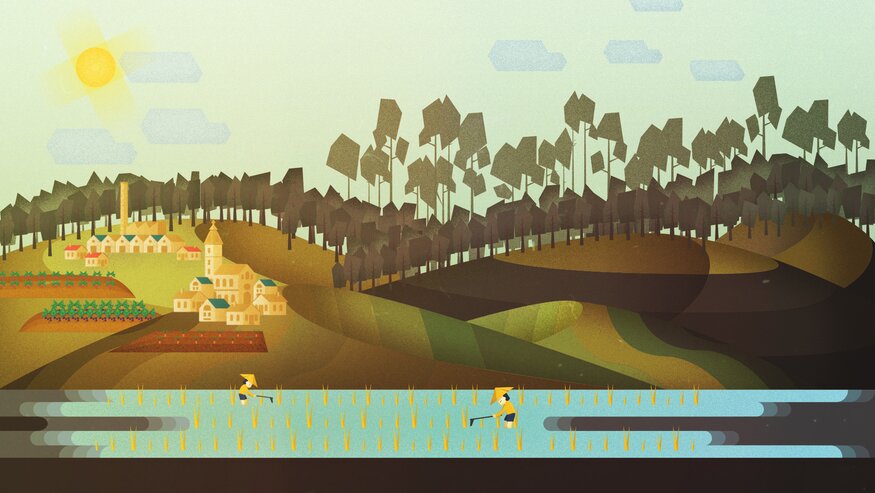 LONDON - 8 JUNE 2016 — The origins of over two-thirds of the grains, legumes, fruits, vegetables, and other agricultural crops countries grow and consume can be traced to ancient breadbaskets in distant parts of the world, according to an exhaustive peer-reviewed report published today.

The study, covering 151 crops and 177 countries, marks the first time scientists have quantified the level of interconnectedness of national diets and agricultural economies in terms of nonnative plants, providing a novel take on the global crop diaspora, and a deeper understanding of how globalization continues to affect what we eat. The findings also have important implications for efforts to make the global food supply more resilient to challenges such as climate change.

“It’s fascinating to see the extent to which so many plants have become synonymous with traditional diets in countries many thousands of miles from where those plants first appeared,” said lead author Colin Khoury of the International Center for Tropical Agriculture (CIAT) and United States Department of Agriculture. “If you’re eating tomatoes in Italy or chillies in Thailand, you’re consuming foods that originated far away, and that have reached those places relatively recently.

“Now we know just how much national diets and agricultural systems everywhere depend on crops that originated in other parts of the world.”

Khoury worked with fellow researchers at CIAT, the Global Crop Diversity Trust, and several universities to complete the study, published today in Proceedings of the Royal Society B.

They analyzed a range of crops central to food supplies (measured in calories, protein, fat, and food weight) and national agricultural production (measured in production quantity, harvested area, and production value) in countries covering 98% of the world’s population.

Each crop was traced back to the world’s 23 “primary regions of diversity”. These are geographic zones where a distinct range of edible plants were domesticated and developed by early farmers thousands of years ago, to become the food crops we know and love today. In recent centuries, migration, colonialism, and trade have resulted in many of these crops being produced and consumed far from their primary regions of diversity, a trend that continues today.

The study found that all countries of the world now rely on “foreign” crops that originated in geographic regions well beyond their borders. They found, for example, that foods of Mediterranean and West Asian origin dominate diets in

the United States. This is due to the preponderance of crops like wheat in bread and pasta, and barley and grapes in beverages like beer and wine.

They also revealed that the United States’ agricultural output and economy are significant beneficiaries of ancient farmers in East Asia, where soybean originated, and Central America and Mexico, where maize (corn) and other important staples were born.

At the same time, the report shows that today places as far afield as Eastern Europe, Argentina, China, East and Southern Africa, India and Southeast Asia all benefit from the use of sunflower oil - an important source of calories and fat whose ancestral home is North America.

In Pacific nations like Australia and New Zealand, close to 100% of diets and agricultural systems are based on “non-native” crops, the study found. The same was true of Indian Ocean Islands. In Madagascar, for example, the most important food crops include rice, cassava, maize, sugarcane, wheat, sweet potatoes, soybean, beans, and bananas, all of which originated elsewhere.

Cambodia, Bangladesh, and Niger, meanwhile, are among the countries least dependent on foreign crops; even so, at least a fifth of their diets is composed of crops that originated in distant regions. Mexico is in the middle-ground due to the continued popularity in local diets of crops like maize and beans, two plants native to the region, alongside sugarcane (with origins in Southeast and South Asia) and wheat.

Malawi, like most countries worldwide, depends on an array of crops from diverse regions. Its typical diet features crops from Central America and Mexico (including maize, cassava, and beans), South and Southeast Asia (sugarcane, rice, and bananas, and plantains), the South and East Mediterranean (wheat), tropical South America (cassava and groundnut), and Andean South America (potatoes and beans).

The authors also found that the proportion of non-native food crops in diets and agricultural systems has been steadily increasing over the past 50 years. This is a result of changing dietary preferences, economic development, urbanization, and other factors.

Khoury hopes that a better understanding of our continued connection to the primary regions of crop diversity will help change the way we think about food and farming. “As we’re all deeply connected to other parts of the world, our scientific research, our policies and our institutions need to reflect that,” he continued.

For example, plant breeders working to develop crops that can resist pests and diseases or higher temperatures often look to the broad range of plants and traditional crops in primary regions of diversity as sources of useful traits for crop improvement. But often these habitats are under threat, or conserved plant collections are not easily available.

Luigi Guarino of the Global Crop Diversity Trust, a co-author of the paper, agreed: “Traditional crop varieties and their wild relatives found in one small part of the world could potentially be of use all over the world. That means we need to steward them in their natural habitats, and also collect them, conserve them in genebanks, and share widely to help make our food system more resilient. We’ve long recognized this. It’s why we have the International Treaty on PGRFA. But it’s always good to have up-to-date data.”

The authors conclude the paper with a call to action. If the world waits too long to conserve crop diversity, its potential to benefit the world could be lost forever.