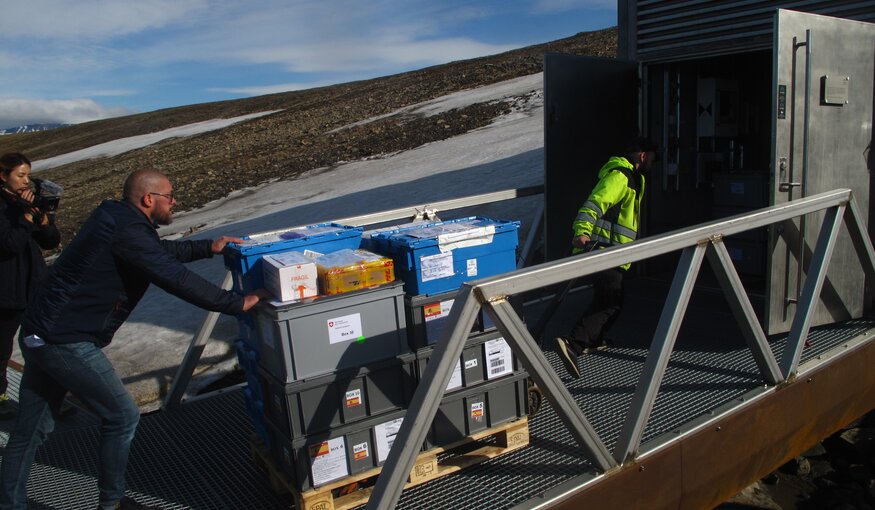 SVALBARD, Norway (9 June 2022) – The Svalbard Global Seed Vault is once again opening its door to seeds from around the world. Eleven genebanks from Africa, America, Asia and Europe are set to deposit a total of 19,391 seed samples on June 9.

For the first time, the national genebanks of Spain and Lithuania are participating.

“Spain holds collections of plant diversity that are not only important to the country, but to the whole world,” said Kent Nnadozie, Secretary of the Plant Treaty. “I hope other steps follow to guarantee the long-term conservation and use of the network of collections that Spain has built over the last decades.” The deposit from Spain consists of 979 seed samples of 102 species, mostly cereals and vegetables.

“The recent heatwave in India highlights how vulnerable our crops – indeed, our food systems – are to the vagaries of climate,” said Stefan Schmitz, Executive Director of the Crop Trust. “The whole of humanity relies on the genetic diversity of crops maintained in the world’s genebanks, and the Seed Vault is the last line of defense against the loss of that diversity.”

Among the eight other depositors are three international genebanks, the national genebank of Uganda and the US-based non-governmental organization Seed Savers Exchange, which is the only genebank in the world that has sent seeds to the Seed Vault every year since its opening in 2008.

“We are delighted to welcome new members to the Svalbard family,” said Sandra Borch, the Norwegian Minister of Agriculture and Food. “The Svalbard Global Seed Vault is a resource for the whole of humanity. Its aim is no less than to safeguard as much of our agricultural diversity as possible.”

Lise Lykke Steffensen, NordGen Executive Director, added: "With this latest deposit, the number of genebanks who have deposited seed for safekeeping in the Seed Vault rises to 91. And we look forward to seeing many more depositors back up their irreplaceable crop diversity in the Seed Vault, including recipients of the grant scheme announced in October 2021.”

The Svalbard Global Seed Vault was established and is owned by Norway and is operated in a partnership between the Norwegian Ministry of Agriculture and Food, NordGen (the Nordic countries’ regional genebank) and the Crop Trust.