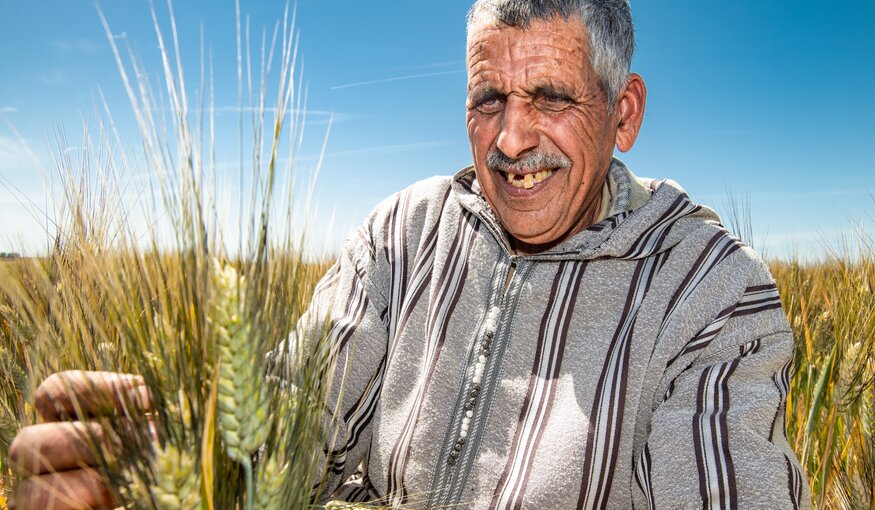 Farmer Ahmed El Aamri of Marchouch selected Jabal as his preferred variety. Among the many traits, he appreciated one that surprised the researchers was his preference for the black awns: a trait that was also possessed by an old variety his family used to grow on the farm when he was a child, and that made the best couscous he ever tasted. (Photo: Michael Major/Crop Trust)

A new drought-tolerant variety of durum wheat named Jabal, which means “mountain” in local Arabic, developed together by farmers and scientists in a decades-long project, has been released for cultivation in Morocco.

BONN, Germany (7 December 2022) – After years of hard work, a new drought-tolerant variety of durum wheat developed by plant breeders and genebank staff at the International Centre for Agricultural Research in the Dry Areas (ICARDA) working in close collaboration with local farmers, with support from the Crop Trust, has been officially released for cultivation in Morocco.

Named Jabal, which means “mountain” in Arabic, this climate change-resilient variety got its name from one of the farmers taking part in the evaluation program during its development, who said that  its distinctive black spikes were like the Atlas Mountains, “strong and proud”.

Unlike other durum wheat varieties grown in the region, Jabal’s wild genes enabled it to thrive despite some of the worst droughts farmers had seen in decades.

When plant breeders and farmers tested new durum wheat varieties between 2017 and 2021, the resilience of Jabal was immediately highlighted as a series of intense droughts across multiple sites saw it flourish and continue to produce grains, while all commercial varieties of durum failed. Farmers quickly began singling out Jabal, not merely for its ability to adapt to drought conditions, but also for its distinctive black spike, its high yields and the tastiness of the bread made from it.

The secret to this hardy wheat is in its family tree. Jabal was developed by crossing durum wheat varieties with Aegilops speltoides, sometimes known as goatgrass, a wild relative of wheat collected by scientists on the harsh dry plateaus of Syria.

Jabal, first evaluated under the Crop Trust’s Crop Wild Relatives (CWR) Project, has now been officially registered for cultivation by the Moroccan Ministry of Agriculture, following a two-year testing program across many Moroccan locations. Its commercial path has now started, with commercial seeds due to reach farmers’ hands in the next three years.

This progress holds particular significance to Moroccan farmers, who have faced severe economic and food insecurity as Morocco’s historical vulnerability to climate has increased in the past decade. Indeed, Morocco suffered the worst drought in 30 years in 2022, according to the latest figures from the Moroccan Ministry of Water and Logistics.

The development of Jabal is just one example of researchers using the wild cousins of domesticated crops, exploring their potential and crossing them with cultivated plants until the crop contains the desired traits of the wild relative, such as drought or pest resistance. The results may not be quite ready for commercial use yet, but can provide plant breeders with a range of novel traits and genes which may be crucial for future food security, as farmers across the globe are forced to adapt to a changing climate.

In the last five years, durum wheat has been the tenth most commonly cultivated cereal worldwide, with a yearly production average of 40 million tonnes (MT) from an estimated 16 million hectares, to make pasta, couscous and bulgur, which are all popular in North Africa and the Middle East.

Developing more climate-resilient durum wheat varieties like Jabal will continue to be supported by the Crop Trust through its Biodiversity for Opportunities, Livelihoods and Development (BOLD) Project, which is funded by the Government of Norway.

Durum wheat is just one of seven key crops whose genetic base the Crop Trust’s partners are continuing to broaden as part of the BOLD Project.

After successful efforts supported by the Crop Trust to use crop wild relatives under its Crop Wild Relatives Project, which was also supported by Norway, BOLD will work on seven crops, involving 45 partner organizations in 20 countries around the world. Its aim is to lay the foundations for new climate-ready varieties of rice in Vietnam, alfalfa in Kazakhstan and Pakistan, potato in Kenya, Ecuador and Peru, finger millet in Uganda and Tanzania, durum wheat in Morocco and Sudan, barley in Ethiopia and Tunisia and grasspea in Bangladesh and Nepal.

This process will directly involve farmers and other key stakeholders, thus ensuring that the results meet the needs of farmers and the demands of consumers.

“We are delighted that Jabal has finally been released for cultivation, after considerable hard work and perseverance. Crop diversity is vital for ensuring the resilience of global agriculture, and yet historically wild relatives have been underused, meaning that important traits that could benefit commercial crops have been largely inaccessible. However, thanks to the Government of Norway and their trust in our work, we are now able to use the BOLD Project to continue to make use of this treasure trove of diversity and help improve food security around the world.”

Mr. Benchaib, founder of the farmers’ association Benchaib Semences, which specializes in the multiplication and commercialization of crop varieties for Moroccan farmers, commented:

"Jabal is an exceptional variety characterized by its broad adaptation, especially to the driest conditions, and its high productivity and special grain color. We believe these characteristics will be beloved by Moroccan farmers. Our company Benchaib Semences is eager to include Jabal in our commercial portfolio. We are setting up a promotional program to ensure farmers will take full advantage of its genetic potential and see their production significantly improved."

“The name Jabal, which means “mountain” in Arabic, really helps tell this seed’s story. Indeed its wild parent reached us by crossing a mountain marking the border between Syria and Lebanon during the worst part of the civil war in 2013. Jabal is one of those crop varieties that attracts you immediately, with its tall stance, intense black spikes and plump fat grains. Many farmers said it was love at first sight when they saw it standing strong when all other varieties were being destroyed by drought. I am certain that many Moroccan farmers will benefit from this new drought-tolerant variety once it is made commercially available.”

Photos of the Jabal variety of durum wheat and the project can be found here.

Further information:
“A key part of this project is to involve farmers,” said Filippo. “We look to their knowledge and their capacity to identify the best traits in each variety, so that we can deliver something that actually fits into their farming system and improves their lives.”

Wild relatives: Crop wild relatives (CWR) are the cousins of our food crops that still grow in nature. Many have evolved to survive tough conditions, such as extreme heat, drought, flooding and poor soils. This means they can be a source of novel useful genetic diversity—diversity that plant breeders can tap into to develop more resilient food crops.

Crop Registration for Cultivation: The Jabal variety was registered for cultivation by the Moroccan Ministry of Agriculture in 2022, and it will now be multiplied on a larger scale for commercial purposes.

The Crop Trust is an international organization working to conserve crop diversity and thus protect global food and nutrition security. At the core of Crop Trust is an endowment fund dedicated to providing guaranteed long-term financial support to key genebanks worldwide. The Crop Trust supports the Svalbard Global Seed Vault and coordinates large-scale projects worldwide to secure crop diversity and make it available for use. The Crop Trust is recognized as an essential element of the funding strategy of the International Treaty on Plant Genetic Resources for Food and Agriculture. Learn more at www.croptrust.org.

About the BOLD Project

BOLD (Biodiversity for Opportunities, Livelihoods, and Development) BOLD (Biodiversity for Opportunities, Livelihoods, and Development) is a major 10-year project to strengthen food and nutrition security worldwide by supporting the conservation and use of crop diversity. The project works with national genebanks, pre-breeding and seed system partners globally. Funded by the government of Norway, BOLD is led by the Crop Trust in partnership with the Norwegian University of Life Sciences and the International Plant Treaty.

ICARDA, the International Center for Agricultural Research in the Dry Areas, is an international organization undertaking research for development. We provide innovative, science-based solutions for countries across the non-tropical dry areas. Our research aims to reduce poverty and enhance food, water, and nutritional security and environmental health, in the face of global challenges, including climate change. Learn more at www.icarda.org.