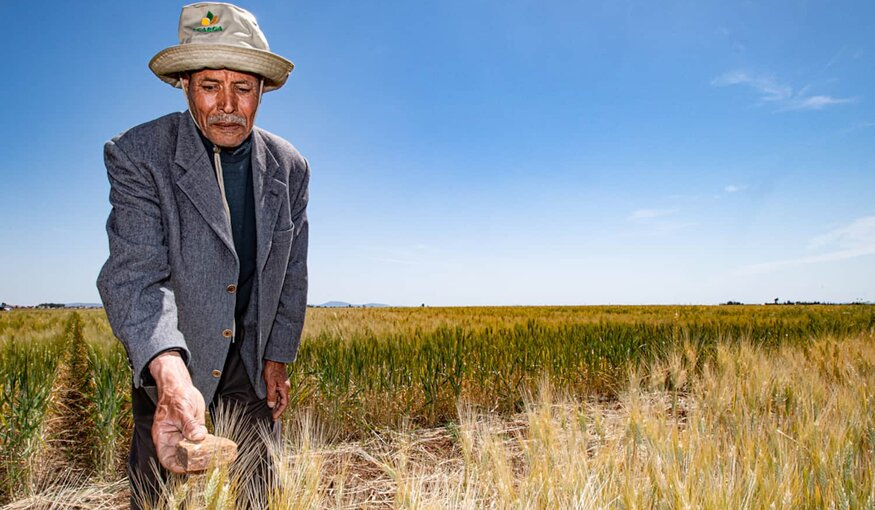 Abdellah Bounagua clutched the stone tightly in his weathered hands. With it, he could cast one vote. The durum wheat farmer from Marchouch in northern Morocco wanted to make sure he voted wisely.

He ran his hands through the eight rows of durum wheat, all of them a bit different. So many things to consider: the size of the spikelet, the color of the grain and awns, signs of pests or diseases, the amount of straw he would get. He pondered his selection carefully, and finally placed his one stone at the end of the row marked “Jabal.”

Filippo Bassi watched as Abdellah and two other local farmers each placed their stones at the head of different rows. Not all farmers value the same traits. Filippo called the farmers together and asked them to talk about their preferred selections. And they told him their stories—how they farm, the animals they have, why some varieties are better than others for their particular needs.

Filippo is hearing a lot of these stories lately. The durum wheat breeder from the International Center for Agricultural Research in the Dry Areas (ICARDA) recognizes that when it comes to selecting future crop varieties, farmers’ opinions matter. A lot. In the end, it’s the farmers who will decide if they will plant the new wheat varieties he develops. So it makes sense to get farmers involved as early as possible in the selection process.

Filippo is leading a three-year project that is evaluating crop wild relative-derived varieties of durum wheat, barley, and lentil. The project is one of several Crop Wild Relative Project activities supported by the independent, non-profit Crop Trust thanks to the Government of Norway. “A key part of this project is to involve farmers,” said Filippo. “We look to their knowledge and their capacity to identify the best traits in each variety, so that we can deliver something that actually fits into their farming system and improves their lives.”

Breeders around the world are lending their ears to farmers. “Participatory varietal selection or client-oriented plant breeding: call it what you like, the goals are the same,” said Ola Westengen, a specialist in farmer-breeder collaboration at the Norwegian University of Life Sciences. A generation ago breeders developed what they thought was in the best interests of farmers and delivered it to them in a process called “technology transfer.” That’s all changed. “It’s now about empowering farmers while at the same time ensuring that the new varieties meet the diverse demands of users.”

Filippo and his team are working with breeders from the Moroccan National Institute for Agricultural Research (INRA) and using a multi-step approach to ensure that the varieties that will be released by national programs will be the ones most appreciated by farmers.

“Our first task is to develop a shortlist of candidate varieties which we feel are better than older ones and will meet the farmers’ requirements,” said Filippo, an Italian who knows a thing or two about durum wheat. Filippo was awarded the 2017 Olam Prize for Innovation in Food Security for his development of a strain of heat-tolerant wheat, able to withstand the 40 degree Celsius temperatures of sub-Saharan Africa.

The candidate varieties are advanced breeding lines which have not yet been released to farmers by national programs. To generate this “shortlist,” ICARDA, together with its national partners and private companies from Europe and North Africa, planted multiple advanced lines at research stations across different locations in Morocco, including in very dry regions, irrigated areas, high elevations, and rain-fed plateaus. “We then can scientifically identify the best lines in terms of yield, disease resistance, and tolerance to drought and heat.”

“But farmers and I don’t always see eye to eye,” Filippo said. “For example, there was one candidate variety I really liked. Its yield was high, the grains were very big, and it had very good disease resistance. But when I showed it to farmers, they didn’t like it. They thought it was too short, and they wouldn’t get enough straw to feed their livestock. So, I had to reconsider. By learning the farmers’ preferences early on in the process, I was able to save time and money rather than releasing and promoting a variety that would have never made it to cultivation.”

Filippo and his team work with farmers to plant 6-10 candidate varieties in their own fields—not as small trial blocks but as decent-sized blocks that allow the farmer to adequately assess the variety. “We are working with more than 20 farmers around Morocco in a range of agro-ecological zones and will also expand some of our outputs to Senegal, Ethiopia, and Lebanon to achieve the best possible solutions for the barley, lentil, and durum wheat systems,” Filippo said.

Growing the candidate varieties in farmers’ fields achieves two objectives. “First, we can find out what the farmer thinks,” Filippo said. “And secondly, we can do our own standardized observations of the candidates in these different zones, like recording yield data and grain quality.” To get the farmers’ feedback, the researchers have prepared a questionnaire. But surveys can fall short in telling the full story.

Peer to Peer Without Fear

Filippo soon discovered that it can be challenging to get farmers to commit themselves to choosing and openly declaring their preferred varieties, particularly in the presence of scientists or other farmers. “It may sound strange, but stones are proving to become a wonderful way to encourage collaboration between scientists and farmers,” Filippo said. “We use the ‘selection by stone’ technique as a way to get farmers to openly share their thoughts in a fun and engaging way. It’s peer to peer without fear.”

“The random conversations that come out of our stone activity often tell us things that we would never have thought to ask in our surveys,” Filippo said. “For example, some farmers said they preferred wheat with black awns because that was their grandfathers’ preference and it made the best couscous. I would have never thought of asking that. Tradition and habit cannot be underestimated when developing new varieties.”

Naturally, the selection by stone process may be prone to bias, but Filippo isn’t particularly fussed about that. “Of course, we have to analyze these data in a scientific way, so we consider factors like farm size, age of the farmer, type of farming system, agroecological zone, and many other things. But most importantly, we are keen to consider those elements which we might not have thought of.”

But Does it Taste Good?

The selection process doesn’t end in the farmers’ fields. “We ask farmers to use in their own kitchen what they grow in the field,” Filippo said. “Taste can be the defining feature for farmers. In many cases, the durum wheat is grown only for self-consumption; it will never see the market. So, the variety which has the best taste or is better for making bread or couscous will normally be preferred.”

The project goes further than selecting the best varieties, though. It seeks to create greater profitability for farms by adding value to the farmers’ harvests. “Selling grain alone is minimally profitable,” Filippo said. “So, we are helping to strengthen the links among farmers and processors.” For example, the researchers have brought a farmer associated with the project together with a women’s cooperative that is looking to directly source grain for production of couscous.

Filippo and his team bring all of these data together and try to determine what is common in multiple farms so they can address not just the preferences of one farmer, but those of all farmers in a particular region. “In the end, we are recommending for release a variety that the farmers themselves have selected,” Filippo said.

With one stone, Abdellah Bounagua ensured his voice was heard. He was able to guide breeders like Filippo in their development of the varieties that will allow him, and other farmers like him, to prosper while the climate changes. That’s a big splash for such a small stone.

This article was originally published by Food Tank and featured on the Crop Wild Relatives (CWR) Project website.