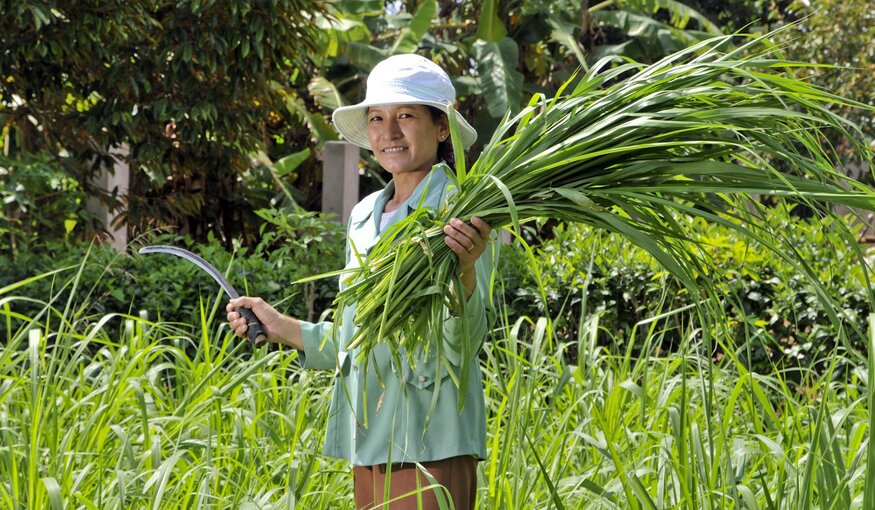 Former Executive Director of the Crop Trust, Dr. Geoff Hawtin, penned an editorial in the Daily Star Lebanon on the importance of crop diversity for the Mideast.

Agriculture is facing its biggest challenge in 13,000 years of history. With less land available for food production, less water, uncertain energy supplies and harsher weather conditions, the Middle East countries, as well as the rest of the world, now need to feed more people than ever before with fewer natural resources to do so.

The region is becoming ever more reliant on imported food, and there is a growing awareness among political leaders of the challenge at hand. Earlier this year, UAE Environment and Water Minister Dr. Rashid Ahmad bin Fahd declared that, “food security is an immediate priority. Development and execution of a core food security strategy is essential to provide a sustainable growth platform.”

Urgent steps such as these do need to be taken, but there is a simple and straightforward measure that can be adopted immediately, though it is often overlooked: the conservation of crop diversity and its use to develop new varieties that are more productive, nutritious and better able to withstand the ravages of pests, diseases and environmental threats.

As the Middle East countries import most of their food, they are fundamentally reliant on crop diversity found and used elsewhere in the world. In order to secure its food supply, it is critical that the Middle East nations support the safeguarding of the raw materials for the development of tomorrow’s climate-ready seeds. Supporting the work of the Global Crop Diversity Trust can help make this happen – to benefit the region, and the world.

Currently, billions of dollars are invested to acquire land outside of the region through bilateral agreements (mainly in Africa, but more recently in Europe and the United States) in order to have some control over food supply chains, and expand farming sectors. Saudi Arabia and the UAE combined already hold around 2.8 million hectares of overseas land. In the short term, Middle East resource wealth mitigates the risk of food price spikes. However, this investment method is risky, and only a partial long-term solution, relying as it does on the complexities of international trade regimes and legal systems.

This challenge is only going to become tougher. The region’s population is expected to grow by 40 percent between 2010 and 2030, demand for food is projected to increase by 50 percent over the next 20 years and prices are rising.

So what needs to be done? We must go back to the basic building blocks of agriculture and work systematically on crop adaptation and nutritional value. Breeding programs around the world are developing higher yielding, more drought resistant, more nutritious varieties of crops. But they need sources of those traits. Those sources are mainly to be found in the heirloom varieties and wild relatives of crops kept in genebanks.

The ancient Middle East’s legacy to the global food supply is enormous. Some of the world’s most important cereal and legume crops, such as wheat, barley, chickpea and lentils, originated here, from their wild ancestors.

These crop wild relatives have continued to evolve over millennia to survive in some of the most challenging conditions on the planet. If these traits can be transferred to our food crops through breeding programs, they could help provide us with a continuing, resilient and diverse food supply.

This is where the Middle East can make a key contribution – by drawing on the treasure of its own, unique plant heritage. But only an urgent, concerted effort by the countries of the region to protect and conserve crop diversity both in the wild and on farms will prevent its disappearance.

In practice, this means greatly strengthening the global system of local, regional and international plant gene banks, where seeds and their invaluable genetic information are stored in perpetuity, setting up nature reserves where crop wild relatives can grow safely, and supporting farmers to conserve and use traditional crop varieties. Such conservation efforts must also be coupled with more concerted and coherent support for plant breeding by both the public and private sectors. These various approaches complement each other in defending our food supply and natural ecosystems.

The Global Crop Diversity Trust is leading a worldwide response to this issue, and is working to guarantee the conservation of crop diversity, forever. We do so in association with, and with the support of the International Treaty on Plant Genetic Resources for Food and Agriculture, adhered to by 132 countries worldwide.

Working in partnership with agricultural research centers around the world, the Crop Trust is spearheading the conservation of crop diversity in genebanks. To give an indication of the breadth of this diversity, the collection of barley, chickpea, fava bean, forages, lentil and wheat at the International Center for Agricultural Research in the Dry Areas (ICARDA) genebank in Syria, with which I was heavily involved in the 1970s and 1980s, conserves a staggering 135,000 varieties from over 110 countries. The safety and sustainability of this collection is invaluable for the region’s food security.

The Crop Trust has already raised over $180 million from governments, foundations, companies and individuals around the world. In order to preserve crop diversity forever, we are working to increase that sum to $500 million by the time of our international pledging conference in early 2016.

The seminar this week in Dubai on the Role of Plant Genetic Resources for Food Security and Sustainable Agriculture, hosted by the International Center for Biosaline Agriculture, in collaboration with the Global Crop Diversity Trust, provides a clarion call for action to secure the genetic diversity needed to underpin the region’s – and the world’s – future food supplies. And key to this action is securing the necessary financial resources to sustain the work, not least through support for our endowment fund.

Let’s consider how we can adapt agriculture to overcome the many local regional and global challenges it faces today. We must act to build a sustainable, resilient food production system that overcomes the battle against hunger and ensures nutritional security for all. To build such a system we must be able to draw upon crop diversity, across the region and wider world, to our own immediate benefit and that of generations as yet unborn.

Dr. Geoffrey Hawtin is a senior adviser and co-founder of the Global Crop Diversity Trust, the sole international organization devoted to ensuring the conservation and availability of crop diversity worldwide. He is currently also senior technical adviser to the International Treaty on Plant Genetic Resources for Food and Agriculture. He wrote this commentary for THE DAILY STAR.