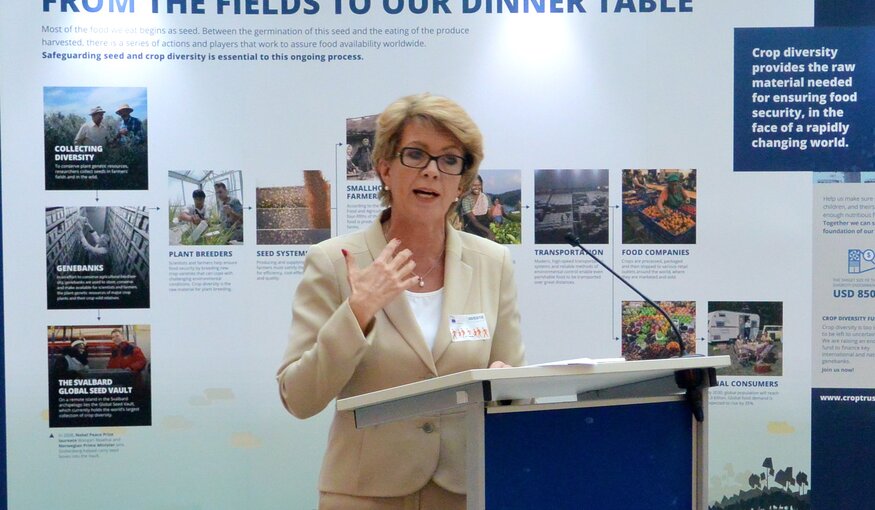 Europe must play a leading role in the global effort to protect crop diversity, argues Marie Haga in an exclusive editorial text published in The Parliament Magazine.

Our planet faces unprecedented population growth with the global population expected to hit more than eight billion over the next decade and exceed nine billion by 2050.

Such rapid population growth will mean an increase in global food demand estimated at perhaps 50 per cent.

Meanwhile, our ability to grow the crops needed to feed future generations is under threat from several challenges including climate change, crop pests and diseases, and pressure on agricultural land.

It would be naïve - and dangerous - to assume that Europe will be unaffected by these threats.

The globalisation and industrialisation of agriculture means we currently rely on only 150 crops for nearly all our nutrition. We are all interdependent when it comes to the crops we rely upon.

This global challenge requires a global response. We need to breed higher yielding, more resilient and more disease-resistant crops. Plant breeders and crop scientists need to have access to as much plant genetic diversity as possible – diversity that is stored in gene banks around the world.

The Global Crop Diversity Trust and our partners are the only international organisation devoted solely to securing the future of these gene banks and in sharing the vital resources they hold.

We are currently working on raising a $500m endowment by 2016, increasing to $ 850m by 2018. Investment income from this endowment will guarantee the future of these gene banks by providing their funding in perpetuity.

Both the European commission and all 28 EU member states are signatories to the international treaty on plant genetic resources for food and agriculture, which provides the framework within which our objectives are being delivered.

Several member states have also contributed to our work. Germany is not only host to our secretariat in Bonn, but has also already contributed over $11m to the endowment. The ultimate beneficiaries of this will include farmers and consumers in Germany and around the world.

For example, the average person in Germany consumes 60 kilos of potatoes every year, and German farmers spend millions on chemical fungicides to fight late blight, possibly the worst disease known in agriculture, a disease which is increasingly prevalent in northern Europe thanks to rising temperatures.

It causes €7.7bn worth of potato losses every year in the developing world and led to the Irish potato famine in the 19th century.

In order to develop new, more resistant types of potato, breeders are looking to the world’s largest potato gene bank, at the international potato centre in Peru, for the traits required, potentially in one of the many wild potato relatives conserved there.

The combined efforts of Andean hill farmers, Peruvian scientists and German breeders may provide an answer to this centuries-old problem.

But there is still much to be done. While several EU countries including Germany, Ireland, the Slovak Republic, Spain, Sweden and the UK have already contributed to the endowment, unfortunately most of the other member states and the commission itself have yet to do so.

We all agree that preserving crop diversity is essential to the future of the EU, its member states and the wider world. It is time for us all to make a concrete contribution towards achieving that goal.