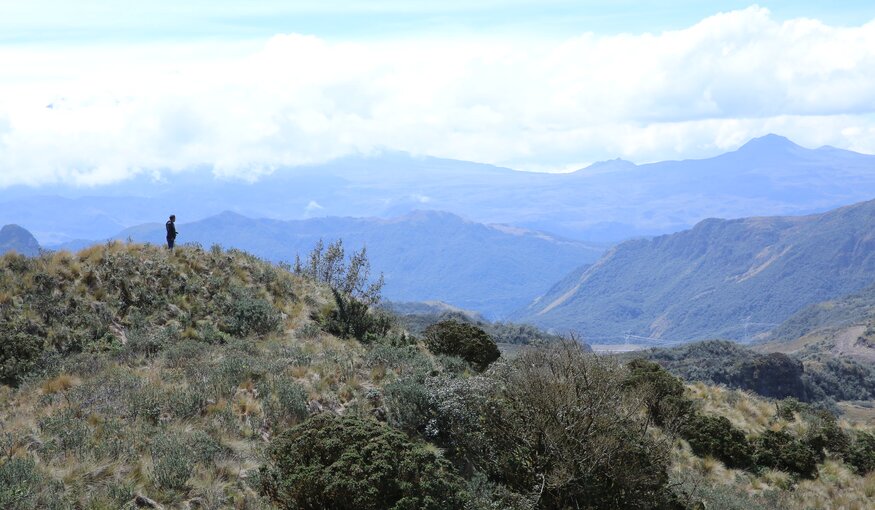 This year we celebrate the 50th anniversary of Earth Day. Climate change represents the biggest challenge to the future of humanity and to our foods. Although farmers have been adapting crops for thousands of years through the domestication process, today's climatic changes are so fast and so severe that crops are often unable to keep pace. That's where crop wild relatives come into play. These wild plants have been adapting to new climates without human intervention often for millennia - and it is this reservoir of largely untapped genetic variation that breeders can use to help adapt our crops to the challenges ahead.

We spoke with Crop Trust Senior Scientist and Head of Global Initiatives, Hannes Dempewolf, to learn more about crop wild relatives and how they help us take action to tackle climate change.

What are crop wild relatives?

They are the wild and weedy cousins of our agricultural crops. They’re not farmed, and sometimes they look quite different from the crops they’re related to. For example, some wild eggplants are green and have leaves with enormous prickles; some wild bananas have seeds so large and hard they could break your teeth.

And why are they of interest to scientists?

Crop wild relatives often grow in places where they have been subject to no or little human influence, evolving in lock step with their environments for hundreds of thousands of years. They’ve repelled pests and diseases, overcome extreme weather, and endured poor soils. That means they’re sturdy and resilient, even if they don’t produce much in the way of food for humans. Nevertheless, our food crops originate from wild species like these and humans have changed their evolutionary trajectories over thousands of years. That’s resulted in crops that give bumper yields of tasty, edible grains, for example, but sometimes it’s been at the expense of other characteristics that might also be useful – especially now – like tolerance to heat, drought, or flooding. Some crop wild relatives contain these traits, so they’re potentially very useful for crop breeders looking to make our domesticated crops more hardy and productive.

Have crop wild relatives already been used to improve our food crops?

Yes, they have been used extensively, with the main focus being disease resistance. A great example comes from the 1970s, when Asian rice farmers were experiencing huge crop losses due to the brown planthopper – a bug that spreads a rice virus called grassy stunt virus. Scientists screened thousands of wild samples of rice held in genebanks and found only one with resistance to the virus – a species called Oryza nivara. But one was all they needed. This wild rice was crossbred with domesticated rice to produce a new, resistant variety that farmers quickly adopted.

Currently, our partners at the International Potato Center in Peru are using wild relatives to develop new potatoes that are resistant to a disease called late blight – the fungus-like pathogen that caused the Irish potato famine in the 19th century. This is still a serious potato disease, particularly in developing countries, and it’s likely to become more of a problem as a result of climate change.

Other projects we’re coordinating are looking at resistance to high temperatures and drought in 19 different food crops. It is important to note that scientists only have access to all of these different kinds of crop wild relative seeds because they are made available under the terms of the International Plant Treaty, which provides the essential legal basis for seed banks all around the world to share these seeds with breeders and farmers.

Why is it important to collect seeds of crop wild relatives?

On the one hand, the fact that these plants still exist in the wild means they are inherently “survivors”, and potentially a useful resource for crop improvement. But the big question is how long they can continue to survive. Some crop wild relatives have become rare as their habitats come under threat: war, pollution, urbanization, deforestation, roadbuilding, and agriculture itself have all had an impact on the special habitats they occupy. Once a crop wild relative is lost, it’s lost forever – that’s hundreds of thousands of years of evolution wiped out in an instant. We support efforts by national partners  to collect them to ensure that their survival is not left to chance. It’s the first step in conserving them and making them available to farmers and crop breeders.

And all this is part of a project the Crop Trust is working on?

Yes, we call it the Crop Wild Relatives Project, but it has a longer name: Adapting Agriculture to Climate Change: Collecting, Protecting and Preparing Crop Wild Relatives. It’s a ten-year initiative – which is uncommon in today’s world of short project cycles – funded by the Government of Norway. It’s unique in that it includes a wide range of activities ranging from identifying places where wild relatives still grow, collecting and conserving them, to preparing them for use by breeders and farmers. As the project name suggests, we’re looking for traits from crop wild relatives that – once we have crossed them with domesticated crops – allow the crops to grow in tougher environments, which many crops will likely face as a result of climate change. Through the project we work with an incredible group of partners in more than 40 countries and have been managing the collecting component jointly with our partners from the Millennium Seed Bank at the Royal Botanic Gardens, Kew, in the UK.

What has surprised you the most about working on the project?

To just catch a glimpse of the sheer magnitude of biological diversity – and natural beauty – that is encompassed by the wild relatives of our crops is amazing. To then see how many populations of these wild species teeter on the brink of extinction – often as a result of human influence – is deeply troubling. And when considering the potential benefit of these species to our ability to feed ourselves, the idea of losing them is simply terrifying. The irony of how we actively destroy what could save us, is not lost on us – it underscores the crucial importance of this project.

Some of the locations where our partners have collected have also been absolutely stunning – from the lush forests of southern Nepal to the deserts of Chile, the range of environments where these wild species are found has been mind-blowing. It is really humbling to think of the thousands of years of evolution that have shaped these plants, and the results of which you’re witnessing when you find a crop wild relative thriving in its natural habitat. It also gives you a lot of optimism that with each find, you could be helping to change the course of agriculture for the better.

Read the full interview in our Crop Trust Magazine.