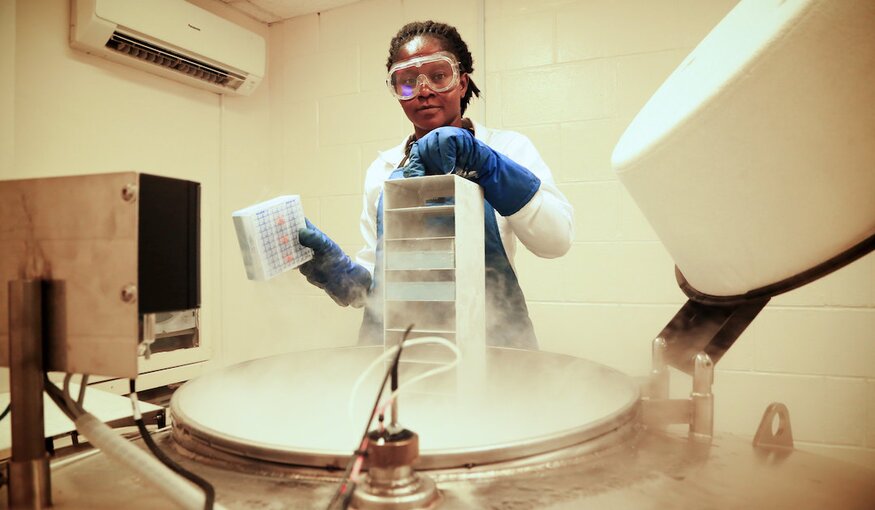 It might come as a surprise that there are many crops that can’t be conserved in the Svalbard Global Seed Vault. Aside from today’s star the banana, these include favorites like: cacao, cassava, coffee, potato, sweetpotato, coconut, tea, apples, and others.

That’s because some of these crops don’t produce seeds at all (like bananas). Others produce seeds, but the resulting plants don’t always resemble their parents (like apples). That’s a problem because when you conserve something, you want to be sure of what you’ll get if you ever need it again. Other plants have seeds that don’t react well to the conditions in genebanks. They’re called recalcitrant species, to distinguish them from the ones whose seeds can be dried and stored in the cold, which are called orthodox.

All these plants need alternative methods for conservation.

This is usually done by growing seedlings in jars or test tubes, known as in vitro conservation, or outdoors, in what are called field collections. These methods effectively place the crops on permanent life support: they need regular human attention, and are prone to natural disasters, pests and diseases.

But there is another way that is growing in popularity: cryopreservation. This is the process of conserving plant samples using liquid nitrogen. The samples are either suspended above or plunged into the liquid which, at minus 196 degrees Celsius, causes all biological and chemical processes in the plant to virtually stop. This results in the plants entering a deep state of quiescence. In theory, plant samples can be conserved almost indefinitely this way, but when taken out, they can be revived and carefully grown into full plants.

There are a few challenges with what’s commonly known as “cryo”. The lack of established protocols for some plants, and the sometimes-low revival rate of cryopreserved plants can cause many genebank managers a headache. But if these and other challenges can be overcome, cryopreservation is very likely to become routine in plant conservation efforts in the future.

In 2017, the Crop Trust, Bioversity International, and the International Potato Center commissioned an independent report into the need for, and state of, plant cryopreservation around the world. It highlighted the challenges and benefits of the technology, and called for an urgent global effort to accelerate its development and implementation, along with the establishment of a backup system for cryopreserved samples. It could lead to the creation of a global crop conservation facility even colder than the Svalbard Global Seed Vault.