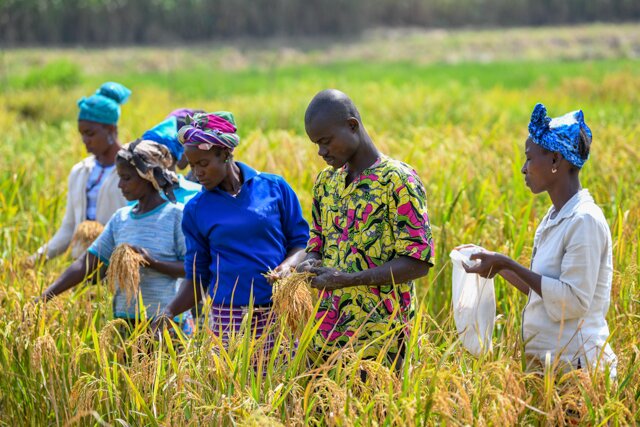 Some crop plants are just like people. They like to get their busy work done in the cool hours of the morning—before the heat of the day really hits.

African rice is a good example. The crop flowers at the crack of dawn, jumpstarting all its reproductive work. Then, when the day starts getting hot, its flowers close down to conserve resources.

That’s worked well for African rice for millennia, but now, with the climate changing, it’s getting hotter during the early morning and that’s causing a lot of stress for the rice.

But there’s hope. Scientists at the Africa Rice Center (AfricaRice), based in Côte d’Ivoire, have systematically explored the collection of rice diversity conserved in the center’s genebank and have discovered 15 samples that flower much earlier in the morning than varieties currently used by farmers.

When most people think of rice, they think of Asia. And for good reason, as pretty much all the rice we eat is in fact Asian rice (Oryza sativa). But Asian rice has a very rustic and hardy cousin in Africa – Oryza glaberrima.

People in West Africa have been eating African rice for more than 2,000 years. It’s primarily a subsistence crop and rarely is sold on the market. Generally, Asian rice is preferred in Africa, but many subsistence farmers prefer African rice’s taste and aroma, and even its reddish color.

West African farmers find African rice relatively easy to grow: its vigorous growth and spreading canopy help suppress weeds, and it is fairly resistant to local diseases and pests. Compared with its Asian cousin, African rice is, by all accounts, a more resilient crop.

It is better at tolerating weather extremes, variable water depths, poor soils, excessive iron and low levels of management. Farmers can also plant African rice a bit later in the season. The weather in West Africa can be quite erratic and rains can come later than expected, so a late-planting crop can be most appreciated. Some types of African rice mature much more quickly than Asian rice.

That can help save lives as it can be planted in emergencies when food stocks are getting low.

Stressing out in the heat

Despite its hardiness, African rice is coming under increasing stress as temperatures rise due to climate change. The Intergovernmental Panel on Climate Change (IPCC) projects that regions in Africa within 15 degrees of the equator will experience temperature increases higher than the global mean temperature increase, and that means hotter nights as well as longer and more frequent heat waves.

“Rice plants are sensitive to heat stress at the flowering stage, which is when it is reproducing and when the seeds – which is what we eat – start to form,” said Dule Zhao, a program leader at AfricaRice. “If rice is subjected to high temperatures within an hour or so after flowering, the plant becomes infertile and will not produce grains.”

Scientists at AfricaRice suspected that some African rice samples conserved in its genebank might have genes for ”early morning flowering” and thus be able to escape from heat. The  Rice Biodiversity Center for Africa conserves more than 21,000 samples of rice, of which about 17% are African rice.

“In order to best use this collection of African rice for crop improvement, we must carefully characterize as many samples as possible to assess the variation,” said Marie-Noëlle Ndjiondjop, the head of the AfricaRice genebank. In a pre-breeding project funded by the Government of Japan and supported by the Crop Trust, scientists planted more than 2,000 samples of African rice in controlled field conditions and observed the exact time the rice flowered in the morning.

“We were thrilled to identify, over two years of hard work, 15 samples which showed traits not only for early morning flowering but also early peak spikelet opening time,” said Venuprasad Ramaiah, the rice breeder who led the AfricaRice project, now at the International Rice Research Institute. “This provides a goldmine of genetic diversity for rice breeders. Now that we have selected the 15 samples, breeders will be able to use that germplasm in their breeding programs to develop heat-tolerant rice varieties which are also high yielding.”

The AfricaRice researchers didn’t limit their work to only looking at early flowering traits. Yields for African rice can suffer when stagnant flooding occurs. The researchers had previously selected some promising samples with exceptional levels of tolerance to such flooding.

“This project beautifully complements the work we’ve been doing with Asian rice in our Crop Wild Relatives Project,” said Benjamin Kilian, who coordinated the project at the Crop Trust. “We’re excited about the project’s achievements, which tie in well with pre-breeding work we’re doing to transfer these beneficial traits for earliness also to Asian rice.”

These early flowering materials will be available to rice breeders and genetic resources specialists globally for study and to develop heat-tolerant rice varieties. Breeders can access the data on the AfricaRice Genebank Information System (ARGIS), the Genesys website and the Germplasm Resource Information Network (GRIN-Global).

“This is a clear example of how conserving crop diversity for the long term, and studying it, can help us to adapt our food crops to new, unforeseen challenges,” said Stefan Schmitz, Executive Director of the Crop Trust.

“This project just skimmed the surface. Those 15 samples represent a mere 0.07% of the genetic treasure safeguarded by AfricaRice. But that might be all we need to help small-scale farmers in Africa feed themselves and their families for years to come. Until the next problem comes along, of course.”

This project was made possible thanks to the generous financial support of the Ministry of Agriculture, Forestry and Fisheries of Japan (MAFF).

All material generated by this project will be shared under the terms of the Standard Material Transfer Agreement (SMTA) within the framework of the multilateral system of the International Treaty for Plant Genetic Resources for Food and Agriculture.

Text when toggle is open