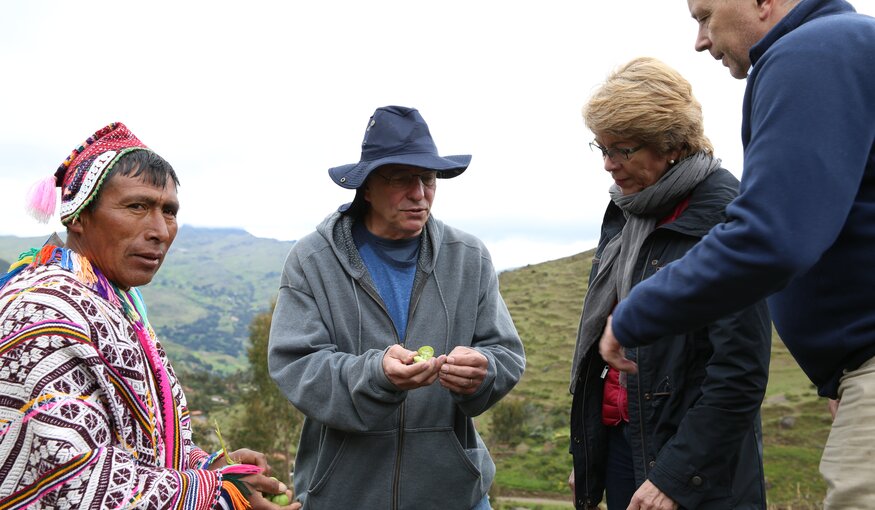 Dave Ellis, Genebank Manager at CIP in Lima, Peru, shares with our Crop Topics readers his views and concerns regarding the present state and future challenges of plant genetic resources conservation around the world.

There are about 1,750 genebanks worldwide, and they come in all shapes and sizes. Only about 7% have collections that exceed 10,000 accessions. There’s strength in that diversity, of course – diversity is what we’re all about. Worryingly, though, some genebanks lack the infrastructure, resources, expertise, long-term commitment, or political will to adequately collect, document and conserve good quality germplasm.

I have seen genebanks where seed is drying out in the open and there is evidence of mice eating the seed. In other cases, as much as 50% of the seeds stored are dead.

If germplasm is not of high quality, if it is not conserved properly, it will die, and it may be lost forever. This is a challenge for many – perhaps most – genebanks.

We would not have crops today if we had not always had diversity within crops, and within their wild relatives, for farmers to select from. Farmers have faced unimaginable challenges before and there’s every reason to expect that they will continue to adapt agriculture, given the right tools.

At CIP, we are known for our potato collection (though we also guard global collections of sweet potato and nine Andean root and tuber crops). Our cultivated potato collection consists of 4,500 different varieties, some of which no longer exist in the farming communities from which they were originally collected. We work with these communities and give them back the potatoes their grandparents may have farmed.

For example, we found in our collection potato cultivars that were collected in the last 30 to 40 years in Peru’s Sacred Valley, and gave those varieties back to the communities that live in the Parque de la Papa, close to Cusco. Now they are growing and testing them again. This is really important, as the Sacred Valley is one place in the world where we have documented evidence of the need for flexibility in potato cultivation due to a rapidly changing climate.

Our collection of wild potato relatives is missing some known species completely. That is a very obvious gap. But is it important?

Given limited resources, how much priority should we give to collecting and preserving a species that we don’t have? In most cases we have no idea of its value. Is it better to spend the resources on a species that we already have a few samples of, but we know has genes of critical importance today – such as resistance to drought, insects or disease? I would personally give this priority over a species we don’t have at all, because we know it’s something that breeders and farmers actually want, and we are ultimately here for them.

But needs also change. It’s a question that we’re always asking, because there is no single answer: how do we prioritize?

It’s a huge disconnect and it’s to our disadvantage. We have to change this.

What we need is a paradigm shift in how we manage genetic resources globally. Breeders and genebank staff need to work closer together and they both need to work with researchers and partners on-farm. We are one big continuum.

We must work together to build a global information system that will allow us to utilize next-generation bioinformatics – to combine everything that we know about an accession, from its DNA to the local knowledge surrounding it.

The Global Crop Diversity Trust is offering us an opportunity to achieve many of these things for the first time. The Crop Trust has brought together the international genebanks of the CGIAR and helped us become a stronger community. Together, we are helping to build a truly global system for crop genetic resources conservation and use.

Dave Ellis has been involved in the preservation of plant genetic resources for decades. He is currently the Leader of the Research Program on Conserving Biodiversity for the Future, as well as the Head of the Genebank at the International Potato Center (CIP) in Lima, Peru. At CIP, he is charged with overseeing the maintenance of the global in-trust collections of potato, sweetpotato and Andean Root and Tuber Crops.

Dave has collaborated with CIMMYT in the collection of teosinte (the immediate ancestor to maize) in Mexico, worked with native American tribes to preserve their plant genetic resources – principally Fraxinus (ash) seed – and is currently working with indigenous communities in the Parque de la Papa. He is also a member of the scientific advisory committees for ANDES and SeedSavers.