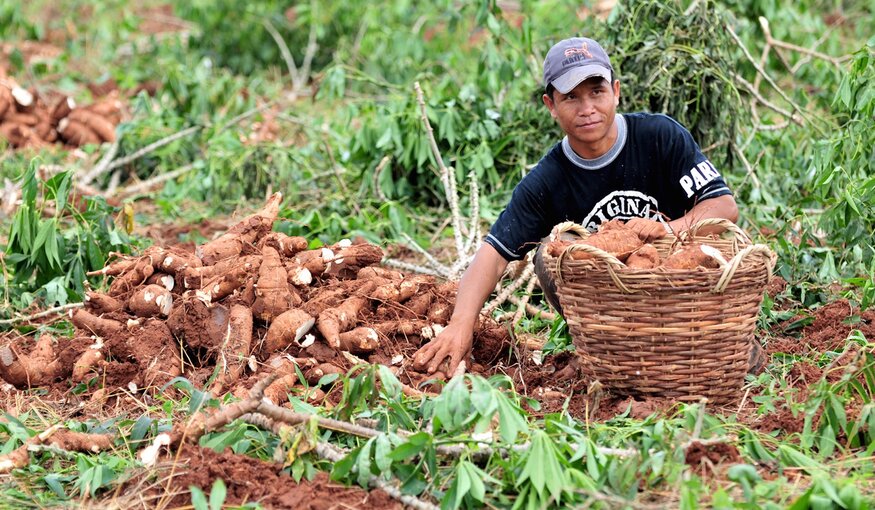 For poor farmers in the tropics, there are few upsides to climate change. Cassava, however, is set to take off under higher temperatures – if pests and diseases don't drag it down.

Cassava is a tough crop that produces its carbohydrate-rich roots in poor soils and under unreliable rainfall. Processed in a multitude of traditional and industrial ways, the crop provides food security and incomes for hundreds of millions in Africa, Latin America and Asia, including many of the poorest. The root can be stored in the ground for two years or more, and even the leaves are an edible asset, rich in vitamins and protein.

Fortunately for all who depend on it, cassava appears to be the rare crop that will flourish under climate change. It excels in high temperatures and persists through drought, falling dormant until rains return. Researchers predict that with a temperature rise of 1.2–2°C, cassava will far outpace other major crops in sub-Saharan Africa, where two-thirds of the world's cassava is grown. In most regions its productivity will even be boosted – by an estimated 10% in East Africa.

On the other hand, it may be too early to forecast a sunny future for cassava. Climate change is also raising the risk of disastrous epidemics. Cassava Mosaic Disease has battered African cassava for a century, devastating production until new sources of resistance are found. Now a new threat, Cassava Brown Streak Disease, threatens to cut Africa's harvest in half by rotting roots in the ground. Most worryingly, the whiteflies that spread these diseases also seem to be thriving under climate change.

When cassava anywhere in the world is under threat, plant breeders look to the tropics of the Americas. It's here that Manihot esculenta was first domesticated, long before Portuguese trading ships brought the plant to Africa and Asia.

Traveling the world under many names – yuca, manioc, mandioca, tapioca – the crop became established and locally adapted in Africa and Southeast Asia over a matter of centuries. In recent times this local diversity has begun to diminish, thanks to diseases in Africa and the industrialization of the crop in Asia. However, the majority of unique landraces still exist in South and Central America, alongside a whole family tree of wild relatives.

CIAT's collection also contains samples of some 30 wild species in the Manihot genus. More than half of these species have been used by breeders to introduce traits into new cassava varieties, from Cassava Mosaic Disease resistance to drought tolerance and higher protein content.

Ex situ conservation is needed to secure cassava diversity against disease epidemics and the loss of wild habitats, but collections of this vegetatively propagated crop require constant maintenance.

Cassava can't normally be conserved as seed. Farmers multiply and share their material through stem cuttings, which have a very brief shelf life. To conserve an accession genebanks can either plant and re-plant stems in the field, or keep tiny plantlets in test tubes under slow-growth conditions. Either way, accessions needs to be planted and regenerated every 1-2 years, making maintenance of a large genebank an expensive, never-ending task.

The conservation of wild species presents its own headaches. While certain types can be kept as seed, others require special growing conditions – and some are the size of small trees. Only two institutions engage in this task: CIAT, and the Brazilian Enterprise for Agricultural Research (EMBRAPA) working with the University of Brasilia.

Unfortunately, most of this wild diversity exists in areas like the Cerrado of Brazil, where human activity is quickly chipping away at it. Where a survey in 1970 identified 41 wild Manihot habitats in the grasslands of the Cerrado, a follow-up trip in 2005 found that all but one of these had disappeared.

To build a more efficient and secure global system for cassava conservation, the Crop Trust supported research to perfect cryobanking, a technique for conserving plant tissue in liquid nitrogen – freezing cassava diversity for a warmer future.

Cryobanking is the best way of conserving vegetative material long-term, giving it the same durability as seeds. However, CIAT had recorded poor recovery rates for cassava frozen at -196°C, making the process too risky to entrust with such a precious global resource. Thus, the Crop Trust brought CIAT researchers together with scientists from Belgium's Katholieke Universiteit Leuven, home of an international cryobank of banana and plantain, to develop better protocols. After four years of fine tuning, large-scale cassava cryobanking is set to begin for the first time at CIAT.

In a separate effort, Crop Trust partners in the Crop Wild Relatives project gathered together all available data on existing collections of cassava relatives and the locations where they were collected. This data was used to create a gap analysis, mapping out regions where the greatest un-collected diversity of wild Manihot might still be found. The Crop Trust will support national institutions in collecting more of this diversity while it still exists, and making it available for improving and protecting the cassava of the future.