During the last couple of months, we have been organizing events and activities all over the world – from North and Central America to Australia and New Zealand.

Happy days in the Asia-Pacific Region

Just now, we are wrapping up the Annual Genebank Managers (AGM) meeting. The Australian Grains Genebank (AGG) generously hosted this year's week-long gathering, which brought together scientists from across 18 countries to learn from each other and discuss all relevant aspects of genebank operations. It is an amazing group of people with enormous knowledge and deep commitment. They are all eager to start working on the new six year Genebank Platform, which will further safeguard the most important crop collections in the world and make them better available to farmers, breeders and scientists. 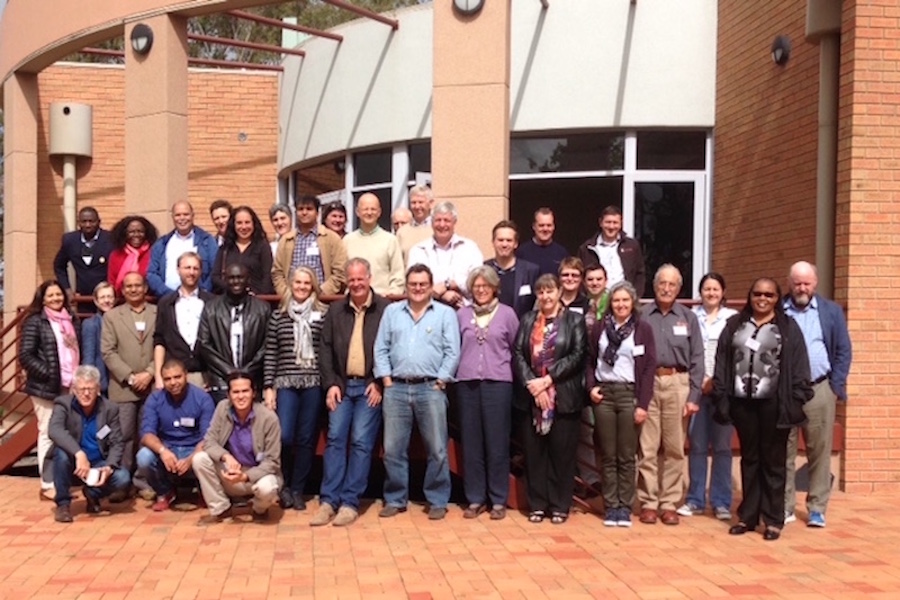 On my way to the AGM, I had the privilege to first stop in Wellington to sign a NZD 2 million donor agreement with the New Zealand Ministry of Foreign Affairs and Trade. I was also honored to meet the Foreign Minister who showed a strong commitment to agriculture. We should ideally have many more of those around the world!

Moving on from Wellington, I went to Canberra to sign two donor agreements: an AUD 5 million grant to the endowment and a project agreement between Australia’s Department of Foreign Affairs and Trade, the SPC and the Crop Trust "Strengthening Crop Conservation Post Cyclone Winston." The CePaCT genebank in Fiji was damaged during the tropical cyclone Winston that devastated Fiji this past February, leaving their facilities with prolonged power cuts, leaking air conditioning, and destruction of part of their breadfruit plot. The project will contribute to the recovery.

We are most grateful to Deputy Secretary Ewan McDonald for a very constructive meeting and for hosting a Roundtable event that brought together several of our partners (SPC, ACIAR, GRDC, DFAT, the Crawford Fund and others) to discuss the current state of plant genetic resources conservation in the Pacific. Later in the day the Crawford Foundation hosted a well-attended open meeting focusing on Crop Wild Relatives.

Thanks also to Tim Fischer, our Australian Board member – always supportive and a source of inspiration. 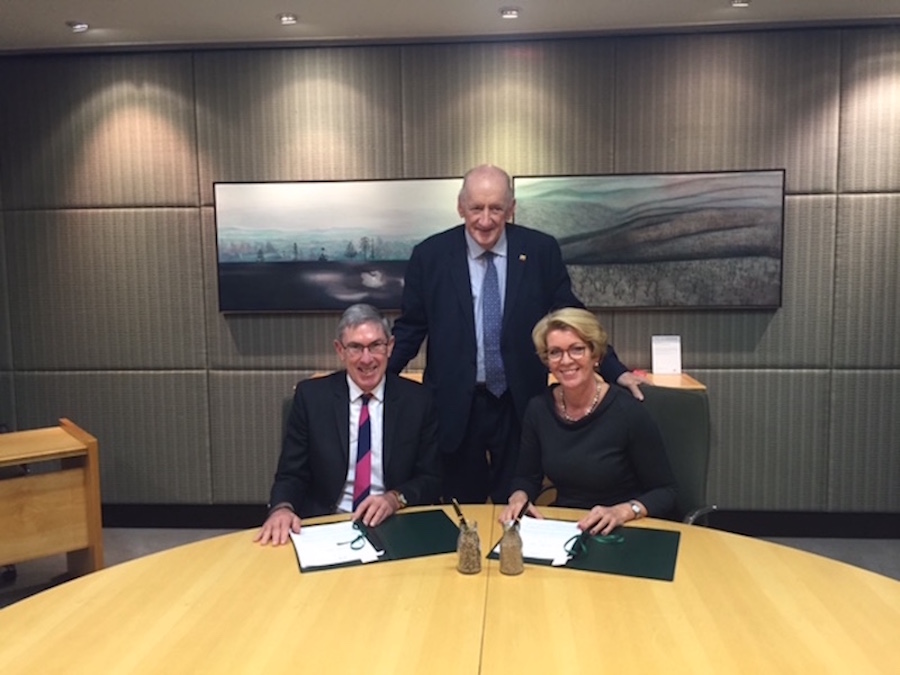 Thank you very much to the Netherlands

The 15th meeting of the Donors’ Council took place in Rome, Italy on the 21st of October. Chairing the Donor's Council for the first time was Ambassador Hans Hoogeveen, Permanent Representative of the Netherlands to the FAO. In the meeting, the Netherlands announced a contribution to the Crop Trust Endowment of EUR 6.2 million. We are very grateful. 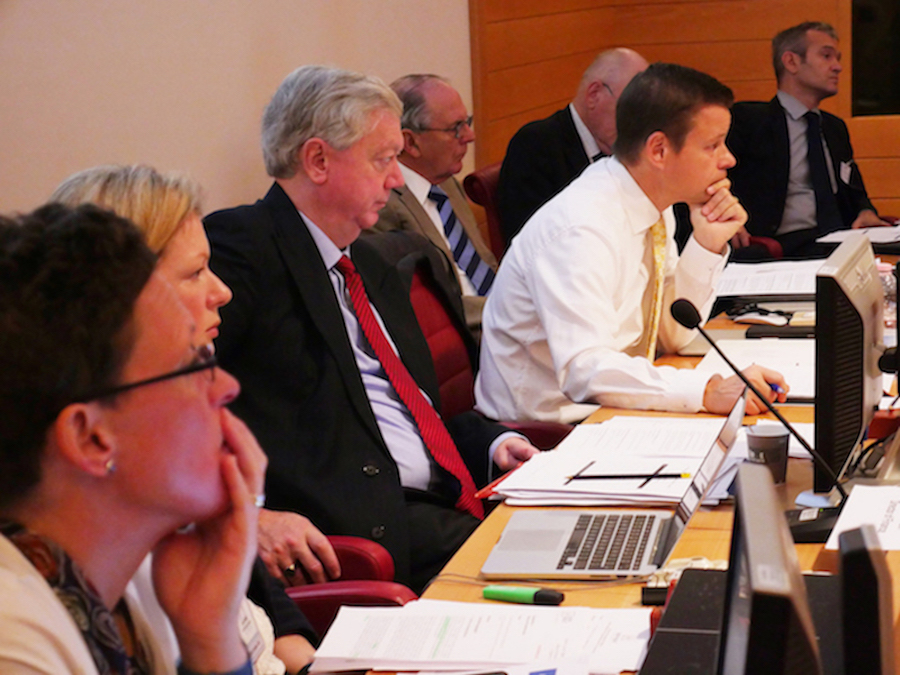 The Donor Council reviewed the Crop Trust’s new Strategic Work Plan and Strategic Results Framework; reappointed the Executive Board Chair, Ambassador Walter Fust for one more year; and reappointed Board member Mary Ann Sayoc for another three-year term. Congratulations to both of you.

The Donor’s Council also approved that Crop Trust management move forward with the proposed concessional loan by KfW of Germany, provided that we come to appropriate borrowing terms by mobilizing an additional donor grant in conjunction with the loan offer. Donor loans will allow us to carry out our urgent work in the near-term. It will in effect constitute bridge-funding while we build up the endowment.

Following the Donor’s Council, the Crop Trust Executive Board met for the second time this year on the 24th and 25th of October. We are privileged to have a strong Board that gives us valuable guidance. The Board reaffirmed the loan approval on conditional terms, and among other things approved our new procurement policy and the budget for 2017.

The Board engaged actively in the discussion of our updated Work Plan for 2017 to 2020. The Work Plan, more than in previous years, opens the door for supporting select national crop collections. Underpinning the Work Plan is a new strategic results framework that sets ambitious but realistic, measurable targets for our work.

Collecting in Costa Rica and visits across Latin America

On a lighter but very informative note, our Crop Wild Relative Project (CWR) Manager Hannes Dempewolf, our Communications Manager Luis Salazar, and I had the opportunity to accompany our Costa Rican collecting partners (University of Costa Rica) on a mission to collect wild rice. After Costa Rica, we continued on to Guatemala where my two colleagues joined our partner ICTA (Science and Technology Center) to look for rice, beans, potato, sweet potato and eggplant wild relatives. I couldn’t go on the collecting mission in Guatemala but had a chance to meet our partner.

I am simply very impressed with our CWR partners and their dedicated work. Collecting missions require stamina – getting required permissions is not easy, and doing the actual collecting in demanding and partly unfriendly environments is more than challenging.

We now have collecting agreements with 24 countries and soon await the 25th. Thanks a lot to all of our dedicated friends and partners in all of those countries who do invaluable work. The handful of seeds they collect in the wild might well be a game changer in our breeding efforts in the future. Quite fascinating.

The visit to Latin America also gave us the opportunity to meet with the International Cocoa Genebank in Trinidad and the Centro Agronómico Tropical de Investigación y Enseñanza (CATIE) in Costa Rica. We were pleased also to meet the Minister of Agriculture in both countries.

Since my last update, the Svalbard Global Seed Vault has been opened twice.

19th of September: The U.S. Department of Agriculture made its second largest deposit in Svalbard to date, depositing nearly 20,000 accessions, including green bean, barley wheat and lovegrass.

18th of October: 25 new boxes containing more than 10,000 accessions from 9 different institutions were sent to the Vault. This deposit included material from two new depositors - the Genetic Resources Institute at the University of Banja Luka in Bosnia and Herzegovina and Temasek Life Sciences Laboratory in Singapore.

It’s wonderful to see a renewed commitment from existing depositors to safeguard their resources, and it’s comforting too to know that new countries and institutions are realizing the importance of a global back up and joining us in this global endeavor.

Much more could have been mentioned, like excellent meetings in Washington - on Capitol Hill, with WWF, Conservation International and a seminar on building bridges between in situ and ex situ conservation at the wonderful Oak Springs Gardens organized by our Board Member Peter Crane, but we leave it here for now.

Next week, we move on to New Delhi where we are invited to present the Crop Trust’s role within the global system of ex situ conservation at the very first International Agrobiodiversity Congress (IAC) from November 6th to 9th.

Lastly, we invite you to view our latest #CropsInColor gallery on maize diversity in Southern Africa, as well as read the latest Crop Wild Relatives policy brief and our very first interactive story, “Something Worth Fighting For,” on ICARDA’s move from Syria to Morocco and Lebanon, following their inauguration last month.

Best regards from all of us in Bonn,