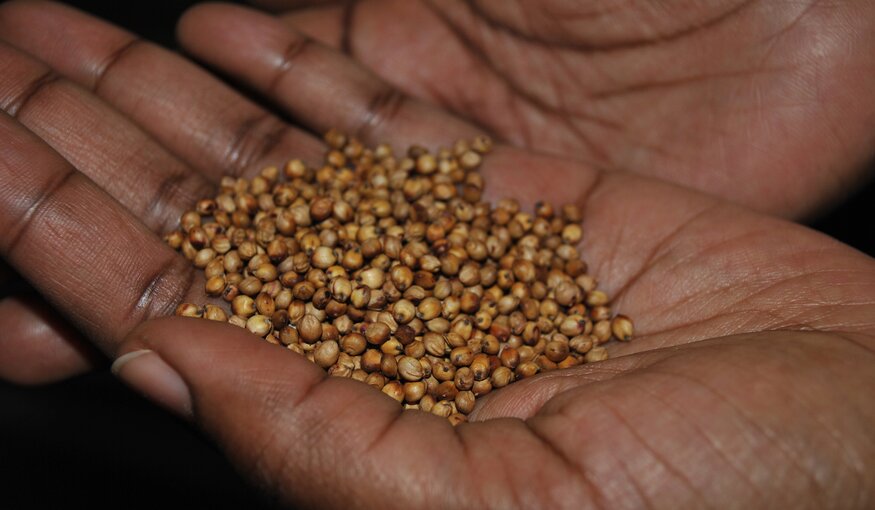 Sorghum comes in a strong fifth among the world's important cereal crops – and nothing else matches its diversity of forms and uses.

A stalwart of hot and dry areas, sorghum demands few inputs and provides more than just grain in return. Farmers cultivate sorghum for porridges, breads and noodles; for animal fodder; to brew beer and wine; to extract sweet syrup; and to make baskets and brooms. The often towering stems can be used to build fences and houses, and after everything else is gone, the dry stubble fuels cooking fires.

90% of area planted under sorghum is in the developing world, and often in hot, marginal and drought-prone regions, where crops like maize or wheat would be a foolish bet. However, the crop's wide range of adaptations allow the right types to be grown under all sorts of conditions, from cold latitudes to lofty altitudes.

In some African farming systems, sorghum even provides its own bird repellent. Farmers have long kept hungry birds away from their crops by selecting varieties with a high tannin content, making the grain much less appetizing. But the farmers know the secret: the sorghum loses its bitterness when it's cooked or fermented.

The breadth of diversity created by farmers and environments around the world is what keeps sorghum going in tough times. Sorghum research has progressed by using, and maintaining, this genetic wealth.

The major international collection of sorghum is held in the genebank of the International Crops Research Institute for the Semi-Arid Tropics (ICRISAT) in India, where more than 36,000 samples are conserved. National collections exceeding 4,000 samples are also kept by the USA, India, China, Brazil, Russia, Ethiopia, Zimbabwe, Australia and Sudan. Perhaps most unique is the collection of broomcorn at the Institute of Field and Vegetable Crops in Serbia, which conserves 152 samples of the special long-panicled sorghum used for centuries to make broom bristles.

Drawing on these collections, breeders have boosted production greatly by making wide crosses between the five races of sorghum existing in different parts of the world. In India, crosses between the Caudatum, Guinea and Durra races have combined their strengths and generated hybrid vigor. The benefits were measured in a 40% income boost for millions of farmers.

On the other hand, such improvements have brought their own problems. As high-yielding varieties began to spread, it became clear that the large heads of tightly packed grain were liable to become moldy in seasons of high rain. Grain mold and downy mildew continue to cause crop losses and make grain unmarketable and unhealthy to eat. Much sorghum research in recent decades has gone into solving this problem, and some of the answers have been found in farmers' own mold-resistant landraces.

The Crop Trust has supported work to keep sorghum diverse. Genebanks in 21 countries have collected, regenerated and duplicated material, hunted for important traits, and brought material to farmers to test.

In India, an ICRISAT mini-core collection of 242 samples was evaluated for sources of head mold and downy mildew resistance. Fifty of these, from four different races and 21 countries, revealed diverse sources of protection from mold. Only six proved resistant to downy mildew, and a single accession from Yemen was discovered to have dual resistance.

In Tanzania, researchers from the Mikocheni Agricultural Research Institute and National Plant Genetic Resources Centre evaluated 200 accessions from the country's collection for tolerance to drought and aluminum toxicity. Aluminum in acid soils is estimated to limit crop production on 30-40% of arable land, and most of the material evaluated in Tanzania became stunted under high concentrations. However, five accessions showed better growth, representing rare and valuable sources of aluminum tolerance.

Meanwhile, a series of activities in Ghana, Mali and Nigeria opened up exchanges between farmers and genebanks. In Ghana the CSIR Savanna Agricultural Research Institute collected sorghum from farmers across three regions and tested it alongside the Institute's existing genebank materials. Farmers in the country's Upper East region then experimented with selected lines in participatory on-farm evaluations, and the favorites were shared widely through field days.

At home in heat and drought, sorghum is due for its time in the spotlight. As it helps farmers adapt, it may even come to fuel a lower-carbon economy.

As more regions become hotter and dryer, there is every reason to take sorghum as seriously as the other major cereal crops. Its ability to produce food and fodder through prolonged droughts is a life-saver for millions of poor households.

However, sorghum can also yield spectacularly under good conditions.  Farmers in the Bahia region of Mexico report annual yields of more than 13,000 kg per hectare. This easily surpasses the average yield of maize in the United States.

More and more sorghum is also being grown for energy. The grain can be fermented to produce carbon-neutral ethanol fuel, and now this activity is moving to the sweet sorghum varieties, which were originally cultivated in the southern United States to extract delicious syrup from the stems. In countries like Brazil and India, the stems of these towering varieties are providing feedstock for biofuel at a lower input cost than either sugarcane or maize.  And with a similar grain yield to other popular varieties, it's possible that many farmers will be able to grow these without sacrificing the secure grain harvest that has made sorghum the lifeline of millions.