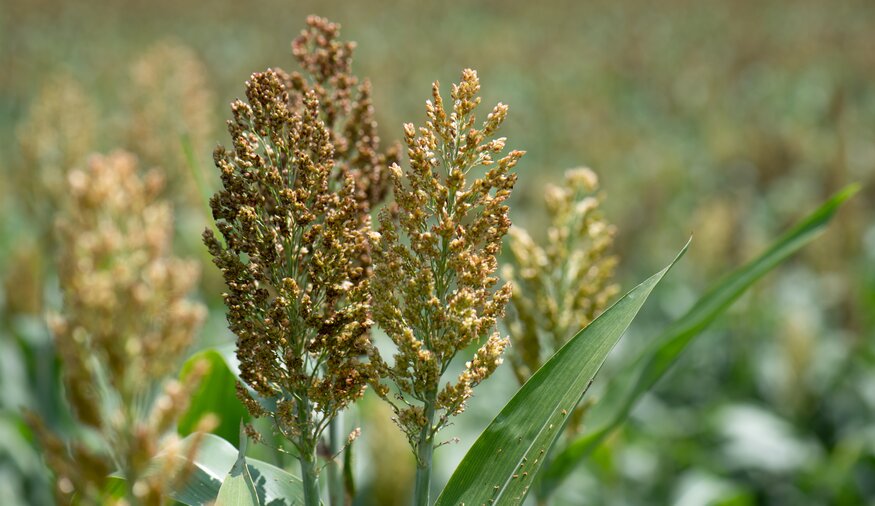 The arid-zone grain sorghum can be made even more tolerant of drought, new research shows.

Drought tolerance in sorghum—the world’s fifth most important cereal crop—is measured in a number of different ways, including by looking at a key genetic trait known as “stay-green.” To date, plant breeders have relied on only a few sources of this trait to improve the crop, but this is changing.

“It’s not prudent to use only one or two sources of diversity, because over time the crop may lose its resilience and you are left with nothing,” says Damaris Odeny, Theme Leader Biotechnology for East and Southern Africa at ICRISAT in Kenya. “We need to breed crops using diversity from a range of environments, with different climate conditions and with different mechanisms for tolerating drought, so they can endure for a long time,” she says, adding, “But the same few parents have been used over and over again in sorghum breeding, probably because breeders don’t know what else is available.”

In fact, there is plenty of interesting diversity in genebanks such as Kenya’s Genetic Resources Research Institute. This genebank contains both crop wild relatives (CWR) of sorghum, its undomesticated distant cousins, and landraces, also called heirloom or farmer varieties. The researchers explored the potential of this collection to breed better sorghum.

The findings are reported in a paper co-authored by Odeny and published in a special issue of Crop Science on the use of CWR in adapting agriculture to climate change.

In a study on wild carrot in Bangladesh and Pakistan, researchers identified plants with heat and drought tolerance, with tests showing they performed well even in salty irrigation water.

By contrast, exploratory experiments on sweetpotato found that the cultivated crop has a higher tolerance to drought conditions than its mostly tuber-less wild relatives, indicating that the tasty tuber we grow the crop for may double as a tool for drought tolerance.

In studies on alfalfa, durum wheat and eggplant, researchers were able to go one step further and develop hybrids between wild and cultivated plants to start to introduce new genetic diversity into domesticated crops. They evaluated these hybrids for drought tolerance and provided a solid foundation for other breeders to eventually take stronger varieties to market.The studies were conducted in partnership with the Crop Wild Relatives Project, managed by Benjamin Kilian and his team at the Crop Trust.

“Wild species and landraces have developed traits that enable them to deal with extreme environments, but in some cases these are missing from more advanced varieties,” says Kilian. “With the onset of climate change—and more heat waves and droughts, more severe weather—finding these traits and using them to breed more resilient crops is essential.”

Sorghum’s stay-green trait for drought tolerance has received a lot of attention, as it is unique to the crop.

Whereas most cereal crops must be removed from the field after harvesting and then resown, some very special sorghum varieties will stay green after the grain is harvested, and then flower and produce another crop, even during a drought.

In their study, the scientists found many new sources of the stay-green trait by comparing the performance of wild seed samples, landraces and improved varieties under water-stressed conditions.

The experiments also resulted in unexpectedly high yields from landraces.

This, Odeny says, reveals a lot about the state of sorghum breeding.

“Sometimes, when a crop doesn’t get enough attention from breeders, farmers end up developing their own new varieties just by selecting the best-performing plants for their local conditions,” she says. “The fact that some landraces performed better than the specially bred varieties shows that so much potential is already there, if it can only get more breeding attention.”

Breeding could also make sorghum more competitive as a crop, she says.

“In countries such as Kenya, maize has largely taken over from sorghum, because so much work is done on it. Meanwhile, beautiful traditional crops like sorghum are being set aside.”

Identifying these novel sources of stay-green opens up possibilities for using wild relatives and landraces in pre-breeding, the process of identifying and isolating these traits and incorporating them into existing crop varieties—and Odeny is excited to move into this next phase.

“Our findings have already generated a lot of discussion, globally,” Odeny says. “Several breeders have contacted me, looking to work with our material. This is a great sign.”

For Kilian, too, results such as these validate the use of crop wild relatives and landraces in efforts to help agriculture adapt to climate change.

“Drought tolerance is a very complex trait, so this work is challenging,” he says. “But we are seeing that it can be done. Soon, farmers will see the benefits right in their fields.”

The next blog post in this series will cover research published in the recent special issue of Crop Science on identifying useful traits in crop wild relatives and developing hybrids.