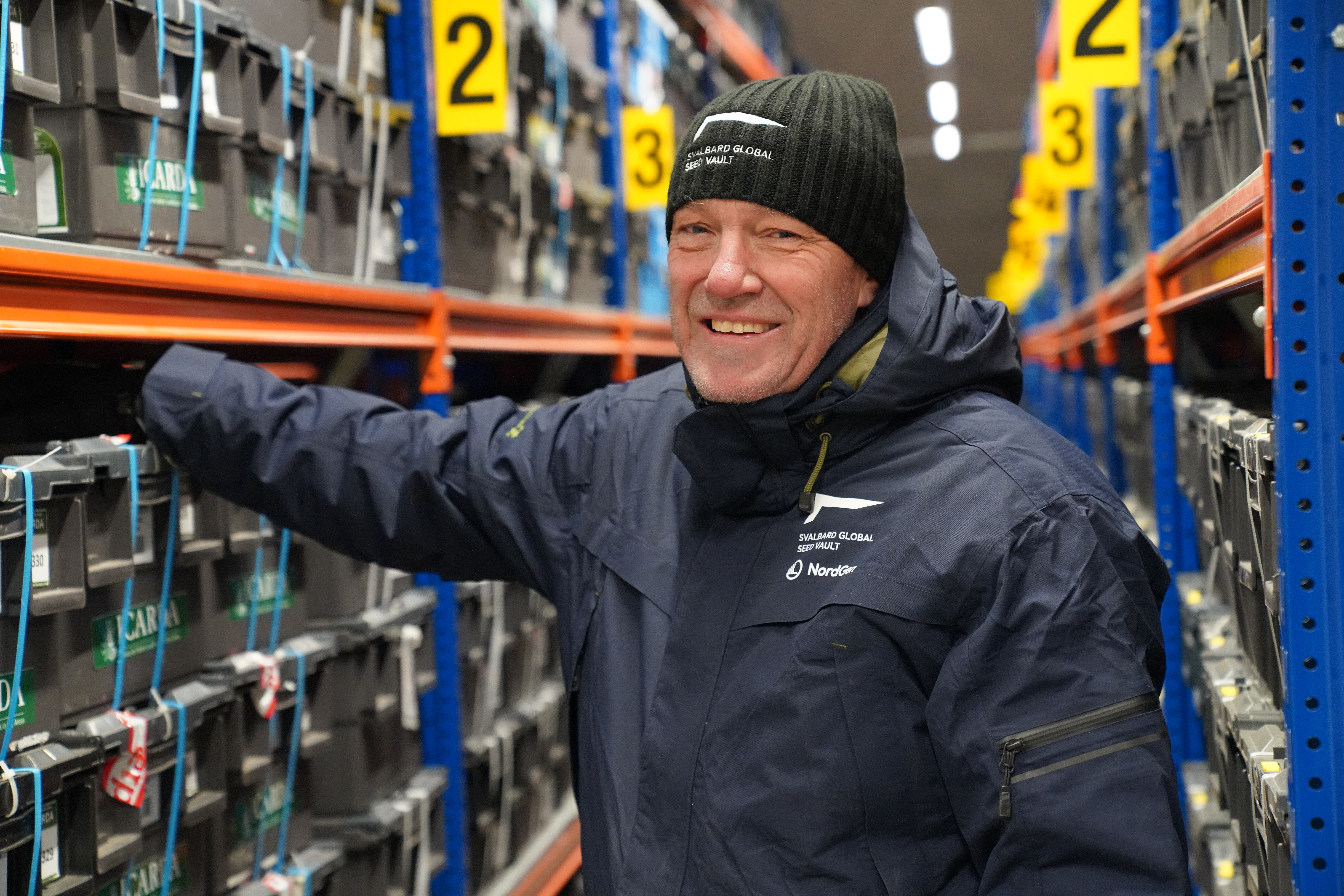 Coronavirus SARD-CoV-2 (COVID-19) continues to significantly impact so many of us around the world. With countries on government-ordered lockdowns, and people practicing social distancing, many genebank staff are scrambling to do what can be done to keep their collections alive.

Genebanks all around the world are critically important for our food systems now and in the future, and the Svalbard Global Seed Vault was established in 2008 to serve as a back-up facility for genebanks to safeguard their duplicate seeds.

This past February, the Vault received deposits from a record number of genebanks, the most to ever deposit seeds at one time. These included seeds from CGIAR genebanks and the Cherokee Nation. We spoke with Åsmund Asdal of NordGen, who oversees deposits to the Vault, about what this process looks like and his role as Seed Vault Coordinator.

How long have you been involved with the Svalbard Global Seed Vault?

I’ve been the Svalbard Global Seed Vault Coordinator at NordGen since 2015. However, to some extent I was involved earlier, as part of the Norwegian delegation to the FAO Commission for Genetic Resources for Food and Agriculture, where plans to establish the Seed Vault were launched. I was also involved in preparations for the grand opening of the Seed Vault in February 2008. NordGen itself has been involved since the beginning and is responsible for organizing seed deposits from genebanks and getting the seeds safely into the Seed Vault.

Can you describe a typical day when there are deposits to be made at the Seed Vault?

Normally, the seed boxes arrive some days in advance of the opening day, as we call it. They are securely stored in Longyearbyen – the nearest town to the Seed Vault. On opening day, the seed boxes are brought to Longyearbyen airport for security scanning – in the same way that passenger luggage is scanned. The airport staff kindly help ensure that there is nothing but seeds in the boxes.

At the airport we also check the seed boxes against the list of depositors from whom we’re expecting consignments.

“It’s always fascinating to see the different boxes and labels and know that often these seeds have traveled from so far away – sometimes from the other side of the world.”

We never open the boxes and have to take great care with them – the seeds inside remain the property of the depositors at all times, plus they represent thousands of years of agricultural history. Once the seed boxes clear airport security, we load them into a vehicle, and drive the 3km-or-so to the Seed Vault. In winter, this drive is completely dark at almost any time of the day, and the landscape covered in snow. Occasionally I’ve been lucky enough to see the aurora borealis, or Northern Lights. During summer you get to witness more of the stunning landscapes around Longyearbyen, which experiences the “midnight sun” from the end of April until the end of August.

When we arrive at the Seed Vault we are met by representatives from Statsbygg, an agency of the Government of Norway. They are keyholders for the Seed Vault, on behalf of the government, and responsible for the security of the Seed Vault. We load the boxes onto trolleys and take them 120m into the mountain, accompanied all the way by Statsbygg. At the end of the tunnel, before we take the boxes into the seed room, we label them with unique identification numbers.

“It’s peacefully quiet down there, and while it’s minus 18 degrees Celsius, all the heavy lifting tends to keep you warm – for a little while at least! The camaraderie is great and we all feel as though we are doing something important for humanity.”

After putting the seed boxes on the shelves, we take photos of them. When we’re back in the office, we send these to each depositor, confirming that their boxes are safely inside the Seed Vault. There are between four and six seed deposit occasions a year, usually involving a total of 15–25 depositing institutes.

Has there been a particularly special moment for you in your work with the Svalbard Global Seed Vault?

Every deposit is a special occasion for me! But there are a few moments that really stand out. In addition to the opening of the Seed Vault in 2008, the celebration of the Seed Vault’s tenth anniversary in February 2018 was very special. In particular, it was great to see all the happy faces and representatives from genebanks, many of whom had traveled almost halfway around the globe to be there.

“A choir of Svalbard coal miners sang at the entrance to mark the occasion, and representatives of the genebanks were invited to carry their boxes through the front door of the Seed Vault.”

That day we received seeds from 23 depositors – the largest number at any one time. It was great to see that a decade since it opened, there was continued, strong support for the Seed Vault, and that it was doing what the international community intended it to do.

Another special moment was when the International Center for Agricultural Research in the Dry Areas (ICARDA) made its first withdrawal of seeds from the Seed Vault. This happened in 2015, after ICARDA’s genebank in Syria was unable to operate properly due to the civil conflict. Up until then, we’d only taken seeds into the Seed Vault, never out. Wheeling those trolleys of seed boxes out of the Seed Vault was a strange experience, but it proved that the Seed Vault could fulfill one of its most essential functions – to serve as a backup for the world’s genebanks in case they ever experience any problems.

If ICARDA hadn’t backed up its seeds in Svalbard, they might have been lost forever. Over time ICARDA has been restocking the Seed Vault with the seeds it withdrew, as it builds up the capacity of its new genebank operations in Morocco, and Lebanon.

“The polar bears provide an unusual element of security!”

Svalbard is known for its polar bears. Have you ever seen any?

Yes! But not near the Seed Vault, fortunately. Sometimes we’ve seen polar bear paw prints near the Seed Vault, probably because they had sensed human activity in the area and came to investigate. While I’d prefer not to meet one face-to-face, I’ve seen them from afar and they are beautiful, majestic animals. The Seed Vault is one of the most secure places on Earth, so I guess the polar bears provide an unusual additional element of security!