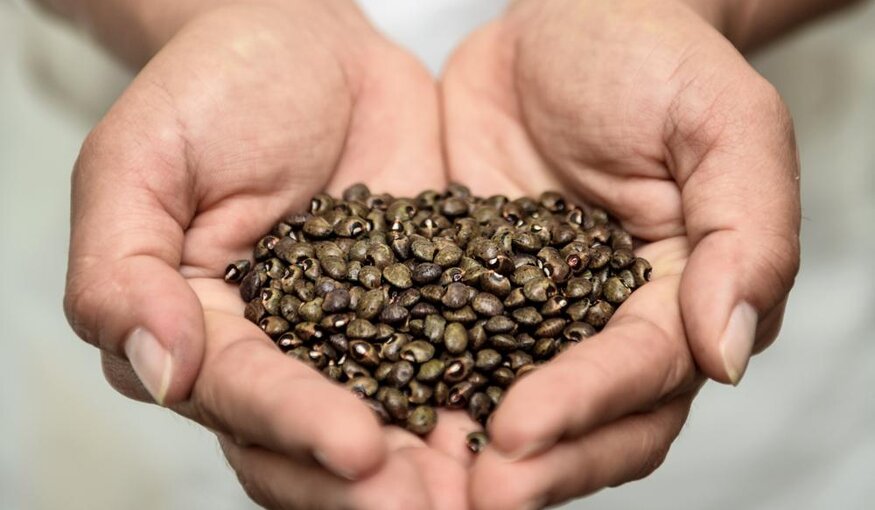 The Bermuda bean has evolved a root system that makes it more resistant to tropical storms. Photo: Neil Palmer/CIAT

Daniel Debouck doesn’t believe in ghosts, but he says he saw one once... or rather a ghost species.

Debouck, the former head of the genebank at the Alliance of Bioversity International and the International Center for Tropical Agriculture (CIAT) in Colombia, first noticed the mysterious species in the Flora of Bermuda, published in 1918.

As one of the world’s leading authorities on bean diversity, Debouck was intrigued by a drawing of a bean species that he had never seen before and wondered if the plant still existed. His search for the Bermuda bean led to the confirmation that it was a real species after all, and to the discovery of some amazing, unique traits.

The Bermuda bean (Phaseolus lignosus) is endemic to the island that gives it its name and is on the verge of extinction in its homeland. But Debouck discovered that over millennia the Bermuda bean has evolved a root system that makes it more resistant to tropical storms. As climate changes and extreme events become more frequent, the ghost that Debouck has uncovered could play a part in greater food security.

An Illustration in a Book Leads to Thousands of Seeds

The Bermuda bean could have been lost forever if it had not been for the foresight of collectors from the Millennium Seed Bank of the Royal Botanic Gardens, Kew, who first collected seeds from the plant in 2008, and the subsequent efforts of Debouck and his team at the Alliance to multiply and conserve seeds for the future in genebank in Colombia.

Very few wild or cultivated bean species have escaped the notice of Debouck, a Belgian researcher who has collected Phaseolus species from northern Mexico to Argentina. Debouck has collected 3,900 botanical specimens during 38 expeditions in 14 countries of Latin America and has discovered 14 new species. Debouck managed the genebank at the Alliance in Colombia from 1996 until December 2016, when he started a transition toward retirement. In 2017, he received the Order of Leopold, the highest recognition that the Kingdom of Belgium bestows, for his 40 years of scientific work.

“The Bermuda bean interested me for many years because it was a sort of ‘ghost’ species,” Debouck said. “As far as I knew it only existed as a drawing in Britton’s 1918 edition of Flora of Bermuda. To me, botany should be based on living plants, not drawings nor incomplete descriptions, which just lead to more confusion. Botany needs a classification system, that is, taxonomy. The current classification system bases the identity of each species on a single dried plant specimen, called the type specimen. For a period of time, however, an illustration was accepted as a type specimen, and this was the situation of the Bermuda bean. I was not willing to validate the existence of the Bermuda bean without a living specimen. That would be a job half done.”

So Debouck looked for the Bermuda bean beyond the pages of the old flora and that search took him to several of the world’s herbaria, which are repositories of dried plant collections.

“The bean could well have been lost in that book,” Debouck said. “But in 2011, I visited the Kew Herbarium.” As he was reviewing herbarium sheets, he found a specimen of the Bermuda bean. “It was one chance in a million, but there was a tiny note on that herbarium sheet stating that seed of the species existed in the Millennium Seed Bank collection.” Kew botanists had not only made two herbarium specimens of the bean, but they also collected seeds and had conserved them in the Millennium Seed Bank (MSB).

Debouck contacted the MSB staff at Kew’s sister garden in Wakehurst Place in Sussex and they sent him a few seeds in 2012.

“With my collaborator, Orlando Toro, we planted four seeds,” Debouck said. “We obtained four plants from those seeds: three with magenta flowers and one with white flowers. Thanks to the kindness of our colleagues at Kew and Wakehurst, I was able to put the Bermuda bean in its place in the bean family.”

But Debouck wasn’t interested in merely validating the taxonomy of the Bermuda bean. He wanted to ensure its survival and study its morphology. After months of growing both colored forms at the Alliance’s Popayan station, Debouck and his team obtained thousands of seeds. There are now seeds available for additional studies and for conservation in the MSB, the Svalbard Global Seed Vault and the Alliance genebank.

Once the Bermuda bean emerged from the pages of the old flora and from herbarium specimens and he had multiplied sufficient seed, Debouck was able to study the traits of the living plant.

At the Popayan station, Debouck observed that the bean has evolved a root system which makes propagation easy. “I noted that the lower stems had the capacity to root themselves,” Debouck said. “So it was easy to take cuttings from the mother plant. We took those cuttings and tried growing them at different stations, in different soils and in full or partial light until we got vigorous plants with profuse flowering and pod set.”

Debouck’s observations of the Bermuda bean showed that it could very well have evolved to withstand the tropical storms often encountered in Bermuda.

“The root system is that of a colony,” Debouck said. “The lower internodes of its stems have a special capacity to produce adventitious roots. If the mother plant dies off, younger plants at the periphery will survive. That could be an adaptation to places exposed to strong winds. Given the topography of Bermuda, where the highest elevation is a mere 70 meters, and its location in the Atlantic Ocean, this adaptation is not surprising.”

The Bermuda bean has now been saved for posterity, but only in the nick of time. It is possible that soon there will no longer be any living plants in the wild. Surveys suggest that only 29 plants remain in the wild on the island. It is listed as “critically endangered” under Bermuda’s Protected Species Act.

“The Bermuda bean is for me a vivid example of the purpose of a genebank,” Debouck said. “Genebanks work to save crops and their wild relatives and thus conserve traits that can be bred into our common crops, and in so doing they ensure our future food security. If Bermuda loses its bean, Bermuda is poorer and all humanity is poorer too!”

Like many wild plants, the Bermuda bean in its present form may never make it to our dinner tables. “Not all of the 120,000 accessions of rice at the International Rice Research Institute genebank are that good to eat, or the 6,800 accessions of potatoes at the International Potato Center, or the 28,000 accessions of maize at the International Maize and Wheat Improvement Center, or the 38,000 bean accessions at the Alliance,” Debouck said. “You can’t eat crop wild relatives, but they have traits that when crossed with our domesticated varieties will make the crop more resistant to drought or floods or salinity or pests and diseases. In the case of the Bermuda bean, we could possibly cross it with domesticated beans and transfer its special root traits and develop a new crop that can resist strong winds and other stresses.”

The crop diversity safeguarded in genebanks can help breeders if they want bigger or smaller plants or grain, or a different seed color, or better yield or even better taste. “Crop diversity gives us these options and it comes straight from nature,” Debouck said. “But to access these traits, we need to conserve and make available the crop wild relatives. And that is the role and thus the importance of genebanks.”

Genebanks around the world are working to conserve this crop diversity. The Alliance genebank is one of 11 global genebanks managed by CGIAR centers. The Genebank Platform, a partnership between the Crop Trust and CGIAR, which came to an end at the end of 2021, ensured that the genebanks meet international standards, improve efficiency and facilitate more effective use of the collections.

Much of genebank work, like that conducted by Debouck, is funded via the Crop Trust’s self-sustaining endowment. Each year, a portion of the fund’s value is paid out to ensure that the crop diversity held in genebanks is conserved and maintained.

Debouck’s collaboration with Kew illustrates the value of international partnerships. “Daniel Debouck is a long-standing Kew collaborator who has named many of our Phaseolus specimens over several years and has always generously deposited duplicate collections of his new species in the Kew Herbarium,” said Gwilym Lewis, legume research leader at the Royal Botanic Gardens, who assisted Debouck in his literature search and review of the Kew Herbarium legume collections. “He has played a pivotal role in conserving this rare Bermuda bean.”

A Ghost Species No Longer

To date, the Bermuda bean hasn’t been used in any breeding programs. “Using the traits of the Bermuda bean will come later; for now, the priority is to conserve the species in genebanks and avoid its extinction,” Debouck said. “As the world around us changes, we will never know what plant traits will be valuable in the future. Our goal is to ensure we have the options when and if we need them.”

The ghost that Daniel Debouck thought he once saw is no longer an apparition. The Bermuda bean is alive and well in three major genebanks and one day could add its wind-resilient traits to a common bean on our dinner table.

Categories: For Partners, For Students