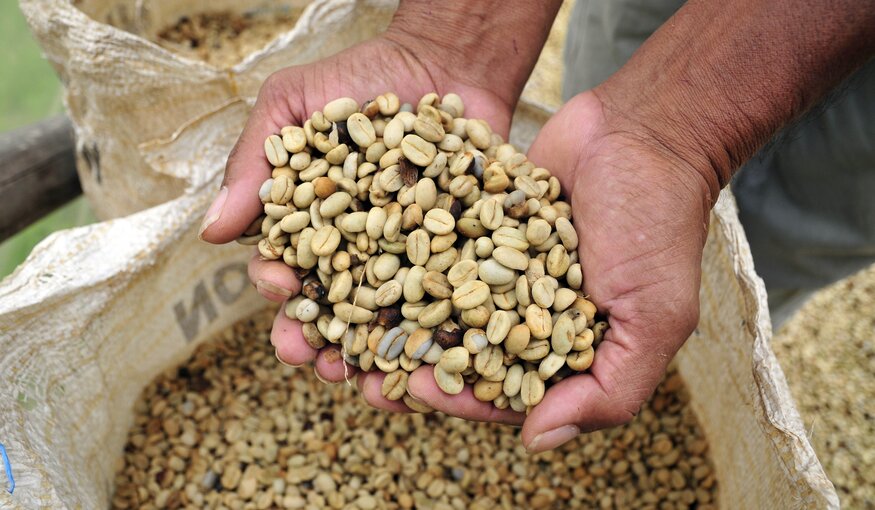 There’s an outfit called Conservation Optimism. Its mission is as its name suggests: inspiring biodiversity conservation through good news. I really admire their moxie, because optimism is a really hard sell. When we’re not lapping up supposedly fake news, it seems it’s mainly bad news we crave along with our morning coffee.

Even if it’s bad news about our morning coffee.

See, that got your attention.

Yes, there’s bad news for coffee. Scientists from the UK and from Ethiopia – where coffee cultivation originated – recently showed that the global coffee industry, supporting 100 million farmers all over the tropics, and providing the basic fuel for untold millions more people all over the world, rests on dangerously precarious foundations. Unsurprisingly, the results were all over the media before breakfast.

It comes down to this: The coffee crop around the world is represented by just a few dozen different varieties of two species, arabica and robusta. They go by such evocative names as Blue Mountain, Geisha and Ruiru 11, but many of these varieties are fairly old, and susceptible to pests, diseases and climate change. So plant breeders are constantly trying to come up with better ones for farmers to try out – better tasting, higher yielding, more resistant to stresses.

That can take a long time and a lot of effort, but it would be impossible without a precious raw material: the genetic diversity within the 125 different species of coffee. Yes, there are 123 other species of coffee out there, apart from the two that we cultivate. And even in those two, there is more – much more – diversity in the forests of Africa and Madagascar than in farmers’ fields.

But for how long? The bad news that had people spluttering over their breakfasts was that 60% of those wild species are threatened in their natural habitats, mainly by climate change and deforestation. Wild arabica coffee itself is now considered endangered. If this enormous reservoir of diversity is lost, how will researchers be able to keep our morning coffee flowing?

They won’t, it’s that simple. Certainly not at today’s prices. No wonder headlines were grabbed.

But here, maybe, we could do with a shot of conservation optimism. The fact is, we can do something about this. There are sensible, concrete things that we can – and should – do about deforestation and climate change, and not just because it would help save coffee species in nature. But there is also another line of defence against the loss of coffee diversity.

That line of defence is genebanks – places which safeguard crop diversity away from the threats it faces in nature, and make it available to researchers, breeders and farmers. There are internationally important coffee genebanks in research institutes in three African countries (Cote d’Ivoire, Ethiopia, and Madagascar) and in Costa Rica. They have been maintaining coffee diversity – about 20,000 different samples – for decades now, but all too often on a shoestring budget. Any one of those 20,000 could hold the key to solving a current production problem, or one that will arise in 10 or 50 years’ time. Together with the genebanks and World Coffee Research, an industry-funded scientific body, we at the Crop Trust have put together a strategy that would ensure their survival.

The good news is we think it only requires a one-time injection of US $25 million into the Crop Trust endowment fund to put these genebanks on a sustainable footing. It would generate the US $1 million per year needed conserve these priceless collections forever. If US $25 million sounds like a lot, it equates to just 0.15% of worldwide exports of the crop. I’m optimistic industry will wake up and smell the coffee.