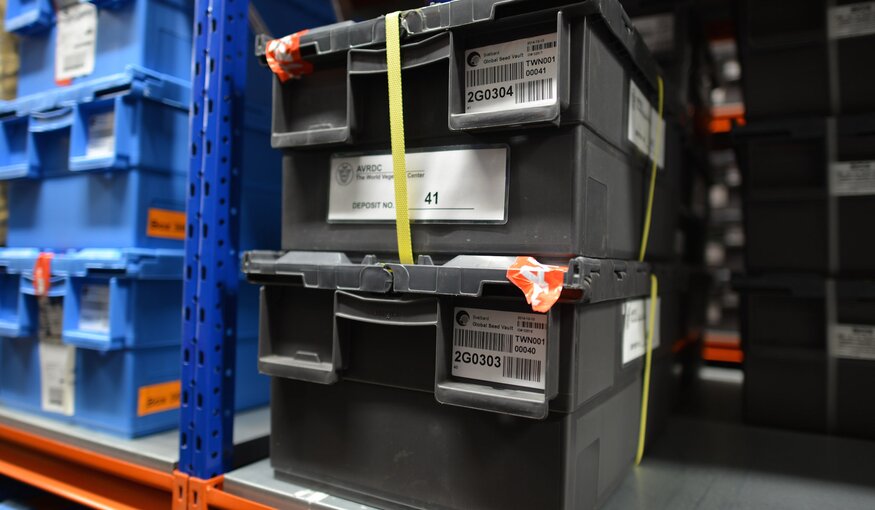 Almost 10,000 crop varieties from more than 100 countries will be deposited in the world’s biggest seed bank this week – a major contribution to the fight for global food security in the face of the growing threat of climate change.

Coinciding with World Food Day on 16 October, the Svalbard Global Seed Vault, located on a remote island in the Svalbard archipelago off the northern coast of Norway, is accepting a series of deposits this month.

This month’s four shipments come from major genebanks based in Bulgaria, Colombia, India, and Taiwan. Genebanks are facilities in which seeds are preserved under special conditions designed to keep them alive for decades. The deposits will include varieties of wheat, barley, maize, cowpeas, sorghum, pearl millet, chickpea, pigeon pea, groundnut, Asian and African eggplant, and a number of indigenous African vegetables, including okra, amaranth, spider plant, and jute mallow. They will join more than 825,000 samples from around the world already stored at Svalbard - encapsulating 13,000 years of agricultural history.

Crop diversity is essential for crop improvement and agricultural resilience, and is therefore vital in the battle against hunger, especially in a fast-changing climate. The deposit from Bulgaria, for example, contains local varieties of wheat, barley and maize that are tolerant to pests and diseases, and peas that are tolerant to drought – making them particularly suitable for dry climates

A recent study co-authored by the Global Crop Diversity Trust found that the world food supply has grown increasingly dependent on few crops over the past 50 years. Climate change will affect the ability of these crops to thrive, and pressure will increase on the global food system, whilst the global population continues to grow.

The Global Crop Diversity Trust, the only international organisation devoted solely to ensuring the conservation and availability of crop diversity worldwide, funds the operations of the Svalbard Global Seed Vault.

“The Svalbard Global Seed Vault symbolises how we can create a long-term, sustainable and positive solution to feed the world forever.

“The issue of hunger is global, and increasingly urgent. If we continue as we are, food production will be reduced and food prices will rise. Even more people will go hungry. Crop diversity is essential if we are to provide more food, more nutritious food and affordable food for the poor. Maintaining crop diversity, and the genetic wealth it provides to current and future generations, is beneficial not just to crop breeders, but to the farmers that feed all of us on the planet.

“I call upon national governments, scientists and all who care about the food security to join us in highlighting this vital issue, and for genebanks around the world to send their seeds to Svalbard to safe keeping.”

“NordGen welcomes the new safety deposits from our partners in India, Colombia, and Taiwan. We are particularly pleased to have received the first seeds from a new depositor, the Institute of Plant Genetic Resources, in Bulgaria.

“Every time a new depositor joins the Seed Vault partnership, or we receive new deposits from our existing partners, we’re moving one step closer to our goal of safety duplicating all unique crop seed diversity in the world.”

“ICRISAT has been depositing seed samples regularly over the years in Svalbard, and with this latest shipment the total samples for safety back-up we have sent will now stand at 108,352. This is a remarkable contribution to the future of our crops.

“The Global Crop Diversity Trust is performing a hugely important role, in saving the diversity of important food crops from extinction as well as supporting several genetic resource activities globally – whether it be collection, evaluation, regeneration, documentation, distribution and conservation. Without their active role, coupled with the support of donors and national governments, our future food security would be under even greater threat.”

“We have made five deposits since 2008, and Svalbard is a truly vital global instrument to safeguard the world’s valuable plant genetic resources, for the benefit of future generations and the survival of humankind. This deposit safeguards unique vegetable genetic resources in the global system.

“The Global Crop Diversity Trust’s work merits the full support of donors and national governments as it allows us to put in place a rational and cost-effective system for the conservation of plant genetic resources for food and agriculture, forever.”

Further seed deposits at Svalbard will take place in November 2014, and in February 2015.

This month’s depositors to the Svalbard Global Seed Vault are the: