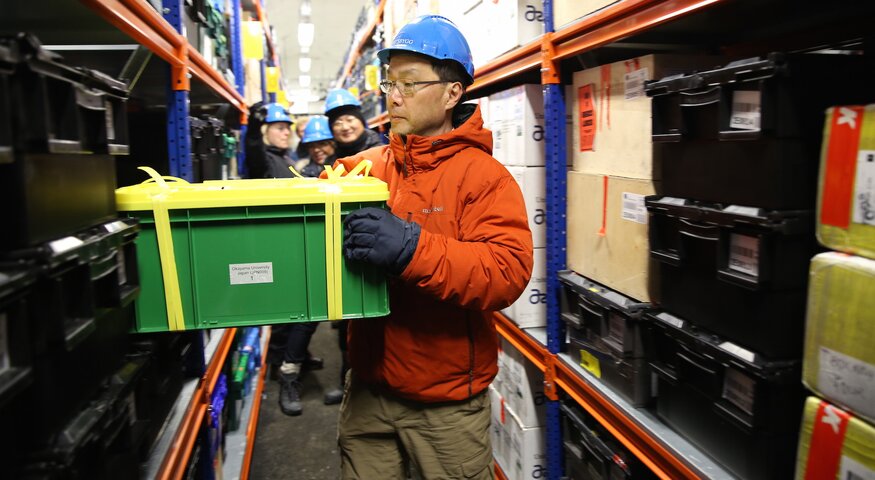 Longyearbyen, Norway (26 February 2014)—Over 20,000 crops originating from over 100 countries will arrive this week at the Svalbard Global Seed Vault (SGSV), in time for the vault’s sixth birthday. The samples include a university collection of barley from earthquake-rattled Japan, crucial to everything from beer and whiskey to miso soup and summertime tea; an untamed assortment of wild relatives of rice, maize and wheat; exotic red okra from Tennessee via the Cherokee; and, from Brazil, a humble bean that launched a national cuisine.

The addition of this cornucopia of crops to the “Doomsday Seed Vault”—so called because it is protecting agricultural systems worldwide from disasters natural or manmade—means there are now 820,619 samples or “accessions” of food crops and their wild relatives stored deep in an Arctic mountain on Norway’s remote Svalbard archipelago. Their arrival coincides with the 10th anniversary of the Global Crop Diversity Trust, which maintains the seed vault in partnership with the Norwegian government and the Nordic Genetic Resources Center.

“Our annual gatherings at the seed vault are a sort of winter Olympics of crop diversity, only we are not competing against each other but against the wide array of threats, natural and manmade, ranged against the diversity of food crops, diversity that is so crucial to the future of human civilization,” said Marie Haga, the Crop Trust’s executive director. “We are particularly excited to be welcoming our first seed deposits from Japan, which has been very active globally in the preservation of a wide array of crop species.”

The seed vault is a backup, housing duplicates of the living crop diversity collections kept in “genebanks” around the world and widely and regularly shared with plant breeders.

Among the contributors to the seed vault on its sixth birthday are the Barley Germplasm Center of Okayama University in Japan; the CGIAR’s International Maize and Wheat Improvement Center (known by its Spanish-language acronym CIMMYT) the International Potato Center (known by its Spanish acronym CIP); the Australian Grains Genebank and Australian Tropical Crops Collection; the South Australian Research and Development Institute (SARDI); the Brazilian Agricultural Research Corporation (known as Embrapa); and the Seed Savers Exchange of the United States.

The Barley Germplasm Center of Okayama University delivered duplicates of 575 samples or “accessions” of barley and ultimately plans to send some 5,000 for safe-keeping in the vault. Professor Kazuhiro Sato of the university’s Institute of Plant Science and Resources said barley experts in Japan became more concerned about the safety of the Japanese collection after the power failures that followed the 2011 earthquake and tsunami, as seeds must be kept carefully chilled in order to survive.

“If something bad happened to our genebank, these resources could be damaged permanently,” Professor Sato said. “Barley is very important not just for Japan but for the food security of the world—we have varieties that are productive even in dry conditions and in saline soils—so we need to do everything we can to ensure they always will be available to future generations.”

Barley is found throughout traditional Japanese cuisine or “washoku,” which recently became the second culinary tradition, after French cooking, to be designated a “cultural heritage” by the United Nations Educational, Scientific and Cultural Organization (UNESCO). In Japan, barley is fermented to make a type of traditional miso soup and is often served in rice dishes. In addition, roasted barley is used to make a cold tea called mugichathat is a popular beverage in the summer months.

Japanese distillers use barley to make a type of whiskey similar to Scotch and to make an increasingly popular beverage called Shōchū. It also is of course used to make beer. Several years ago, a scientist at Okayama University collaborated with Russian scientists to cultivate barley from grain originally grown on the International Space Station. It was then used by Japanese brewer Sapporo to make “Space Barley” beer. Meanwhile, barley is beginning to get more attention in places like the US due to its potential to lower cholesterol.

The barley seeds sent to Svalbard this week also include varieties from China, Korea and Nepal, even a variety that is roasted and mixed with yak butter to make Tibetan Tsamba. East Asia is a secondary center of genetic diversity for barley, and the wide-range of valuable traits—such as disease resistance, high quality and high yields—play a critical role for the region’s food security.

Taking a Walk on the Wild Side—Of Rice, Sorghum, Maize and Potatoes

The seed shipments arriving at Svalbard also illustrate important progress in the global effort to collect and protect the wild relatives of domesticated crops, many of which could be important sources of traits such as heat and drought tolerance and disease and pest resistance. These traits will be needed to help farmers adapt to stresses that are being intensified by climate change.

CIP delivered 195 samples of wild potato and 61 of wild sweet potato. While not edible, wild potatoes are nonetheless viewed as offering traits that can be used to create more nutritious, disease-resistant varieties of domestic potatoes. CIP has increased efforts to collect, duplicate and store wild potatoes in the wake of studies warning that by 2050 as many as 13 wild potato species could become extinct.

Securing More of the “Crown Jewels” of Agriculture

The large deposits being made from CIP and CIMMYT, both part of the CGIAR Consortium’s global agricultural research partnership, are indicative of the deepening partnership between the CGIAR and the Global Crop Diversity Trust. Crop genebanks maintained by CGIAR centers house 700,000 publicly accessible samples of wheat, maize, rice, potato, banana, sorghum, forages, beans, and many other plants.

“CIMMYT alone already has sent a total of 123,057 maize and wheat accessions and we are well on our way to having 100 percent of our collection duplicated in the seed vault by 2021,” said Denise Costich, head of CIMMYT’s Maize Germplasm Bank.

While CIMMYT’s maize and wheat samples are maintained in its Wellhausen-Anderson Plant Genetic Resources Center in Mexico, they include varieties cultivated around the world and regularly shared with its 700 partner organizations. Overall, in the last 10 years, the 11 CGIAR centers have distributed more than one million samples of crop, forage and agroforestry resources to plant breeders and other researchers to develop new and more resilient varieties.

The CGIAR Consortium, with funding from the CGIAR Fund, recently entered into a US$109 million partnership with the Crop Trust to ensure the quality and availability of the international crop collections, which former Crop Trust executive director Cary Fowler has called the “crown jewels of international agriculture.” Their importance is recognized by the International Treaty on Plant Genetic Resources for Food and Agriculture by having a whole article all to themselves.

Every Seed Tells a Story

The sixth anniversary celebrations at the seed vault include several new contributions from the US-based Seed Savers Exchange, which is dedicated to saving and sharing heirloom seeds, each with its own back story.

For example, the exchange has sent a variety of red okra that was given to it by a woman from Tennessee via her father-in-law, who said the seed was passed down through generations of Cherokee. The Seed Savers shipment also included “Rox Orange” sorghum, a variety that was developed in the first half of the 20th century specifically for making syrup. And it contributed a variety of cherry tomato called “Unger’s Hungarian” because the person after whom it is named brought it to the US when he emigrated from Hungary.

Finally, from Brazil’s Embrapa come 514 samples of what is simply known as “the common bean” but which plays an uncommonly prominent role in Brazilian cooking and culture. In much of Brazil, feijão preto, or black beans, are eaten with virtually every meal and are the crucial ingredient in Feijoada, a stew of beans and pork many consider to be Brazil’s national dish.

“Each and every single deposit into the vault provides an option for the future,” said Haga. “At a time of unprecedented demands on our natural environment, it is critical to conserve plant genetic resources for food and agriculture. This will guarantee farmers and plant breeders continued access to the raw materials they need to improve and adapt crops. Conserving crop diversity guarantees that the foundation of our agriculture is secure for the future. Drawing on a global coalition of governments and private donors, the Crop Trust is building an Endowment Fund, which will safeguard the diversity of the major food crops of the world in genebanks when complete.”