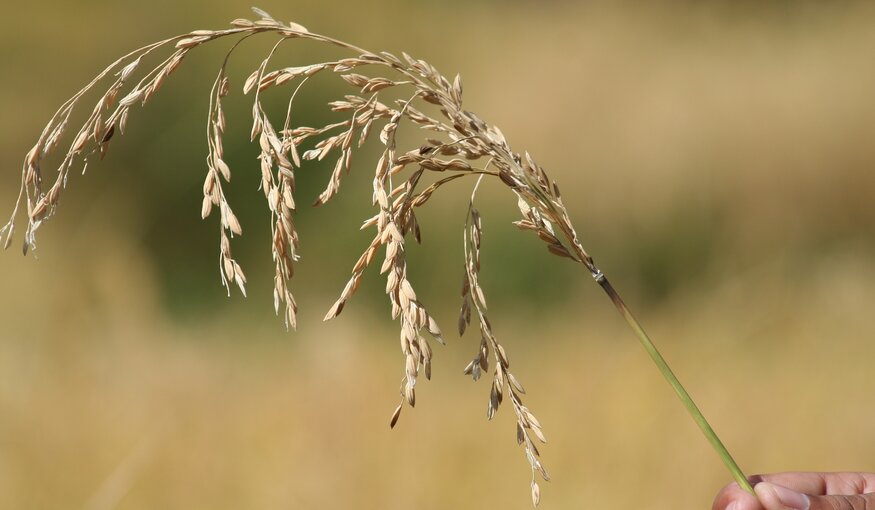 Today, about three billion people depend on rice for their survival, with the thousands of varieties carefully stored at IRRI providing the last line of defense between them and possible famine–especially in times of war, natural disasters, and attacks from pests and diseases.

The agreement offers, for the first time in the history of modern agricultural research, stable and long-term support to an unrivalled collection of genetic diversity of a food crop. IRRI’s Genetic Resources Center in the Philippines houses more than 100,000 samples of rice, representing the largest and most important such collection in the world. The collection is kept in a special earthquake and fire-proof facility that must be maintained at temperatures as low as -19 degrees Celsius.

“With almost half the world’s population depending on rice, we wanted to make sure IRRI’s genebank was insulated from the whims of fluctuating funding,” said Dr. Cary Fowler, the Crop Trust’s Executive Secretary. “The agreement goes to the core of the Trust’s mission, which is to guarantee the conservation of the world’s crop diversity, and it’s hard to imagine a more important crop for sustaining humanity than rice.”

Under the agreement, IRRI has pledged to invest USD 400,000 annually on the gene bank, which will unlock USD 200,000 from the Crop Trust each year. The agreement allows for inflationary increases and will remain in force “indefinitely.” The money will go toward, among other things, acquiring any rice varieties not currently in the repository and making sure the storage systems for long-term conservation are up to international standards.

This agreement—the first major conservation grant made by the Crop Trust—is structured to reflect the long-term vision of both organizations. “Short-term thinking about funding has wreaked havoc on effective conservation,” said Fowler. “This agreement is probably unique among funding contracts in having no end date. I am pleased that our first long-term grant protects the crop which feeds the most people, for the longest term imaginable-forever.”

At a special ceremony today, IRRI also dedicated the Genetic Resources Center (GRC) to Dr. Te- Tzu Chang, the founder of the International Rice Germplasm Center—one of the predecessors of the GRC. Dr. Chang, who passed away last year in Taiwan, China, was a world authority on rice genetics and conservation and spent 30 years at IRRI collecting and storing rice varieties from all over Asia and the world. From now on, it will be known as the T.T. Chang Genetic Resources Center.

“The rice genebank is not just a scientific exercise in seed genetics but a major hedge against disaster that ensures farmers throughout the world will always have the rice varieties they need to maintain food security,” said Dr. Robert S. Zeigler, IRRI’s Director General.

For example, after the Asian Tsunami, IRRI was able to reach into its collection and provide farmers in areas which had been under seawater with varieties of rice capable of growing in salty soils. In addition, several countries, including Cambodia, East Timor, India, Nepal, and the Philippines, have turned to the IRRI genebank to restore native varieties of rice that, for a variety of reasons, had disappeared from domestic production.

Last year, IRRI introduced a new variety of rice able to withstand being completely submerged in a flood. And it is playing a central role in an initiative of its umbrella organization, the Consultative Group on International Agricultural Research (CGIAR), to develop crops that will allow farmers to deal with the potentially devastating effects of climate change.

According to Zeigler, this grant breaks new ground in the funding of arguably the most important resource in the world: “Rice diversity, like all crop diversity, is at risk for the want of relatively small amounts of money. Given that we are talking about is the biological base of the global food supply, it is extraordinary that the current situation is so precarious. The economics speak for themselves.”

An independent study estimated that adding an additional 1,000 rice samples to IRRI's genebank would generate an annual stream of benefits to poor farmers of USD 325 million. “Amazingly, these annual benefits would exceed the one-off cost of endowing the diversity of all of the most important crops,” said Fowler.

The work by the Crop Trust to safeguard the future of rice cultivation is in fact one element of its broader work to secure the full genetic diversity of all the world’s important food crops. In addition, as part of a safe global system, the Trust is also supporting the “fail-safe” seed vault in the Arctic—the Svalbard Global Seed Vault—that will eventually contain every known crop variety.

Dr. Zeigler emphasized the challenge of funding such work by saying it took IRRI decades to build up the cash reserves necessary to match the funds from the Trust. “The Institute is doing this using its own resources; there are no other donors involved apart from the Trust,” he explained. “It’s also vital that people understand that the problem does not end here. This funding is incredibly important, but more is still needed.” For example, funding is still needed to determine exactly how many distinct rice varieties there are.