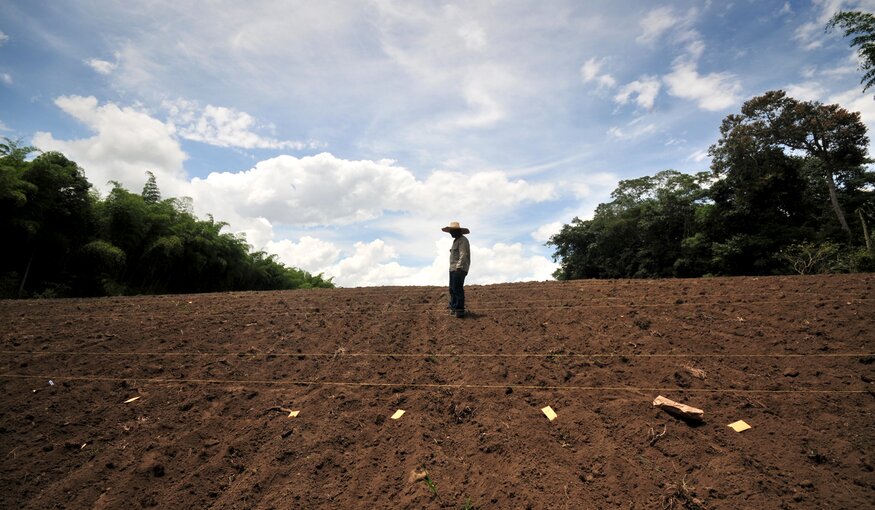 The Royal Botanic Gardens, Kew (RBG, Kew) and the Global Crop Diversity Trust (Crop Trust) will be jointly organising a one-day symposium on November 23 bringing together experts from around the UK to discuss the role of crop diversity and Crop Wild Relatives (CWR), in building more sustainable and resilient agriculture and food security. The objective of this symposium is to inform research scientists and decision makers about the critical importance of CWR in climate change adaptation, and the ongoing UK work in this field.

This vital meeting of minds comes in the lead-up to the 21st session of the Conference of the Parties to the United Nations Framework Convention on Climate Change (COP21), which takes place in Paris in December 2015. There will be discussions around a legally binding global agreement to combat climate change through both adaptation and mitigation, and promote the transition towards more resilient, low-carbon societies and economies. Agriculture and food security are major issues in this regard, but have thus far been generally left off of the COP21 agenda. Breeding better-adapted and more efficient crops is key to achieving these objectives.

By 2020 maintain genetic diversity of seeds, cultivated plants, farmed and domesticated animals and their related wild species, including through soundly managed and diversified seed and plant banks at national, regional and international levels, and ensure access to and fair and equitable sharing of benefits arising from the utilization of genetic resources and associated traditional knowledge as internationally agreed.

The Crop Trust and the Millennium Seed Bank of RBG, Kew jointly manage the Adapting Agriculture to Climate Change: Collecting, Protecting and Preparing Crop Wild Relatives project to collect many of the most important crop wild relative species, ensure their long-term conservation, and facilitate their use in breeding new, improved crops. This is a ten-year project, supported by the Government of Norway.

Our best allies in the fight against climate change are organisms that can withstand climate change. By identifying, collecting and conserving those species which can adapt to changing conditions, we can mitigate against the potentially catastrophic effects of food scarcity related to climate change. To do this, we need to continuously maintain and update the vast, interconnected gene pool of our key food crops.

The UK is one of the leading centres for this work. We have many different collections across the country, ranging from peas to fruits, to the wild relatives of cultivated food crops. These living collections are vital to ensuring resilience to possible future threats. Kew’s Millennium Seed Bank is at the heart of this effort, and the CWR programme, run jointly with the Crop Trust is a Kew’s flagship project.

The diversity of crop wild relatives represents a game changer for agriculture. This project is providing scientists, breeders and farmers around the world with access to crop wild relatives, which will have resistance to diseases and pests that the world has never seen before. If we are to adapt agriculture to climate change, we need to stack the odds heavily in the farmers’ favour. This project does just that.

Fifty years ago, during the 1970’s, rice yields across much of South East Asia suffered severe losses. The cause was Rice Grassy Stunt Virus, which was spread by brown planthoppers. The virus wreaked havoc on the rice cultivars grown by most farmers, leading to the destruction of more than 116,000 hectares of fields. Crop breeders tried in vain to screen resistant genes in more than 6,000 varieties of both cultivated and wild rice. Finally, this vital trait was discovered in a single wild relative of rice, Oryza nivara.

Crisis duly averted. Or merely postponed? Fast forward to today, and a planet of 7 billion people consumes 80% of its calories from just 12 plant species, with 50% coming from just three – wheat, maize and rice. These crops are now at risk from changes in climatic conditions and the diseases resulting from increased temperatures.

This is why RBG, Kew and the Crop Trust are helping partners to track down and conserve the wild relatives of our most prized crop plants. Although many crop wild relatives look like weeds, they are just what they sound like – rugged, hardy cousins to our more pampered domesticated crop plants. They are diverse, used to living in marginal conditions and fighting off disease, yet still hold vital adaptive genes, which have been bred out in modern agriculture. In the years to come, crop breeders will come to rely on reuniting these long lost family members.

The Project funds four primary activities: CWR prioritization, collection, conservation, and pre-breeding work to prepare CWR genetic material for use in breeding programs. The Project's activities are focused specifically on collecting and conserving the wild relatives of 29 focal crops, and launching pre-breeding projects for 20 of these crops.

Examples where wild relatives have already been used to enhance crops: