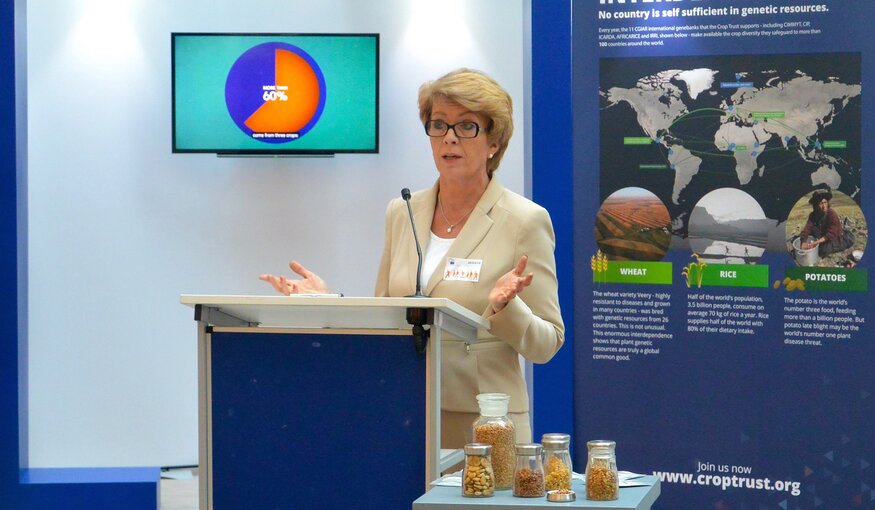 Marie Haga wrote an opinion article fot the web portal Europolitics on the necessity for the European Commission and the EU member states to support and contribute to the conservation of crop diversity.

The European Union has recognised the importance of its agricultural sector from the beginning. Since the signing of the Rome Treaty in 1957, with its Common Agricultural Policy, one of the EU’s primary functions has been to help Europe feed itself.

Yet its ability to do so is threatened. Only about 150 crops, and a small number of varieties of each of these, are grown on a large scale around the world. This is staggering when one considers that there are 7,000 crop species in existence, and 80,000 edible plant species, and great genetic diversity within each of these.

We tread a risky path by relying on this narrow genepool to feed ourselves, and a failure to protect and conserve crop diversity could be catastrophic. When we lose crop diversity we lose the raw materials needed to feed the planet.

This is a particularly pressing concern in an era of climate change, when there is a growing need to develop new strains of crops that can thrive in ever more inhospitable environments, and survive new pests and diseases. Genetic improvement is a process that is as old as sowing and harvesting– ever since the beginning of agriculture, farmers have identified useful traits in crops and selected them to give higher yields, be more nutritious and tasty, and cope better with their environment.

And there are more mouths to feed too – whilst European population levels are predicted to remain relatively stable, growth in the developing world means the global population will pass nine billion by 2050. Conservative estimates suggest an increase in global food demand over the same period of perhaps 50%.

With initiatives like 20-20-20 targets, the EU and other national and international bodies have done much to tackle climate change, but the issue of crop diversity has not yet been given the attention it warrants. The Global Crop Diversity Trust, as the only organisation dedicated solely to supporting the worldwide preservation of crop diversity forever, is working to change this, and visitors to the European Parliament during the first week of April will be invited to review an exhibition of photographs illustrating this important work and the direct connection between the conservation of crop diversity, the success of farmers and the thriving of consumers. We have been particularly grateful for the support of Pavel Poc MEP, vice-chair of the Committee on Environment, Public Health and Food Safety in the European Parliament, who is hosting the exhibition.

The Crop Trust provides funding and oversight to eleven international gene banks, among the most comprehensive and widely used collections of crop diversity in the world. Working with partners, we are also responsible for the Svalbard Global Seed Vault, a fail-safe, last-chance backup facility for the world’s crop diversity that is buried deep inside a mountainside on a remote Norwegian archipelago. It currently holds more than 850,000 samples of crop diversity from more than 60 institutions, and nearly every country in the world, including 94,651 accessions from European nations.

The survival of crop diversity is too important to be left to chance. A long-term, never-ending task requires long-term, sustainable financial support. That is why we are seeking to raise an endowment to ensure the permanent funding of key seedbanks around the world, where the genetic diversity necessary to develop the varieties that will feed future generations is preserved.

You may ask: what do collections of dried seeds in fridges, or of small plants in test-tubes in a lab, have to do the problems and aspirations of farmers? That's not a question that the Peruvian farmers in the Andean highlands near Cusco who recently received some of their lost potato varieties from the International Potato Center (known by its Spanish acronym of CIP) would think of asking. Or the small subsistence farmers all over the world who have benefited from the improved varieties coming out of the breeding programs of any of the CGIAR centers, varieties which would not have been possible without those centers’ gene banks.

In keeping with their long-term commitment to environmental and climate issues, a number of EU member states have already contributed to the Crop Trust’s work, the goals of which are very much in keeping with the European Commission’s own Biodiversity Strategy to 2020. Among EU member states, funding for the Crop Trust endowment has been secured from Germany, Ireland, the Slovak Republic, Spain, Sweden and the United Kingdom. It is time for the European Commission and the remaining EU member states to do their part, too.

We have USD170 million in the endowment and are working to increase that sum to USD500 million by the time of our international pledging conference in 2016. By contributing to this vital fund to protect the world’s agriculture forever, Europeans and our neighbours around the world can ensure that our sons and daughters, and the future generations that will follow them, have access to the genetic resources they will need to feed themselves.