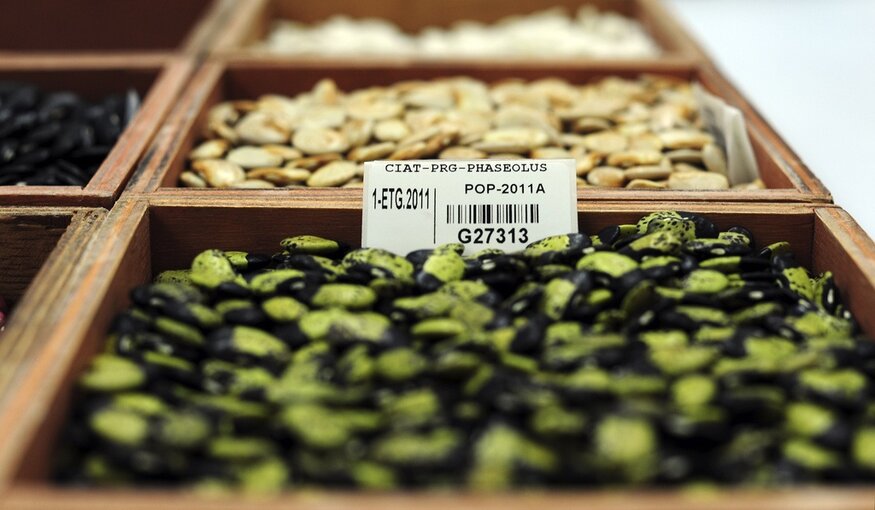 A recent article, published in the Smithsonian online magazine sheds light on the numerous challenges facing genebanks today and discusses everything from the origin of these precious seed repositories to what the perfect system of crop conservation would look like.

The article published on 17 June, features an interview with the Crop Trust’s Genebank Programs Coordinator, Charlotte Lusty, who explains why conserving crop diversity and funding genebanks is so important:

"Think of the human race: we didn't know anything about Ebola 20 years ago, and we had no idea we would need a vaccine for Ebola. It’s the same for a plant in a field. If you’re growing corn or wheat in a field, you have no idea what you’ll need or what disease will come, and that vaccine will come from a gene bank.”

Genebanks are meant to protect biodiversity, yet they themselves are in need of protection.

For almost a decade, researchers at the Svalbard Seed Bank in Norway have been collecting and storing samples of seeds from around the globe, meticulously preserving them in a vault carved 400 feet into the side of a mountain in the Arctic Circle. Then, one day in October of 2015, something unprecedented happened: researchers began taking the seeds out, rolling 138 black boxes containing 38,000 seeds out of the steel and concrete vault, through its doors and back into the world.

The Svalbard Seed Bank is perhaps the most famous example of a seed bank, or gene bank — a place meant to conserve biodiversity so that, in the event of a catastrophic event like drought, disease or war, key crop species can be repopulated. For the first Svalbard withdrawal, that catastrophe was manmade -- the seeds had been sent to Svalbard before rebels took over another seed bank in Aleppo during the Syrian Civil War. The seeds removed from Svalbard -- a mix of cereals, wheat, barley, fava beans, lentils and chickpeas -- were sent some 3,000 miles to Lebanon and Morocco, where scientists will continue research that had begun in Aleppo. Researchers hope that their projects will help develop new, hardier strains of these crops that could eventually withstand climate change or disease.

The researchers working on these seeds, both in Aleppo and around the world, were lucky. They were able to ensure that duplicates of their seeds existed somewhere other than their gene bank, and they were able to quickly and effectively identify the seeds they needed when they had to make a withdrawal. For hundreds of gene banks around the world -- especially those operating at a regional or national level -- this could easily not have been the case.

Gene banks are often thought of as a last line of defense for biodiversity -- a reassurance that even if the worst should happen, there are backups in place to ensure that the world can still access crucial crops like maize, or important stores of genetic material, like a strain of wheat that grows particularly well in dry climates. In reality, however, gene banks face a slew of problems, from missing key pieces of biodiversity to a lack of communication between gene banks to uncertain funding.

Gene banks are a relatively new concept tied to a very old idea: collecting plants of interest in a particular space in the interest of scientific inquiry. They trace their roots back to botanic gardens, which originally served as repositories for the academic study of medicinal plants as early as the 16th century. Later, as European Imperialism expanded across the globe, scientists and collectors would bring back plants from exotic locations to gardens like the Royal Botanic Garden, Kew, in England. In addition to being used for science, these plants served as the basis for the burgeoning commercial trade of crops like coffee, cocoa and palm oil.

As European collectors increasingly filled botanic gardens with crops from faraway locales, the scientific underpinnings of the gardens became less of a priority. In their stead, breeders began creating collections of plant genetic material that could be accessed to help introduce valuable traits into plant breeds. Then, in the 1960s and 70s, the idea of collecting this genetic diversity in an organized and systematic way — in gene banks — was born.

Today, there are some 1,750 gene banks around the world, preserving more than 7 million samples of seeds, cuttings or genetic material. There are massive, international gene banks like Svalbard, which is managed by the Crop Trust, with help from the government of Norway and the regional organization NordGen. And there are regional gene banks, which operate with small budgets in remote areas. Both are crucial to preserving biodiversity, yet for smaller gene banks, the difficulties associated with acquiring, storing and disseminating the genetic material can be difficult to overcome. International gene banks like Svalbard often have the help of organizations like the Crop Trust and endowments that help them maintain a relatively steady staff of long-term researchers and funding — luxuries that national and regional gene banks can sometimes lack.

Gene banks are an anthropogenic construct,” Christina Walters, research leader for plant germplasm with the USDA’s National Center for Genetic Resources Preservation, located in Fort Collins, Colorado, says. “They are only as good as the infrastructure we humans provide, also the imagination that we humans apply to them. Gene banks don’t create biodiversity any more than libraries create literature.”

That’s a problem, most of all because crop wild relatives often have evolved to grow in less-than-ideal conditions, thriving in places where relatively low moisture or extremely high altitude. As climate change shifts precipitation patterns and global temperature, it’s difficult to say what traits will become most important for crops, which is why preserving traits — even those that previously have not shown much promise for commercial growing — is crucial.

"Think of the human race: we didn't know anything about Ebola 20 years ago, and we had no idea we would need a vaccine for Ebola,” Charlotte Lusty, gene bank programs coordinator for the Crop Trust, says. “It’s the same for a plant in a field. If you’re growing corn or wheat in a field, you have no idea what you’ll need or what disease will come, and that vaccine will come from a gene bank.”

The Svalbard seed vault is filled with more than a million distinct seeds, but keeping them in cold storage is only part of what the vault does.

In addition to missing crucial pieces of genetic diversity, gene banks, especially at the national and regional level, often lack the kind of consistent funding necessary to ensure that the projects can carry out their long-term missions. A gene bank is about much more than collecting plant genetic material for storage — much of the day-to-day work of gene banks involving preparing and shipping samples to researchers and breeders around the world. Directors of gene banks often like to show off the cold-storage rooms, where the genetic material is stored — but those areas are often fairly low-maintenance and low-cost compared to the challenge of actually maintaining the collections.

"It’s not a huge investment to do that,” Lusty says of collecting and storing seeds. “The difficulty comes in monitoring them, making sure they remain viable and distributing those seeds."

Take, for instance, a country like Venezuela, which is in the midst of an economic crisis that has manifested, at least in part, with rolling blackouts across the country. When those blackouts occur, the country’s gene banks — of which it has several — don’t have the electricity necessary to ensure that the seeds remain at an optimal temperature for preservation. Within a few days of a sustained blackout, those collections could be completely lost to the world.

"When it comes to national gene banks, there we are in a very difficult situation. It’s very much the government that needs to recognize the importance and value of these collections," Lusty says.

The challenges associated with regional and national gene banks are a large part of the reason why organizations like the Crop Trust and CGIAR, a global agricultural research consortium that manages 11 gene banks around the world, are so focused on ensuring that no gene bank is an island unto itself. The Crop Trust has campaigned for years to raise an endowment that can be used to help gene banks secure the kind of consistent funding necessary to make long-term investments in research and staff. According to Lusty, the endowment is currently large enough to make anywhere between $5 to 6 million available to gene banks each year — which, considering that a medium-sized gene bank needs about $1 million annually to operate, is far from enough.

"Sadly, governments generally don’t put the kind of resources they need to behind these gene banks to be able to allow them to work to this level, which is why it is essential for something like the Crop Trust to at least support these international gene banks," Lusty says.

And the system does function like that, at least some of the time. But to help the world’s gene banks run even more efficiently, experts like Lusty say that it’s increasingly important for gene banks, at every level, to have a clear way of communicating what they have — and what they need — with one another. To ensure this type of communication pathway exists, the Crop Trust helped set up an online tool known as Genesys, in 2008, that acts as a kind of open-source catalog for participating gene banks. But Genesys remains incomplete, with missing collections that employees at the Crop Trust are working to have included in the database. In April, Brazil’s national agricultural research organization, EMBRAPA, announced that it would add its collections to Genesys, which was a major win for the Crop Trust’s continued expansion of the database.

Ultimately, the image of a gene bank as a “doomsday vault” might be the biggest challenge to overcome. By thinking of gene banks as static, apocalyptic programs of last resort, researchers like Walters worry that the day-to-day role that gene banks play in ensuring food security is ultimately lost on the public.

“People don’t really consider gene banks as actively used -- like a library,” she says. “[The USDA’s] National Plant Germplasm System distributes 250,000 accessions a year. People think of gene banks as if they are a warehouse, as if it’s merely an exercise of putting seeds in bags and putting bags in the freezer. But the utility and the accessibility of the genetic resources in the gene bank is the big story.”