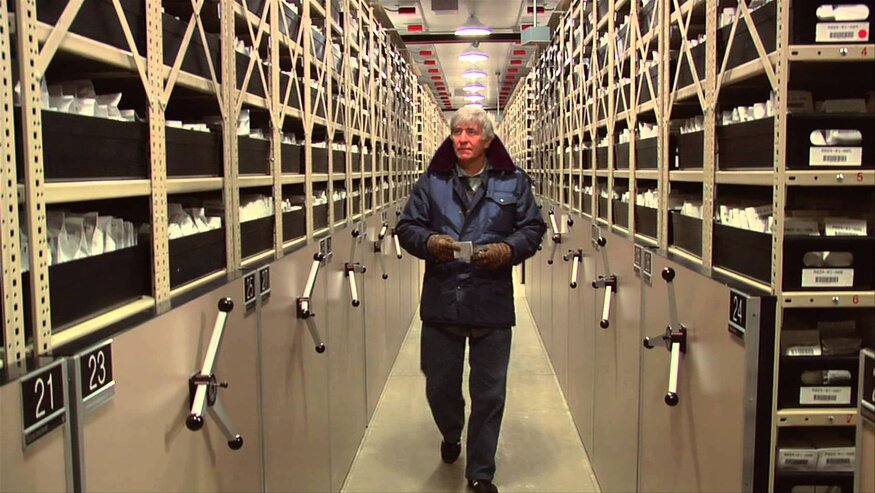 Efforts to preserve and protect plant information are accelerating — but not without risks, reports Claire Provost in SciDev.Net.

As an increasingly bloody civil war raged around them, a team of scientists in the Syrian capital Aleppo quietly packaged and shipped a series of nondescript cardboard boxes to an island not far from the North Pole. The boxes bore no sign of the conflict that had surrounded them or the precious material they contained.

The scientists, from an International Centre for Agricultural Research in the Dry Areas (ICARDA) research station, had carefully packed up thousands of samples of barley, wheat, chickpea and other seeds: a treasure trove of genetic diversity.

“It was extraordinary,” says Ola Westengen, one of the scientists’ Norwegian colleagues who received the seeds. Westengen saw the seeds safely stored in a special vault buried in the permafrost on an Arctic archipelago. “These seeds are extremely valuable.”

The samples from Syria now sit alongside hundreds of thousands of others — sent by teams in countries from Burundi to Uzbekistan — at the Svalbard Global Seed Vault, perhaps the most famous seed bank in the world.

Built to withstand anything from a nuclear strike to rising sea levels, the Svalbard Vault was a media sensation when it opened in 2008. Its unique location, state-of-the-art facilities, and dramatic ambitions led some to dub it the “Doomsday Vault”. José Barroso, then-president of the European Commission, called it a “frozen garden of Eden”.

Westengen, who was until recently coordinator of operations at the Vault and now works at the Norwegian University of Life Sciences, describes his colleagues’ work shipping seeds from Syria as “heroic”.

But he is not entirely pleased with some of the publicity the Vault has attracted. “It's not a stand-alone project,” he insists. “And it's not some kind of time capsule up there for ‘doomsday’, which is the impression you can get from some of the media reports.”

Instead, Westengen describes it as the “ultimate back-up” for a vast network of seed banks around the world — including the one at Aleppo. “You have to look at this as part of the larger system. It's only as part of this system that it makes any sense.”

A world of seed banks

Collecting and saving seeds is nothing new — it is as old as farming societies themselves. But now this mission is the motivating force for a growing contingent of scientists across the globe, engaged in what some frame as a veritable race against time to conserve the world’s crop diversity before it is lost forever.

“We should look at crop diversity as we look at water and air. This is a very fundamental natural resource,” says Marie Haga, a former Norwegian government minister who is now the executive director of The Global Crop Diversity Trust, the international organisation that oversees the Svalbard Vault.

The Crop Trust was set up after The international treaty on plant genetic resources for food and agriculture (sometimes called the “Seed Treaty”) came into force in 2004. [1] Among other things, the treaty established a multilateral system to facilitate access to plant genetic resources, focussed on 64 priority crops.

Today more than seven million samples of seeds, tissues and other plant materials from food crops and their wild relatives are stored in an estimated 1,750 seed banks around the world.

Most of these were built in the last few decades, as scientists worldwide sounded the alarm over growing threats to biodiversity and the potential consequences this could have for future food security (The UN’s Food and Agriculture Organization estimates that 75 per cent of global crop diversity was lost between 1900 and 2000).

But many of these repositories are located in risky environments. The national seed collection in Côte d’Ivoire was largely destroyed during the country’s civil war. In 2011 looters in Egypt damaged collections in both Cairo and North Sinai.

“In fact, any building on the surface of this earth is vulnerable somehow and it’s a good idea to have a backup,” says Westengen. “That’s the role of Svalbard.”

The idea is that if existing collections are lost or damaged, they can be replenished using what scientists call their seeds’ “safety duplicates”.

Today, more than 60 seed banks globally have already sent samples to Svalbard. Since it opened in 2008, its collection has more than tripled in size from just under 268,000 samples of everything from maize to radish to almost 840,000 by the end of 2014.

But some say the work has just begun. The Crop Trust, set up in 2004 as a financing mechanism to conserve the world's crop diversity, is working on nothing less than what it calls “a global system of ex-situ crop conservation”.

In addition to the Svalbard Vault, this ‘system’ comprises nearly a dozen international seed banks, housed within the research institutes of the Consultative Group on International Agricultural Research (CGIAR) and organised around specific crops — such as maize and wheat in Mexico or rice in the Philippines — plus more than a thousand national seed banks and other collections scattered around the globe.

“Many of these [local collections] are unfortunately in poor shape, and some of these hold very important material” says Haga. “The biggest challenge is to raise standards in the seed banks that need to be part of this global system, and to fund this global system.”

The Crop Trust’s goal is to develop a structure that would allow the world’s seed banks to maximise their resources by integrating their collections and sharing detailed information about what they contain.

“There are way, way too many seed banks. There is a lot of duplicate material,” says Michael Koch, the Crop Trust’s director of finance. “There certainly isn’t enough money for 1,700 collections but we don’t need so many either.”

How this streamlining will work in practice is still being hammered out. In January, the Crop Trust held an international meeting with different stakeholders to discuss how best to build the “global, rational and cost effective system” it desires.

A draft strategy paper discussed at the meeting estimates that there are likely 100 or so “globally significant collections” of crop samples which should be prioritised. Collections that receive the Crop Trust’s support to be integrated into the global system will need to be accessible to researchers and meet technical standards set by the organisation.

But nothing is happening overnight. Groups of experts are now working to identify collections to prioritise and select which ones need help first.

And before any of this can be put into action, the Crop Trust still needs to answer the multi-million dollar question of how to pay for it.

“There’s always this challenge of secure funding for the long term. My seed might last for 200 years, but my money only for two years. That’s the contradiction,” says Jonas Mueller, senior research leader at the Millennium Seed Bank Partnership, at Kew Gardens in the United Kingdom, which is working with the Crop Trust on a multi-year project to collect and preserve samples of the “wild relatives” of the world’s staple crops.

The aim of the Crop Trust is to secure funding to conserve crop diversity indefinitely. But they know this is a difficult ask.

“This is why the endowment was created — so we don’t need to go around and beg for money every year,” says Koch. The idea is that donors are only asked to give once, with the endowment’s funding being invested so that it is self-sustaining.

Koch is now working towards a 2016 pledging conference, where dozens of countries will be asked to contribute towards the Crop Trust’s immediate goal of raising the endowment to US$500 million. So far, almost US$170 million has been paid in, more than 90 per cent of that by governments.

“If we don’t meet this goal then we will not have the resources in full to manage the crop collections and with funding running out, I don’t know what would happen,” says Koch.

This US$500 million would allow the Crop Trust to continue its current work. But in order to expand and help finance the integration of national and regional collections into this system, it says it will need significantly more: for this, it’s looking to raise a further US$350 million (bringing the endowment to a total of US$850 million) by 2018.

Outside Addis Ababa, the Ethiopian capital, hundreds of dark, tightly sealed jars are filled with seeds and stored on tall wooden bookshelves at the Ejere community seed bank.

Regassa Feyissa, an agricultural research scientist and former coordinator of the African Biodiversity Network, explains that community seed banks like this offer the chance to conserve genetic diversity at the level of local farmers while also serving as grain reserves during hard times.

“We saw at times of crisis how gene banks are not an immediate remedy — in part because they store seeds in grams, small volumes,” explains Feyissa. Community seed banks, he says, store bigger volumes of seeds, and keep them in farmers’ hands.

Yet the Crop Trust stresses that its goal is not only to safeguard diversity but crucially to make it available. In January it launched DivSeek, an initiative to systematically catalogue the genetic makeup of banked seeds. The idea is to open up local collections to researchers working on creating new crop varieties anywhere in the world.

But some have raised concerns that researchers in developing countries may lack the computing power to crunch DivSeek’s data and so unless this infrastructure is improved, the creation of such databases may be of limited use to them.

Meanwhile, farmers’ organisations in developing countries are increasingly sounding the alarm that it is getting harder for them to conserve biodiversity at farm level in part because of laws and policies that require that seeds to be registered in official catalogues in order to circulate — requirements that small farmers may struggle to meet.

“More than 80 per cent of all seed in Africa is produced and disseminated through informal seed systems, that is, on-farm seed saving and exchange between farmers,” said Bridget Mugambe, policy advocate at the African Food Sovereignty Alliance, in January. New legislation and strict marketing regimes being introduced in some countries could effectively criminalise these practices, she warned, spelling “disaster for our small family farmers”.

When the Svalbard Vault first opened, the environmental organisation GRAIN warned that it would give “a false sense of security in a world where the crop diversity in the farmers' fields continues to be eroded and destroyed at an ever-increasing rate”.

A focus on conservation in seed banks is “fundamentally unjust”, it added. “It takes seeds of unique plant varieties away from the farmers and communities who originally created, selected, protected and shared those seeds and makes them inaccessible to them.” This strategy “caters to the needs of scientists, not farmers”, it concluded.

Haga says that while the Crop Trust’s mandate is “ex situ” conservation, “my very firm view and conviction is that we need to conserve crop diversity both in the field and in plant genebanks.” Both, she says, “are important and we should work on both in parallel”.

Syria is pointed to as an example of how today’s seed banks fit into a worldwide network, and should not be seen as isolated treasure troves. At the ICARDA research station outside Aleppo, scientists had started duplicating their seeds for safe-keeping before the civil war broke out.

In March, the scientists at the seedbank in Syria won the prestigious Gregor Mendel Innovation Prize for their work rescuing and preserving their collection. Accepting the award in Berlin on their behalf, Mahmoud Solh director of ICARDA, said: it is “a resource we cannot afford to lose”.