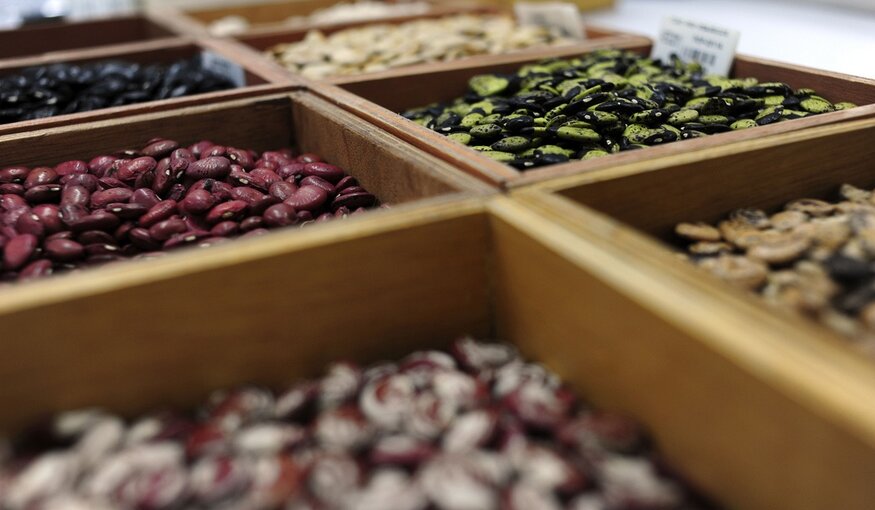 Virginia Gewin discusses the launch of DivSeek in Science Magazine.

Agricultural gene banks hope soon to cease serving primarily as warehouses for plant seeds and start capitalizing on the often hidden value of some 7 million seed deposits held in more than 1700 repositories around the world.

“DivSeek is an idea whose time has come,” says Peter Wenzl, a newly hired scientist who will serve as the DivSeek liaison from the Global Crop Diversity Trust in Bonn, Germany. It can take up to a decade to transform raw germplasm into new crop varieties, he notes, and developing better ways to characterize banked seeds and share information about them could help accelerate the process.

Gene banks, which store countless varieties of major and minor food crops, have long been viewed as important players in helping address food security. But developing a global framework for studying and sharing this genetic wealth has been a long-standing challenge, marked by perennial funding problems and, prior to the adoption of an international agreement, sometimes fierce debates over who owns and should benefit from banked seeds. Perhaps the biggest hurdle has been galvanizing the will and technical ability to coordinate and fund data sharing, says Hannes Dempewolf, a scientist at the Global Crop Diversity Trust.

DivSeek aims to accelerate the process by creating a unified front. The international consortium includes 69 public sector partners, notably 15 of the world’s major crop research centers, known as the CGIAR Consortium of International Agricultural Research Centers. It is also backed by the organization that administers the International Treaty on Plant Genetic Resources for Food and Agriculture (ITPGRFA), which established a global system for exchanging germplasm.

Wenzl became an early advocate of developing DivSeek after spending the last 3 years heading up a $70 million international program called Seeds of Discovery, which genotyped tens of thousands of maize and wheat accessions at the Mexico-based International Maize and Wheat Improvement Center , a part of the CGIAR system. The experience convinced him that a larger initiative to share information on traits and genes of interest would be beneficial across a broader range of crops.

At the same time, technological advances, notably cheaper genome sequencing and robust data sharing platforms, are making it easier to collect and widely share such information, Dempewolf says. “We saw what was happening in other sectors, such as personalized medicine, and knew gene banks could accomplish a lot, a lot faster and more efficiently, if only we could get the right people together.”

The first step, DivSeek’s organizers say, will be to get gene bankers and plant breeders to agree on standards, tools, and protocols to generate, organize, and share information on gene bank holdings. Some groups, for example, are already working on creating a global system of unique identifiers for each gene bank accession. An online database called Genesys already lists gene bank contents around the world and could become a starting point for a network of linked databases. And there are a range of “experiences, genomics platforms, information management tools, and software that can be shared so they are useful across a range of crops,” Wenzl says.

Those are largely logistical hurdles. DivSeek’s near-term challenge will be uniting disparate groups—including private seed companies, funding agencies, crop breeders, and researchers—behind a defined set of achievable tasks, Dempewolf says. And as the coalition documents germplasm diversity, it can’t “forget about people who generate, maintain, and constantly augment that diversity—the farmers in developing countries,” says Daniele Manzella, a treaty support officer for ITPGRFA, which is coordinated by the Food and Agricultural Organization of the United Nations in Rome.

It’s not yet clear how industry will fit in. “Industry has a role to play and it will be interesting to see how it evolves,” Manzella says. “It doesn’t make sense to improve the way we do research if it doesn’t have any impact on innovation.”

“Preserving diversity for diversity’s sake is good, but in the end we need to … find where useful diversity—the genes for traits that plant breeders can incorporate into new varieties—lies,” says Bradley Kurtz, senior manager of intellectual property at DuPont Pioneer, a major seed company based near Des Moines. He supports the initiative, saying it could pay off for all involved.

It’s also not clear how much DivSeek’s activities will ultimately cost—or how it will be paid for. A 2013 commentary in Nature envisioned a similar scheme costing $200 million annually. DivSeek has not yet started fundraising and some, like Manzella, think it should remain a bare-bones operation, especially because funding agencies appear to be interested in backing seed bank mining efforts. The German Agency for International Cooperation, for instance, recently funded a $1 million project to characterize more than 12,000 potato and sweet potato varieties at the International Potato Center in Lima. “I thought it was too big of a project until DivSeek conversations got under way,” says David Ellis, head of the center’s gene bank. In addition, the ITPGRFA organization will soon make a final decision on funding for exploratory projects to coordinate the exchange of seeds as well as the value-added information that comes from characterizing them.

Wenzl cautions that DivSeek won’t be quick to take off. “There’s an old African phrase: ‘If you want to go fast, go alone. If you want to go far, go together,’ ” he says. But the clock is ticking, he adds: “We’ve got to figure out how to set global priorities for the sake of food security.”