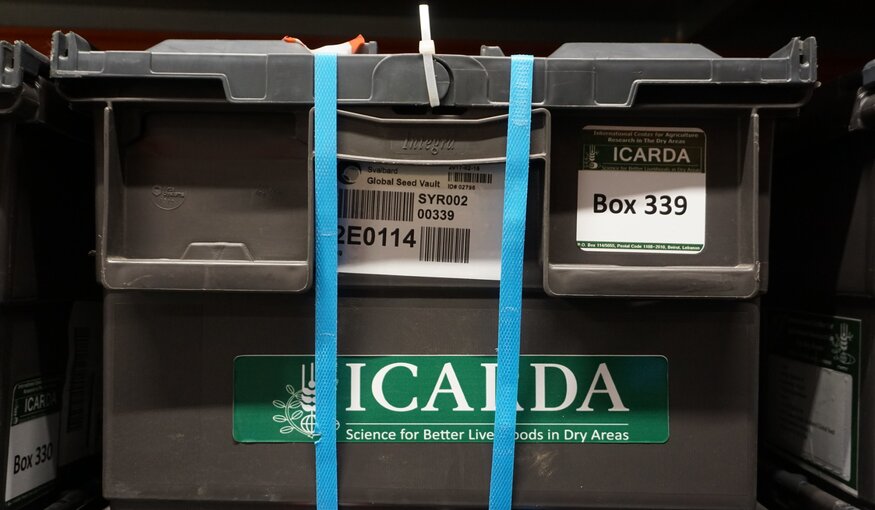 IN 2014, THE remaining staff of the International Center for Agricultural Research in the Dry Areas, or ICARDA, fled their beloved gene bank in Tel Hadia, 20 miles south of Aleppo. Syria’s civil war, which had broken out three years earlier, had finally made the staffing of the facility untenable. But the scientists had already shipped off a resource of incalculable value: the seeds of the most important crops on Earth.

The destination of these little bits of genetic information was the Svalbard Global Seed Vault, a frigid facility sticking out of the permafrost on a remote Arctic island. ICARDA staffers had been among the first to deposit seeds after the vault opened in 2008, stashing away unique varieties of chickpeas, lentils, and alfalfa, among many others. They were backing up their own collection, a standard practice among some 1,700 seed gene banks dotted around the world, which are meant to preserve the genes that code our essential crops for resistance to disease, pests, and climate change. Syria’s civil war had been the most dramatic example why you’d want to do such a thing: The treasures inside the ICARDA facility required constant upkeep, and as the war raged on, it became increasingly difficult to tend to them.

Ultimately, the researchers sent three more shipments north between the years 2012 and 2014, before abandoning their own facility. All told, they ended up sending some 116,000 accessions—or seed samples representing a population of plants from a certain location—to chill in Svalbard’s -18 degrees Celsius stacks. Those samples represented 83 percent of ICARDA’s total holdings at the time of the outbreak of civil war.

The conflict in Syria has not ceased, but by 2015, the ICARDA staff couldn’t wait to restart operations: A gene bank exists to preserve unique seeds, but also to distribute those seeds to researchers and farmers. So they became the first—and remain the only—depositors to make a withdrawal from Svalbard, combing the stacks for tens of thousands of samples and shipping them to new ancillary operations in Morocco and Lebanon. From each sample they took only 300 seeds, and started planting. “This was a task that really made us not sleep sometimes at night,” says Mariana Yazbek, gene bank manager at ICARDA and a coauthor on a recent paper in Nature Plants describing the saga.