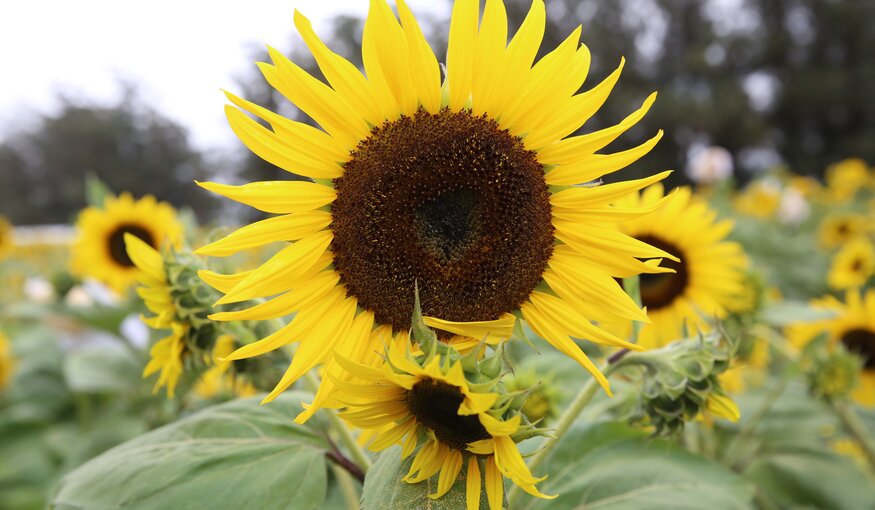 Early this year, the Crop Trust’s very own Luis Salazar visited Argentina, where our Crop Wild Relatives Project pre-breeding partners from the National Agricultural Technology Institute (INTA in the Spanish acronym) are evaluating hundreds of new crosses between wild and domesticated sunflowers, searching for resistance against three of the most harmful diseases affecting global production. The slideshow below gives you a taste of his trip deep into the Argentinian pampas.

Roses aside, the sunflower’s seed-filled head encircled by a thick ring of yellow petals is probably the most recognizable flower in the world. In the late 19th century, it was made famous by the Dutch painter Vincent van Gogh, who painted his now iconic sunflower masterpieces in the south of France. But make no mistake: the sunflower is not a European plant.

It is originally from the Americas. In fact, archaeologists estimate that sunflowers were being cultivated by native Americans roughly 10,000 years ago, even before staples like corn, squash or beans were domesticated.

The Spanish brought the sunflower to Europe around 1510. It later moved on to Russia thanks to Tsar Peter the Great himself, who first saw the plant in The Netherlands on one of the fact-finding trips he took in his effort to modernize his country. Sunflowers gained popularity quickly in Russia, mostly due to the fact that sunflower seed oil could be consumed during Lent, unlike other oils that the Orthodox Church banned during that period.

Though used in floral arrangements everywhere, the sunflower is grown mostly for the oil in its seeds. Today, Russia is the largest producer. But you can find the crop in more than 70 countries around the world - from Uganda to China to Argentina.

Sunflower made its way back across the Atlantic to Argentina in the 19th century. In 1881, in response to anti-Jewish pogroms in Russia, President Julio Argentino Roca promoted the immigration of Jews to Argentina. And they brought their sunflower seeds, which thrived in their new country.

Until 2002, the sunflower was a crop of enormous importance in Argentina. At the time, about 18% of the world’s sunflower production came from there. More recently, however, this figure has dropped to 7%. Though there is no single cause for this huge decline in production, everybody we talked to during our visit to Argentina stated that the most important cause was that farmers preferred soybean.

In a good year, soybean brings in a lot more money. As a result, sunflower production has gone down, and been forced to relocate to poorer soils and new regions in the country where it had not been grown before.

In terms of performance, sunflower is about as sure a bet as one can make. It is genetically well-equipped to withstand drought and salinity, two of the most important abiotic stresses that affect its productivity. It grows in very diverse conditions – from desert dunes to salt marshes. Even in a bad year, when there is drought or disease, sunflower farmers know they will be able to will make a decent return on their investment. So it hangs on, despite everything.

But it clearly needs a helping hand. That’s why the Crop Wild Relatives Project (CWR) is supporting a multi-country effort that is exploring the potential of the sunflower’s wild cousins.

This program is being led by our partners at the University of British Columbia (UBC) in Canada. They crossed 28 wild sunflowers with an elite domesticated sunflower (called HA89), resulting in 400 new hybrid offspring. In India, our partners at the Indian Institute of Oilseeds (IIOR) are evaluating the tolerance of these new lines to heat. In Uganda, trials are focusing on their resistance to low nutrient stress. Meanwhile, SOLTIS, a French seed company, is analyzing their oil content.

Initial results are more than promising. “An unexpected but welcomed result is that some of these new pre-bred lines have even higher oil content than the HA89,” says Emily Warschefsky, a postdoctoral researcher working with renowned botanist Loren Rieseberg at UBC.

In a truly international collaboration, the United States Department of Agriculture (USDA) is responsible for seed multiplication, maintenance and distribution. In Argentina, INTA is carrying out evaluation trials for tolerance to various diseases, which remain the primary concern of producers and seed companies in the region.

In five days, we traveled 2,100 km, exploring the southern part of Buenos Aires Province and the north and north-eastern parts of Patagonia – two of Argentina’s three main sunflower producing regions.

During our expedition, we visited several trial sites where the INTA team is evaluating 222 pre-breeding lines. Their goal is to identify the ones that are resistant to three major diseases: Verticillium wilt, stem canker and downy mildew.

We also met producers, agribusiness leaders, breeders and researchers from national and international seed companies, and representatives from civil society organizations involved in the sunflower value chain. Emily Warschefsky joined us during those long, busy days, and shared with them the project’s philosophy, goals and most recent findings.

A special thanks goes out to Norma Paniego, Principal Investigator at INTA, who is also the national leader of the CWR sunflower pre-breeding project, and to Juan Montecchia, a postdoctoral student, who is leading the Verticillium trials. Their passion, knowledge and commitment was inspiring. Thank you too to all the INTA colleagues who welcomed us, for an unforgettable experience.

The trip reconfirmed the crucial role biodiversity plays – and will continue to play – in adapting our agriculture to new realities.