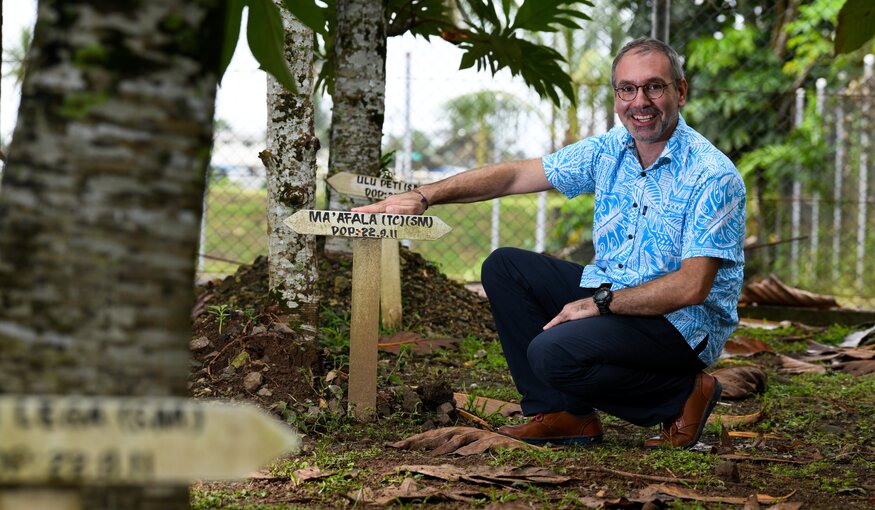 Donors, Pacific Community (SPC) scientists and the Crop Trust will meet in Suva, Fiji, at the end of March to discuss ways to raise money for the genebank of SPC’s Centre for Pacific Crops and Trees (CePaCT).

CePaCT conserves a wide range of some of the most important crops for the region and globally, including staples like yam, taro, banana, and sweetpotato. Each year it shares thousands of samples with farmers and scientists in the region and beyond. Its work supports global efforts to address food and nutritional insecurity, and improve the resilience of agriculture to climate change and pest and disease outbreaks.

The CePaCT genebank proved its importance to regional food security in 1993, when an outbreak of the devastating taro leaf blight fungus hit producers of the crop in Samoa. CePaCT was able to distribute TLB-tolerant varieties to farmers, saving the crop. Following more recent outbreaks of TLB elsewhere, it has provided 50 different kinds of taro to countries in Africa, Latin America and the Caribbean, Asia, and the Pacific.

To further strengthen its work, CePaCT aims to upgrade its facilities and expand its network of partners around the world. This will enable it to improve its conservation efforts, support the distribution of new, improved varieties more widely, and share more of the crop diversity it already conserves. It will require a range of new investments, for example, in developing new approaches to conserve difficult crops like coconut and breadfruit, in using cryotechnology for long-term conservation, and testing and cleaning planting materials to ensure they cannot spread viruses and other diseases.

A complementary objective is to bring the genebank into line with the standards set by the Food and Agriculture Organization of the United Nations (FAO). Crucially, once the genebank hits agreed performance targets, including being able to ensure that at least 90% of the crop samples it conserves are readily available for distribution upon request and backed up securely in a second location, it may qualify for permanent funding of its essential operations from the Crop Trust endowment fund.

Participants at the forthcoming Donor Roundtable meeting in Suva will discuss ways for CePaCT to raise the money it requires to achieve these goals. Donors will be asked to consider three different funding options, all of which aim to strengthen the activities and impact of the genebank. They include contributions to the Crop Trust endowment fund to support the genebank over the long term.

“The CePaCT genebank is one of the most important in the world and supporting its upgrading is vital to food and nutrition security not just in the Pacific, but globally too,” said Marie Haga, Executive Director of the Crop Trust. “It has developed in leaps and bounds over the years and now it needs financial support to go the last mile to become a truly world-class facility. The Donor Roundtable will help donors keen on supporting sustainable agriculture to channel their investments for both short-term and long-term impacts.”

“Conserving, sharing and redeploying crop diversity can provide the foundation for improving livelihoods in the Pacific islands which depend on agriculture and ensuring their resilience in the face of climate change,“ said Audrey Aumua, SPC Deputy Director General.

SPC Head of Genetic resources, Michel Ghanem, said: “This is a great opportunity to support the CePaCT Investment Plan and long-term funding and future efforts to build the capacity of CePaCT to serve the 22 Pacific Island Countries and Territories (PICTs) in conserving, and facilitating the exchange of clean and diverse, climate smart, nutrient rich planting materials.”

CePaCT was established in 1998 with funding from the Australian Government and the European Union and is part of the Land Resources Division of SPC. Its core aim is to assist Pacific Island countries and territories (PICTs) to conserve the region’s genetic resources, and to provide access to that diversity when they need it. SPC is keen to transform CePaCT into a globally recognized Centre of Excellence within its Land Resources Division.

The Crop Trust provides long-term financial backing to CePaCT’s taro and yam collections, and has supported work to move material from the field to its in vitro genebank. Past projects also include the evaluation CePaCT’s core taro collection in Papua New Guinea to see how the plants fare under drought conditions and in atoll environments, and the center’s work to put together a comprehensive collection of Pacific bananas. Under the DFAT-funded Strengthening Crop Conservation Post-Cyclone Winston project, work included restoring its breadfruit field collection and installing measures to protect them against extreme weather in the future. It also funded the purchase of air conditioning units and dehumidifiers to ensure optimal conditions for conservation inside the facility. In addition, a new building is under construction at the CePaCT genebank site, to house duplicate plant samples as part of a backup system.