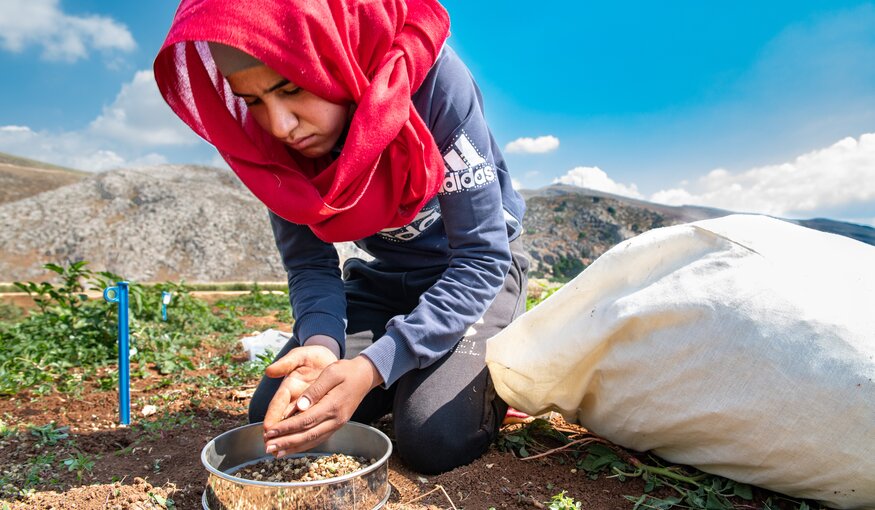 At the COP26 UN Climate Change Conference earlier this month, global leaders discussed how to best strengthen the world's ability to adapt to increasing climate change impacts. A parallel session at the Global Landscapes Forum (GLF) Climate Conference offered one example of a solution already being used, starting with a surprisingly small element: the seed.

“Seeds are a lot more important than you think,” said Nora Casteñeda-Álvarez, the Crop Trust’s Seeds for Resilience project manager, during the "It Starts with a Seed: Adapting Agriculture to Climate Change" panel discussion at the GLF Climate Conference.

“I see them as Lego pieces: the building blocks of our future food and nutrition security,” she said.

There is no greater threat to global food security than climate change. But seeds offer hope that agricultural systems can adapt to meet the challenges ahead.

That’s why seeds are the starting point for the new Biodiversity for Opportunities, Livelihoods and Development (BOLD) Project, a 10-year initiative led by the Crop Trust and fully funded by the Government of Norway.

Among other objectives, BOLD aims to help low-and middle-income countries conserve and use seeds to develop crop varieties that are more resilient to climate change.

Again and again, the experts that spoke during the “It Starts with a Seed” session underscored the importance of such long-term approaches to seed conservation and use for adapting food systems to the climate crisis. Five key messages stood out:

1: Genebanks play a vital role in ensuring we have enough food for everyone, now and in the future.

Éliane Ubalijoro, professor at McGill University and a member of the Crop Trust’s Executive Board, offered the example of her birthplace, Rwanda, where unharvested crops rotted in the fields after the 1994 genocide. In that case, genebanks played a critical role in the rebuilding of the small nation’s agriculture.

“If it hadn’t been for the…genebanks around the world that held seeds of crops that are grown in Rwanda, it would have been very difficult for Rwandans to restart agriculture,” Ubalijoro said.

National and international genebanks and the Svalbard Global Seed Vault are all needed to store critical backups of diverse seeds “to ensure we can continually feed humanity,” she said.

The BOLD Project will support low- and middle-income genebanks and other seed collections to safety-duplicate their invaluable collections and store them in the Seed Vault.

“The world’s crop diversity is at risk and the Seed Vault was built specifically to safeguard back-up copies of the seeds needed for developing new plant varieties to feed a growing population in a changing climate,” explained Åsmund Asdal, Global Seed Vault Coordinator at the Nordic Genetic Resource Center (Nordgen), which operates the vault.

2: A new Emergency Reserve will provide urgent financial support to genebanks in need to ensure we do not lose critical diversity.

It’s clear that the world needs genebanks and the precious seeds they store. Yet, genebanks are not indestructible.

Natural disasters, political crises, pest and disease outbreaks, equipment failure and, most recently, the challenges caused by the global pandemic can all precipitate catastrophic losses of the invaluable resources they conserve.

Therefore, the Crop Trust and the International Plant Treaty have together launched an Emergency Reserve to provide a financial lifeline to genebanks facing urgent threats. The Reserve will respond to pressing requests from genebanks in low- and middle-income countries to prevent such losses.

“The reality is that until now there hasn’t been a structured, predictable and consistent way to respond to these crises,” said Kent Nnadozie, Secretary of the International Plant Treaty.

Two donors have already come forward to support the initiative: the governments of Italy and Norway, the latter again through BOLD.

Explained Nnadozie, “[The Reserve] will provide a funding mechanism that can respond rapidly when there’s an imminent threat to unique crop diversity collections that fall under the Treaty framework.”

3: Climate change is making it harder for farmers to do their jobs, but they remain the frontline against global food insecurity.

In her opening remarks to the session, Norwegian Minister of International Development Anne Beathe Tvinnereim cautioned that “We will not meet the challenges of our time from combating climate change to ending extreme poverty without the contributions of 500 million small-scale farmers around the world."

As one of its fundamental elements, the BOLD project specifically addresses putting climate-resilient seeds into the hands of farmers—through new and existing pathways, including so-called “informal” seed systems.

“As I understand it, 70 to 80% of farmers are using informal seed systems," explained Daniel van Gilst, senior agricultural advisor at the Norwegian Agency for Development Cooperation. That means they obtain seeds through the local market or by exchanging seeds with other farmers."

“That group of farmers is not really being reached as far as [current] research is concerned. They’re not being helped to the extent they could be.”

BOLD will build on another successful program funded by Norway, the Crop Wild Relatives (CWR) Project, which is coming to an end this year after more than a decade of impact. Under BOLD, there are plans to increase the focus on building strong relationships with farmers.

“In the war against poverty and climate change, we could do no better than enlisting this potentially powerful army of willing hands,” said Beathe Tvinnereim.

4: BOLD is building on the past successes of the Crop Wild Relatives Project to ensure food security for future generations.

The CWR Project was a pioneering effort to conserve critical gaps in the diversity of key crops held in genebanks worldwide and use that diversity to develop new, climate-resilient varieties.

Among other activities, BOLD will expand on the most successful pre-breeding partnerships of the CWR Project and strengthen the linkages between genebanks and seed systems—the latter being a vital aspect of ensuring food security that has been little addressed thus far by the conservation community.

“For me, BOLD is a critical pathway to caring for future generations and doing all we can to ensure all children have nutritious food,” said Ubalijoro.

It’s a sentiment shared by Crop Trust Executive Director Stefan Schmitz, who said “We need to act now, and we need to act boldly to ensure a food-secure future for our children and grandchildren.”

5: We need long-term, forward-thinking initiatives like BOLD for maximum impact in conserving and using biodiversity.

At a time when long-term funding commitments can be hard to come by, the Norwegian government has stood out for its different approach.

Van Gilst said that Norway is committed to preserving biodiversity and understands that the process of collecting, analyzing and utilizing the diversity of seeds around the world takes time.

“You have this whole chain of events you need to do to make a wild seed usable within a seed system,” he said.

Indeed, it can often take a decade or more for plant breeders to turn the raw materials of crop wild relatives into a new variety with traits that make it resilient to climate change. But this also means that seeds properly conserved and documented today will continue to provide useful traits for decades, if not hundreds of years into the future.

Concluded van Gilst, “Within the seeds [we collect now] are the solutions that we’re going to be having in the future. It’s only the seeds we have today that hold the solutions for tomorrow. That’s what we have to work with. So, biodiversity, again and again, is the main goal here. With biodiversity, we can help adjust and adapt to the situation of climate change.”