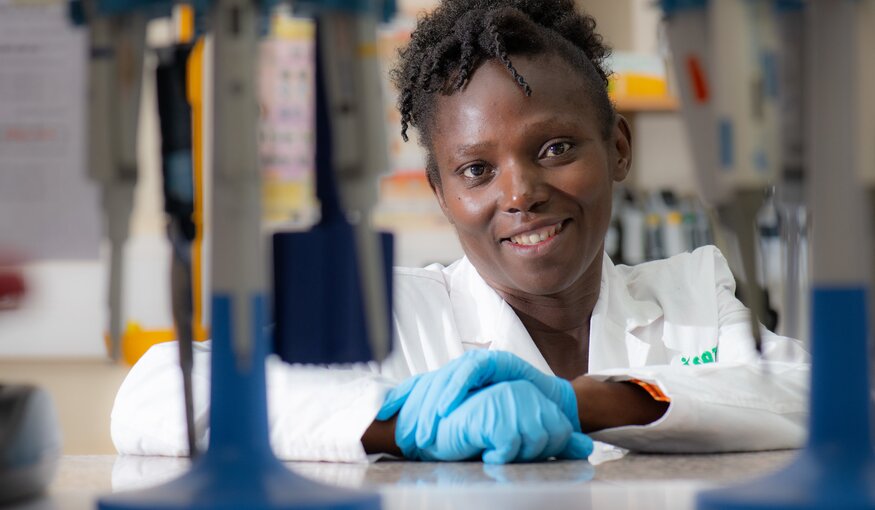 Damaris Achieng Odeny is a plant geneticist from Kenya who works at the regional office of International Crops Research Institute for the Semi-Arid Tropics (ICRISAT) in Nairobi. As a child, Damaris saw how her father, a sugarcane grower, lost the crop the family depended on to drought and disease. This experience motivated Damaris to look for solutions.

After earning a PhD in plant genetics from the University of Bonn and carrying out research at the Max Planck Institute for Plant Breeding Research (Germany) and at the Agricultural Research Council (South Africa), Damaris took up a position at ICRISAT, developing genomic resources for a range of crops. Among other things, she is now leading a finger millet pre-breeding project funded by the Crop Trust. The project aims to introduce genetic diversity from wild relatives into the cultivated crop, with the goal of improving finger millet’s resistance to environmental stresses like pests and diseases.

We spoke with Damaris to learn more about her career path, and her advice for other women in science. The transcript of the conversation has been edited for clarity.

I’ve always been fascinated by things that are going on around me, trying to figure out why things happen the way they do. Growing up on a farm, in an agricultural environment, I always wanted to know why the things I was seeing were productive or not, why they were the way they were. So, agricultural science was the best field for me to work in to be able to answer those questions.

Did you have any role models?

I did. As I was growing up, when I was a little girl, I saw my parents as my role models. When I got a little bit older, it was my brother. I must say: my older siblings were into science, and they really encouraged me.

I had a brother who was into science, he works now in the medical field. My sister was very good at math and ended up working in a bank. So, when I was a little girl, my parents were my role models and that evolved to my siblings, and later that evolved to my teachers and other people working in the field. I always had role models, and I still have them even now.

Would greater visibility of women scientists encourage more girls to pursue a career in this field?

Absolutely. I work with amazing young girls who are in my group trying to build their careers. Many times, they would say, “If I hadn’t seen you being that successful, I wouldn’t have imagined that I could do this.”

When they join, they can be very reluctant and question what they can get out of it. But with time, as you keep mentoring them and exposing them to other successful scientists, they realize that this is where they want to be.

In areas where you don’t see many women, there won’t be women in those fields. For example, we have very few women involved in bioinformatics in the region. And that situation gets worse because women do not see other women succeeding, and they are very reluctant to choose this. But when you actively recruit role models to help, then you find a lot more women engaging in science.

What else can we do to encourage more girls to have careers in science?

Having successful women in science engaging more with young girls. And it should start really early.

There are a lot of initiatives trying to mentor women, but they tend to start late, when girls are already in high school or university, or they are already starting their career. But we need those women engaged with girls very early on, in primary school, in their basic education, and to just do cool things with them.

Let them know that science is cool – some of us have been there before, and we are successful and happy, and we are changing the world. I think that’s the only way to have more women get involved in some of these activities.

Why do we need more women in science?

First of all, let me say that I think we need to have both men and women in every single field. The reason we are emphasizing women in science is because women have been lacking significantly in that area.

For that reason, we missed a lot of innovations that would have been done with women. I will just give you one example in agricultural research. In Sub-Saharan Africa, most of the farmers are women. If you go to the rural places, more than 50 percent are women. They are involved in farming, in the labor, in processing, in marketing. Now, when you have women in science going back to work with those women, it changes the perspective completely.

For a long time, we had women absent from scientific research, and for that reason we missed some really important things, like the cooking time for beans. That’s something that was not even thought about. But when you get women involved, those are things that actually matter to them.

My mom struggled with this. So, when I go to research, I can identify with that kind of thing so it will be beyond just money-making activities, but also things that save you time and labor, which would sometimes go unnoticed. Because if men are doing that research, that’s not something significant to them. So, it’s absolutely significant to have both men and women in every single field. For now, the emphasis is on science because women have been absent. They have been missing for a long time, and they still are.

For me, the most fascinating thing is when I discover something new, and I go to publish it and let people know. It gives me so much pride, especially when I am doing that on my continent.

It is so rewarding to be able to do something and discover something new, to be able to share it out there proudly with your name on it. Usually, I get so excited that I am not even able to sleep until I complete this kind of task.

Also, to know that such results are going to change somebody’s life. I am based in Nairobi, Kenya, and we live amidst a lot of poverty. Lot of people here are farmers and are affected directly by farming. If I am able to discover something, however small, and know it will change their livelihoods and their incomes. That gives me so much joy.