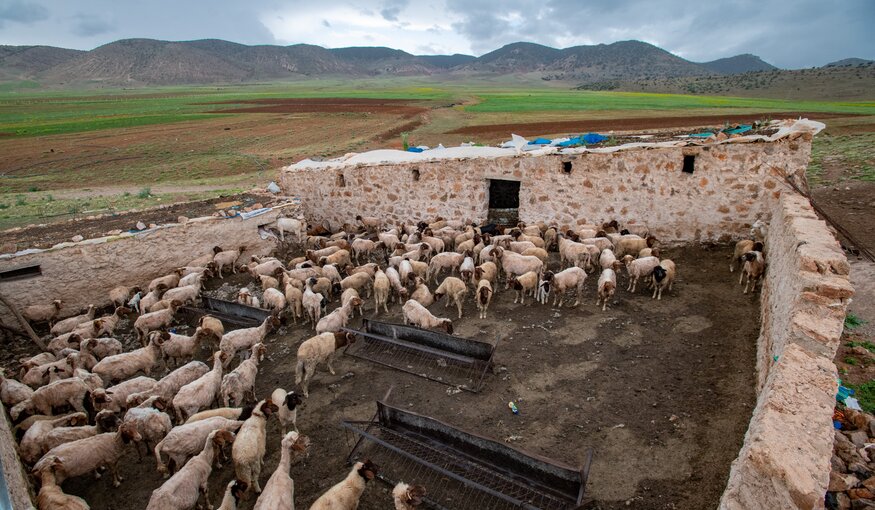 Increasing demand for cheap meat and milk is widely blamed for driving deforestation, as land is cleared for cattle. And all those cows also burp a lot of methane – a major greenhouse gas produced by the digestive system of ruminant livestock. But using the right feeds can make animal-based systems more planet-friendly, reducing methane outputs, boosting carbon capture and protecting marginal land. A key to this is using more productive and more nutritious forage plants.

Livestock keepers around the world use hundreds of species of grasses, legumes and trees to provide feed for their animals. These may be planted in fields and pastures, grown along farm boundaries or intercropped with food crops. When not grazed directly by animals, farmers harvest them to feed to penned livestock or sell in the market.

A study published in 2021 suggests that there are at least 159 million hectares under cultivated forage in the developing world, worth around USD 63 billion a year.

Crop Trust Partners Working to Conserve and Use Forage Diversity

The International Livestock Research Institute (ILRI) maintains a diverse collection of forage grasses, legumes and fodder trees, including the world’s major collection of African grasses and tropical highland forages. The genebank in Addis Ababa, Ethiopia, conserves more than 19,000 seed samples of over 1,000 species, making them available for use as part of the global system of genetic resources conservation and use.

The ILRI genebank is unusual for an international genebank, in that it often sends seed directly to farmers. The genebank staff have identified 48 "best-bet” species of legumes, grasses and trees that they have multiplied in large quantities and sell at cost through a special Herbage Seed Unit. The customers are not just Ethiopian farmers, but also NGOs, government offices, educational institutes and commercial seed producers.

This service has contributed to a significant increase in the development and release of new forage varieties in Ethiopia in recent years. Ten of ILRI’s genebank seed samples – three forage grasses, four herbaceous legumes and three browse trees and shrubs – were released by the Ethiopian authorities between 2016 and 2018, and more are in the pipeline.

Chris Jones, leader of the Feed and Forage Development Program at ILRI, said, “We conserve and characterize our genebank seed samples so that livestock producers can use them, so it is great to see more of them being taken up for this purpose.”

The collection of tropical lowland forages at the International Center for Tropical Agriculture – now part of the Alliance of Bioversity and CIAT – is driving efforts to help livestock systems adapt to -- and not contribute to -- climate change. Researchers are finding that some well managed forages can actually sequester as much carbon as native forest – or even more.

One of these is the, which originated in Africa but is widely cultivated in Latin America and Asia. As animals graze on Brachiaria, carbon is returned to the soil through deep roots and manure. CIAT has found that in areas of high rainfall, the best plants of Brachiaria can sequester even more carbon than an equal area of forest. Some species also produce a unique chemical that halts the microbial process of nitrification, suppressing the release of the potent greenhouse gas nitrous oxide, and keeping nitrogen in the soil.

Another species with climate-friendly properties is the greater bird’s foot trefoil (Lotus uliginosus). This perennial legume reduces the formation of methane, a major greenhouse gas, in the digestive tract of cattle. The protein in its leaves is easily absorbed by cows, allowing them to produce greater quantities of more nutritious milk. Like ILRI, the CIAT genebank also offers this and other forages directly to farmers, who receive more than 9% of the seed samples the genebank distributes each year.

CIAT scientists have also combed through their collection for forages resistant to drought and flooding, preparing farmers and their livestock for future weather extremes. They have found much interesting material among plants collected in the 1970s and 1980s, when the genebank in Cali, Colombia was first being filled. At that time, these were not seen as particularly important, but like any good conservation program, the genebank saved them for a rainy -- or dry -- day. Today, their resilience in unpredictable conditions is exactly what many farmers need.

The International Center for Agricultural Research in the Dry Areas (ICARDA) conserves forage diversity from the dryland areas and brings specially adapted plants to more arid regions, from traditional legumes and grasses to spineless cactus. The genebank currently holds more than 27,000 samples of forages, including grasses and legumes.

Livestock, particularly small ruminants such as goats and sheep, are central to dryland food production systems around the world. In the past, most were able to graze on open rangelands, but growing populations and overgrazing have changed this. Today, rangelands provide less than a quarter of the feed needed by small ruminants.

ICARDA has worked to introduce – or sometimes re-introduce – forage crops from its collection to make up this shortfall and take pressure off fragile dryland ecosystems. One unconventional solution is spineless variants of the prickly pear cactus (Opuntia ficus-indica), originally from central America. Researchers have tested a wide range of lines in Jordan and India, where the best adapted are now being grown as feed by smallholder livestock owners.

In Tunisia, ICARDA has been working with the national program to promote reseeding pastures with indigenous forage legumes. One of these is sulla (Hedysarum coronarium L.), a deep-rooted and drought-resistant forage species that is also highly palatable to livestock, nutritious and productive. This has helped farmers boost their livestock productivity while reducing soil erosion and enhancing carbon sequestration – a triple win for the farmers and their environment.

Wild relatives get a boost

The Crop Wild Relatives Project was developed to collect important species of crop wild relatives, ensure their long-term conservation and facilitate their use in breeding new, improved crops. This 11-year project was launched in 2011 with USD 50 million in funding from the Government of Norway. Managed by the Crop Trust with the Royal Botanic Gardens, Kew, the project was implemented in partnership with national and international genebanks and plant breeding programs around the world. The work is continuing under the “Biodiversity for Opportunities, Livelihoods and Development” (BOLD) Project, which is also funded by the Government of Norway.