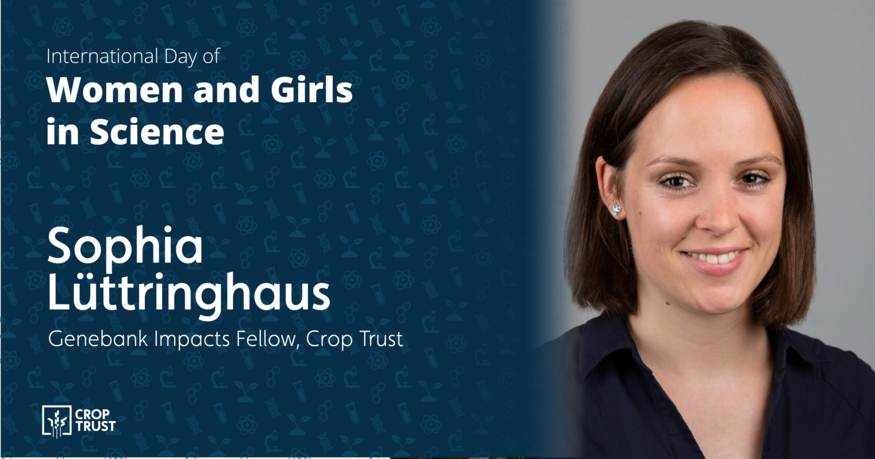 Sophia Lüttringhaus grew up in Berlin, Germany, where she nurtured a passion for nature, collecting seeds and painting them with watercolors.

As she grew older, she became interested in international cooperation, development economics and especially how to achieve zero hunger and climate justice. This led her to become an agricultural economist.

She researched the economics of crop diversity and its contribution to sustainable agriculture at the Humboldt University of Berlin and the Potsdam Institute of Climate Impact Research. And she put this research into practice as a Genebank Impacts Fellow under the CGIAR Genebank Platform, managed by the Crop Trust.

We spoke with Sophia to learn more about her career path and her advice for other women in science. The transcript of the conversation has been lightly edited for clarity.

I always loved to ask “why.” Why is something working like it is? I wanted to understand things, know about different perspectives and do deep dives in how things work. I love to learn – be it languages or math – so this made me move into science.

Did you have any role models or mentors?

Early on, it was really from books. When I was a child, I loved books about female explorers such as Maria Sibylla Merian, but of course she couldn’t be my mentor because she lived some centuries ago.

Later, my first boss at university really helped me move ahead. During the fellowship at the Crop Trust, I had great mentorship from Nelissa Jamora and Melinda Smale. I am also part of a mentoring network where I met some great, inspirational people.

So, there are many mentors. The first ones were probably my parents, so lots of thanks to them.

We need role models so that we know what we can do and what we can be, that show there are no limits and that everyone can fulfill their passions. But there are many preconditions to that.

We need good education available to everyone. And it’s not only about gender diversity, but also diversity in general. I would really like a world where we see more diversity in all kinds of positions.

Why do you think more women and girls should have careers in science?

First of all, definitely for a different perspective. Everyone does things differently and it’s great to learn from others, to grow together.

As scientists, we know that one can get easily trapped – so to say – in knowledge. You think – “OK, this is the track, and everyone has followed this beaten path,” and you don’t look right or left because you are too busy. And it probably works, but often it is good to have a different perspective.

It’s also a question of equality and equity – so women need to have a role. There is no way around this in order to have an equal society. It is also a different focus. There are many studies on this. For example, the hidden data gap regarding women.

Statistics are often only about men. Let’s take the medical field: Most treatments are tested with men and not women, which of course then makes it more difficult to treat women correctly and to the best of our scientific knowledge.

So, it’s not only important that women are present in developing results – being scientists – but also that they are on the receiving end of how to improve technology and medicine.

In the economics field, for example, it is also about the participation rate. During household surveys, we should not only interview, for example, the household head, but also the whole family, and then acknowledge different labor and tasks that everyone shares.

How can we encourage girls to choose science as a career?

One big issue regarding the quality or general diversity in science is also the mental load. It’s quite a new term, but it is really important to recognize, first of all, the unpaid care work of many women and then reduce it and redistribute it.

As a whole society, we profit from unpaid care work, whether it is caring for kids or elderly family members, or doing some social activity.

I think this is so valuable for our society and our development and so this unpaid care work is really a big issue that should be tackled.