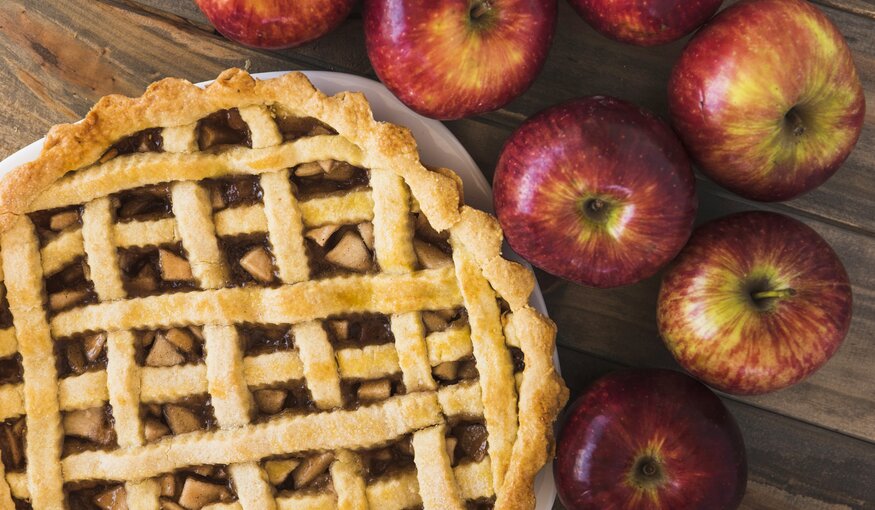 Ever heard the saying "as American as apple pie"? What about "for mom and apple pie," the proclamation made by many American soldiers shipping overseas during WWII? Over the last century, American patriotism and apple pie have become synonymous. Which is quite ironic, given that neither apples nor apple pie, are all that American.

Today is Apple Pie Day and to celebrate, we’re taking a look at the origins of this prized dessert and its star ingredient.

Originating in the Tien Shan mountains of Kazakhstan, and still found wild there, the apple has been part of the human diet for thousands of years. The hundreds of varieties known today result from a long and complicated history where multiple wild species contributed to the fruit’s lineage as it traveled from Central Asia to China and Europe along the Silk Road, and later to North America.

While apple pie hasn’t been around for quite as long as the apple, it also has a long history. It is said to have originated in England, where the first recipe can be found in a 1381 work by the famous author Geoffrey Chaucer. Originally, it contained figs, raisins and pears in addition to apples, all nestled in a sugarless pastry shell known as a coffyn.

The recipe for apple pie, along with apple tree cuttings, came to North America on the ships of European settlers in the 17th century, and spread westward with the new country. A myth grew up about that, starring Johnny Appleseed, who legend has it walked barefoot from Pennsylvania to Illinois planting apple seeds and thereby staking claim to land and profits raised by apple cultivation.

It was here in America that the apple pie we know and love today was born. As sugar became more widely available, the savory, sugarless British pies were fused with the traditional strudels of German immigrants to make the sweet and flaky combination that would win over the hearts of millions. In the early days of the American melting pot, apple pie reflected the diversity of a growing nation.

If you consider the origin of the crops that give us the ingredients that make up apple pie, there’s not much that’s particularly American. Apples originated in Central Asia, wheat in the Middle East, sugarcane in Papua New Guinea and cinnamon in Sri Lanka.

The same applies to most of the dishes we consume. The crops that constitute their main ingredients originated in certain parts of the world, moved to others, where they were assimilated by different cultures, and eventually treated as if they were native. It makes food, perhaps, the world’s greatest immigration success story.

But back to apple pie. By the mid-1800s, there were thousands of different apple varieties grown in the United States - an astonishing amount of diversity. Cary Fowler, Crop Trust Former Executive Director and Food Forever Champion, says that in America in the 1800s, farmers and gardeners were growing over 7100 named varieties of apples.  Today, most of those are extinct.

So what happened? Why so many then, and so few now? And should we even care, especially if the ones now in production are the best?

As Fowler says: "There is no best variety." An apple that is small, tough and sour may still be valuable because of unique traits useful to plant breeders. Among these myriad varieties may be apples with resistance to pests, disease or higher temperatures, for example.

While thousands of varieties have become commercially extinct, they are not all biologically extinct. "Apple detectives" track down old heirlooms tucked away in abandoned orchards or growing in back yards, and genebanks, such as those run by the United States Department of Agriculture (USDA), the N.I. Vavilov Research Institute of Plant Industry in Russia (VIR), the Chinese Academy of Agricultural Sciences (CAAS), and many others are helping to conserve them.

The Crop Trust recently supported the development of a global conservation strategy, which outlines the actions needed to comprehensively conserve the world’s apple diversity. The strategy found that apple collections are held all over the world by public institutions, universities, private companies, botanical gardens, foundations, public parks and passionate individuals. These local and independent conservation efforts stand alongside bigger national collections, and the Genesys online catalog of genebank collections lists data on more than 44,000 samples in 91 institutions.

While the strategy outlined an impressive breadth of conservation efforts globally, it also found several weaknesses. Many local collections are maintained by just one or a few committed individuals, often without stable long-term funding. This makes these collections extremely vulnerable in the long-term.

The apples safeguarded by many enthusiasts globally not only have genes for resistance to the threats facing the modern apple orchard. They might just bring back some unique flavors too. In Upperville, Virginia, The Oak Spring Garden Foundation, a Food Forever partner organization, grows 28 apple varieties interspersed with native crabapples and other trees on its Biocultural Conservation Farm.

Sir Peter Crane, Oak Spring President, wants the flavors to carry a taste of history: "We want to play a role in preserving not only the fruits but the traditions associated with them, which go right back to colonial times. Eating fresh apples in the autumn, preserving them for the rest of the year, and making cider were all part of daily life back then."

To highlight the unique flavors of the apple varieties still in production today, we’ve compiled a list below of some of our favorite apple varieties specifically for making apple pie. Ranging from sweet to tart to a fusion of the two, from well-known favorites like the Granny Smith to less conventional varieties like the Esopus Spitzenberg, we hope you enjoy learning just a bit more about the incredible diversity of one of the world’s favorite fruits. Happy baking!

Pie apples which are both sweet and tart