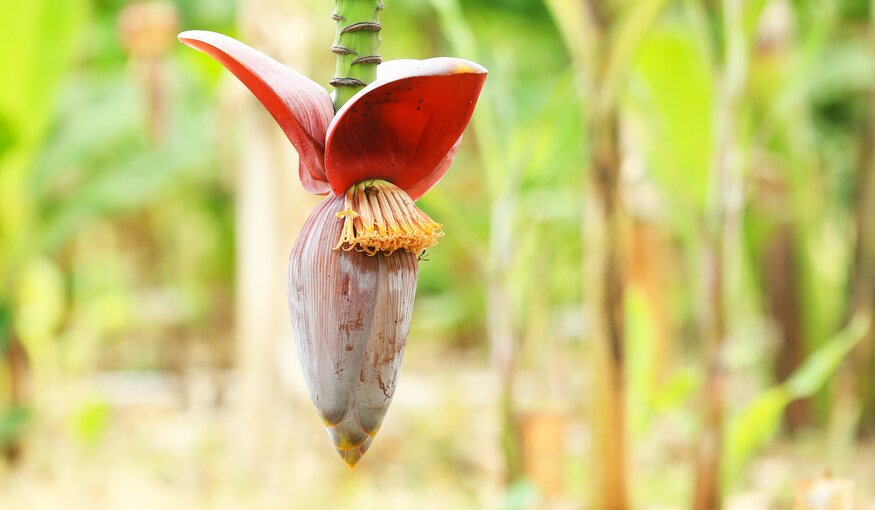 As one of the world’s most widely produced and consumed fruits and staple foods, bananas (including plantain) are of vital importance.

But pests and diseases, such as the Tropical Race 4 fungal infection, and climate change, have put bananas at risk.

In the face of such threats, the Bioversity International Musa Germplasm Transit Centre, or ITC, has been working with national partners to find, collect and conserve banana diversity. The germplasm held by the ITC is also widely distributed for use in research, as a 2019 Genebank Impacts study found.

Today, with more than 1,500 plant samples, or accessions, the ITC holds the world’s largest collection of banana germplasm at the Katholieke Universiteit Leuven in Belgium.

But gaps in the collection remain.

Julie Sardos, a genetic resources scientist at ITC, says scientists have yet to fully explore some of the countries where bananas originate for unique diversity that may be useful for research and breeding, possibly even with traits for combating Tropical Race 4. “We are trying to build networks and collaborations with those countries to work on this, but that’s a long process,” she says.

“I’m convinced that in farmers’ fields there are unexpected levels of diversity with potential for traits that will be of interest in the future,” Sardos adds.

With funding and support from the CGIAR Genebank Platform, the ITC and its partners embarked on several missions in recent years to explore for different varieties of bananas.

Vegetative Growth Has Some Surprises

Though wild bananas all have seeds, cultivated varieties derive from plants that produce fruits without seeds — rendering them sterile.

Today a good cultivar is essentially “a dead end” for sexual reproduction, Sardos explains. This makes banana cultivars different from seeded crops which can be crossed to breed new distinct varieties.

But new forms can appear through a clonal process, Sardos says.

When banana plants reach a certain age, they produce shoots, referred to as suckers, which grow in place of the mother plant after it bears fruit and dies.

Usually, these suckers are genetic clones of the mother plant but, on occasion, mutations during the clonal process give rise to new varieties and “amazing diversity,” Sardos says.

“Sometimes it’s that the fruits are bigger, or the bunches are smaller, or the plant is taller, or the color is different,” she says.

Through exploration missions, the ITC works with national partners to find and record banana diversity and collect samples for conservation in national collections with backups stored by the ITC in Belgium.

On one such mission in Papua New Guinea, where Sardos was working with staff from the country’s National Agricultural Research Institute, the team found themselves with a mystery to solve.

Sardos noticed a unique banana in a market on Buka Island, in the autonomous region of Bougainville. They were long and slender with whitish skin, she says.

The problem is “if you find the fruit in a supermarket, it’s only helpful in telling you that somewhere there is a plant bearing this fruit, but you cannot do anything to conserve that potentially unique variety without first finding and sampling the mother plant itself,” Sardos says. “We needed information.”

They searched for nearly two weeks.

Finally, the team found the plant they were looking for growing in a field next to a local school. They were allowed to take some suckers, but still couldn’t learn much about the variety or where it came from.

Eventually, they discovered it was called Talasea, named after a district on a different island in Papua New Guinea.

Talasea is just one of many varieties that are now conserved by the ITC, which has produced catalogs detailing the diversity collected during recent missions to the Cook Islands, Samoa and Papua New Guinea.

Recent studies by Bioversity International have confirmed the immense value of the banana germplasm conserved by the ITC, particularly for researchers.

In 2019, for instance, a review of accessions the ITC had distributed between 2000 and 2017 and a survey of institutes that had requested banana germplasm found that more than 5,000 accessions had been distributed over that period to 115 institutes in Africa, Asia and the Pacific.

While much of the distributed germplasm was used for research, some was also introduced into cultivation and adopted by local communities.

Another study focused on Latin America and the Caribbean found two accessions from the ITC were used by Cuba’s Instituto de Investigaciones de Viandas Tropicales (INIVIT) to develop new hybrids that were “highly requested for their fast growth, taste and production levels.”

“The ITC is located in Belgium, where there’s no banana or plantain growing naturally or in farmer’s fields, which makes it easier for them to provide germplasm to requestors around the world that can be guaranteed to be clean and free from any fungi or disease,” Ocampo-Giraldo explains.

“Given the spread of devastating banana diseases and their impact on large plantations, this is a massive plus,” she says.

Alongside the risk being infected with viruses, national collections, which are often conserved in the field, can be vulnerable to hurricanes, floods and other extreme weather events, which may only worsen with climate change.

In case of such an event, the germplasm conserved by the ITC can also be used as a backup to help rebuild national collections, Sardos says.

These are just some of the reasons why efforts to collect and conserve different varieties and make them available to users are crucial for banana farmers today and into the distant future.