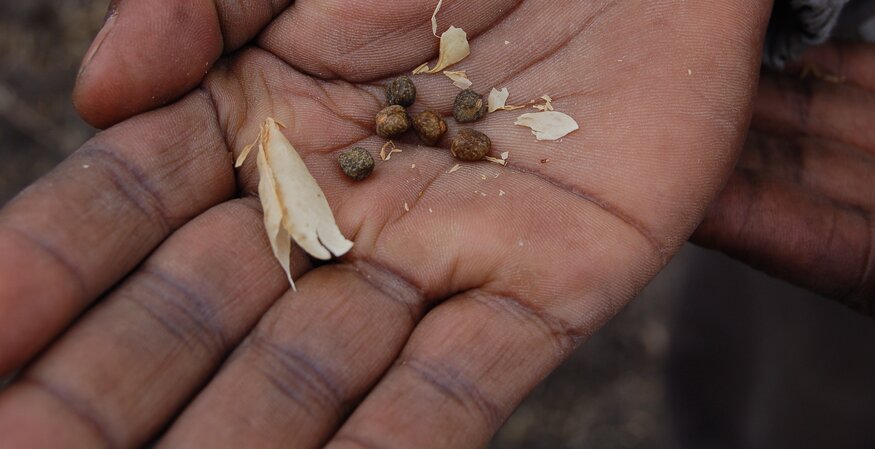 Dr. Haileyesus Getahun was traveling in the remote north of his native Ethiopia when he encountered a painful sight.

After cruising over a beautiful but arid highlands and valleys for about 6 hours on a mule back, amidst a scorching sun, I was in a native thatched hut. In that rural family I saw both the patriarch and the matriarch of the household including their two daughters and two sons.

Recognising the arrival of my group, the family attempted to offer the traditional respect by bowing but unfortunately to no avail. All but one girl were crawlers. They were recent victims of the crippling disease of lathyrism, what we call in Amharic Ye guaya Beshita. The family totally depends on neighbours and relatives for its living. The patriarch tearfully told me he was praying for his death just to ‘escape’ the agony of watching the suffering of the family. This family is just one amongst the thousands….

The family Dr. Getahun visited were surviving a vicious drought in their region by subsisting solely on grasspea, a high protein legume grown by many Ethiopian farmers. Grasspea is used as a form of on-farm insurance, feeding families when all other crops fail in even the most extreme droughts and floods. But this insurance policy comes with some fine print. The otherwise nutritious seeds contain a toxin called ODAP, which causes permanent paralysis if too much is eaten for too long. Moderate consumption of grass pea is perfectly safe, but when all other crops fail and farming families have to subsist on nothing but their insurance for a few months, the toxin can build up and take a gruesome toll. Outbreaks of lathyrism have occurred after droughts in Africa, Asia and Europe, and at least 100,000 people in developing countries are thought to suffer from the disease today.

The terrible effects of long term toxic pea, grasspea, consumption have prompted some countries to outlaw its sale, but it would be foolish to abandon the crop. It remains a failsafe protein source for poor farming households in uncertain climates, and in the right time and place it saves lives. The plant grows fast, produces healthy fodder for livestock, and even adds nitrogen to the soil. This is why, 8,000 years after it was domesticated, grasspea is still grown across four continents. In Ethiopia and South Asia it is a staple of small farmers, planted on nearly three million acres; in Spain it is used in gachas manchegas, a hearty ancient stew; and in Central Asia and Australia it feeds cattle on marginal land.

Breeders have worked for the last 50 years to produce varieties of grass pea with safe levels of ODAP. This task is fueled by the crop's widespread diversity, and particularly by certain Middle Eastern varieties found to have much smaller amounts of the toxin. The International Centre for Agricultural Research for Dry Areas (ICARDA) in Syria, as well as breeders in Ethiopia, India, Bangladesh and Australia, have all tackled the challenge over the years and produced grasspea lines with only trace levels of ODAP.

However, grass pea has proven to be one of plant breeding's toughest nuts to crack. Toxicity creeps back over the years, and surges when grasspea grows during drought – right when farmers rely on it most. Fifty years of partial successes mean that breeders will be working with grass pea for a long time to come. This is why the Crop Trust funds ICARDA's global collection of grass pea and its wild relatives. It has also organized the rescue of 1,881 aging accessions at genebanks in Azerbaijan, Bangladesh, Bulgaria, Hungary, Pakistan and Ukraine. If there is no single answer to the threat of lathyrism, then breeders will need all of this diversity to give farmers and their families the safest insurance possible.