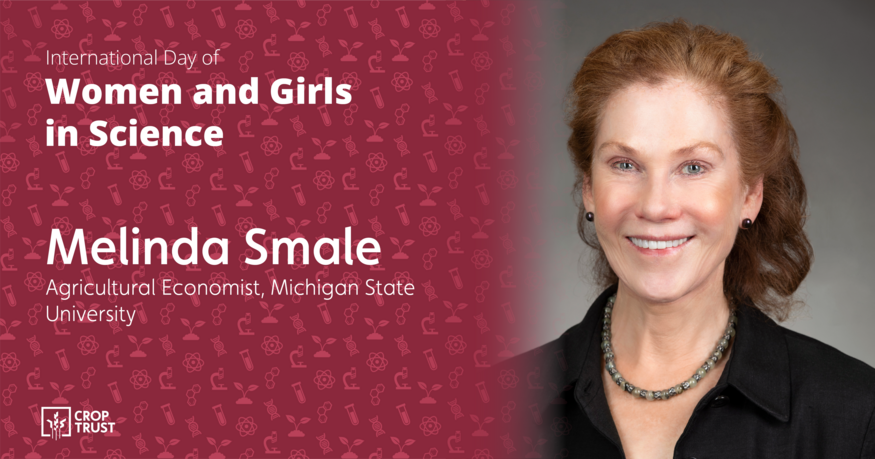 Melinda Smale was recently named a fellow by the Agricultural and Applied Economics Association for her innovative work and mentorship of women, particularly women in low- and middle-income countries, in the field of agricultural economics.

After decades of work, more than 100 peer-reviewed articles and a body of work that’s been cited more than 12,000 times, she said that receiving the award gave her a strong sense of inclusion in a profession she’s respected and been a part of since the early 1980s.

Her reaction shows how far women’s participation in science has come and how far it still has to go.

She has conducted extensive fieldwork in Asia, Africa, and Latin America and is an internationally recognized expert on farm productivity, smallholder farmer technology adoption, the impact of farmer seed choices on genetic diversity and the value of preserving genetic diversity.

She’s now a professor in the Department of Agricultural, Food, and Resource Economics at Michigan State University, and a mentor for young scientists in the Genebank Impacts Fellowship Program run by the Crop Trust as part of the CGIAR Genebank Platform.

We spoke with Melinda to learn more about her career path and her advice for other women in science. The transcript of the conversation has been edited for clarity.

I was a child during the 1960s in the United States so, as you can imagine, I was very concerned about our society, and of course, still am. I remember talking one evening with others about economics in college. If I follow that, I thought, I can depict, I can structure, or maybe even predict or change what I see around me. So, I saw it as a means of doing what I hoped to do, which was some form of what we call today “transformation.”

Why is it important to have more women and girls in science?

You need as many points of view and perspectives as possible. Science gives a rigor and a structure to be able to express yourself, test hypotheses and ask questions. But we need many different ways of asking questions. That means lots of different types of people, period. Men and women from all walks of life.

As a professor, you work with lots of young people. What do you see as obstacles preventing more people from choosing science careers?

I’ve only been a professor for the last 10 years. Before that, I worked around the world in interdisciplinary teams with people of all colors and all backgrounds. So, from my perspective now, in a US university, what stands in the way is obviously various forms of discrimination.

But when I was growing up, an obstacle was the messaging. The messaging was usually focused on men's ideas, men’s futures. Not being able to see yourself doing something is, I think, what impedes girls from going into challenging professions and careers.

Did you have any role models or mentors who helped you?

When I began my career as a postdoc in an international research organization, there were no women in my program. But there was a handful of young female scientists, maize breeders and crop scientists – a handful.

I remember them very well and they inspired me. I connected with them, and they were role models to me. They were not exactly mentors. There were no mentors until I was in my mid-career, and then actually the woman who mentored me as I became a senior research fellow was younger than I was.

To be honest, young women have meant a lot to me as a source of inspiration through my career, and I even go to them for advice.

It took me around the world to accomplish what I needed to accomplish. I had to work as a part of the team. We needed to overcome various sorts of cultural, language and gender barriers. Various sorts of things were standing in a way – boundaries that were artificially imposed on our research and how we did it.

So, finding innovative ways around research questions has also been very meaningful to me, but that has been facilitated by working with people with very different perspectives.

You've been named Fellow of the American Applied Economics Association. What does this award mean to you?

I didn’t think it would mean anything to me, but when I received the phone call about the award, I broke down. Because to be honest, for many years I didn’t feel included. I feel included now. It seems strange to hear that at the end of someone’s career, one might feel that way. But it sort of ties a knot around it. It gives me a sense of inclusion in a profession that I worked to be a part of since 1980.

How would you encourage young girls who are thinking about choosing science as their profession?

Never stop asking questions. Pursue your passion. Don’t let people impose boundaries around the way you think and the questions you ask.