By LUIGI GUARINO | Director of Science and Programs

All the genebank managers of the CGIAR centres get together every year as part of the CGIAR Research Programme (CRP) on Genebanks. It’s not really a research programme. Suffice it to say that it’s the mechanism whereby reliable, long-term funding for the day-to-day running costs of these important genebanks is assured, and managed. You know, things like making sure the fridges stay on and the staff are paid.

And these collections really are important. Together they represent about 10% of global holdings of crop diversity, if you go by total numbers of accessions, but probably closer to a quarter or a third if you try (and it’s not easy) to account for duplicates among genebanks. They are global in coverage, both as regards the diversity of the crops they hold and the service they provide. They underpin the crop improvement work of the international agricultural research centres themselves, and of public sector breeding programmes in developing countries from Afghanistan to Zimbabwe. For all this they are recognized in Article 15 of the International Treaty on Plant Genetic Resources for Food and Agriculture. Here’s the people who have the responsibility to keep all this ticking over, day in and day out. That’s Mt Meru in the background.

So every year the women and men who look after the international collections managed by the CGIAR centres (and the Secretariat of the Pacific Community) on behalf of the world under Article 15 of the ITPGRFA meet together to discuss how they’re getting on, and what their plans are for the following year. That may sound a bit old-fashioned, but there’s only so much you can do by email. Anyway, the meeting is also an opportunity to debate particular technical issues, and link up with other genebanks, on this occasion from eastern Africa. The managers of the national genebanks of Tanzania, Uganda and Kenya joined the fun this year, and so did a representative of the SADC Plant Genetic Resources Centre (the regional genebank for southern Africa) and the head of the genebank at the World Vegetable Centre (AVRDC), which although based in Taiwan has a regional office, and indeed a regional genebank, in Arusha. During the field day we visited both that and the Tanzanian national genebank. The lady in the middle of this photo is Margaret Mollel, who runs the latter. The guy on her right is Desterio Nyamongo, who’s the head of the Kenyan genebank. The other lady works at AVRDC. 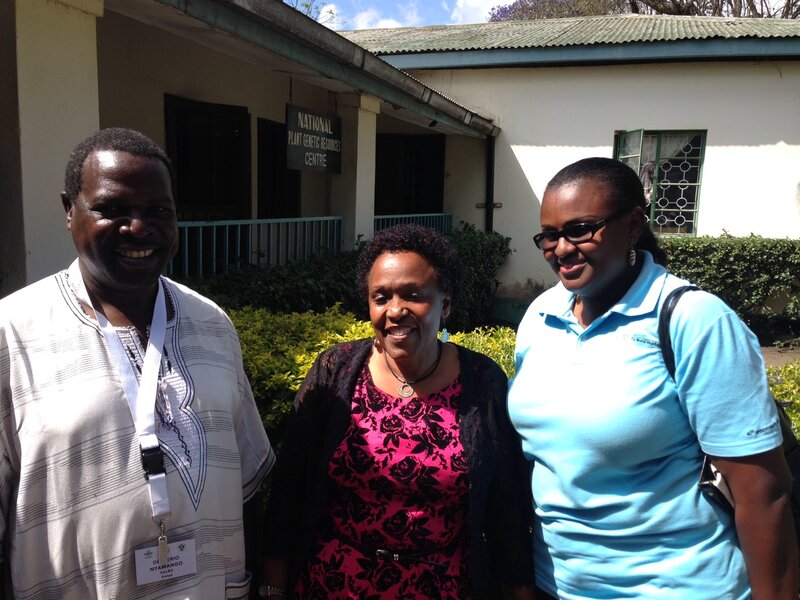 It’s not easy summarizing what happened during the course of five very full days, but you can maybe get something of an idea from this stream of tweets. There’ll be a formal report in due course, of course, which I’ll link to for all you genebank nerds out there. I’ll just tell you here the four things that really stuck in my mind.

First, this idea of sequencing the whole collection is, perhaps inevitably, really taking off. There’s Seeds of Discovery at CIMMYT for maize and wheat. And that 3000-rice-genomes thing at IRRI that we’ve already blogged about here. And cassava, chickpea and other crops are getting in on the act too now. Which makes the time especially ripe for DivSeek. If collections are going to be sequenced left, right and centre, it will be important that genebank B does it in a way that’s comparable to how genebank A did it.

Second, genebanks are embracing quality management systems. I don’t mean that everybody’s trying to get ISO certification, or the like, although some are. No, what I mean is that the international genebanks realize that they need to say clearly what they do, do what they say, and get someone to verify that, including through regular external reviews. And, crucially, that they must have a plan to continuously monitor their performance and improve it towards common agreed targets. 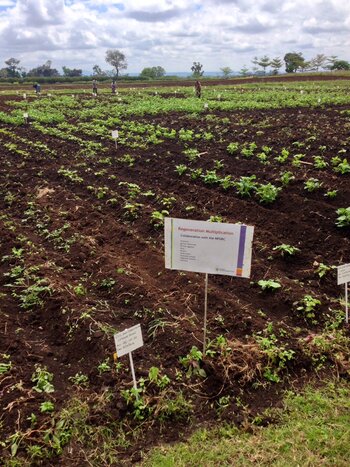 Thirdly, everybody agrees that genebanks have to work together, not just IRRI with AfricaRice, say, on conserving rice diversity in Africa, or on research on optimal rice seed storage conditions; but also those two with all national genebanks all over the world with rice collections. That 3000 rice genomes project also involved China, for example. But genebanks don’t have to share a crop to learn from one another. Everybody has a little management trick, or a bit of software, or a staff member, that could potentially really help someone else. Meetings such as these become market places for innovation, and everybody wins. A lot of great ideas came up at the meeting. By way of example, the regeneration and multiplication work illustrated here on the right is a collaboration between AVRDC and the Tanzanian genebank.

Finally, it was unbelievable to me that, despite everything, ICARDA staff in Aleppo are still somehow managing to keep the genebank going. That, perhaps, is the most remarkable of the achievements of the amazing, yet largely unsung, group of people who run the international genebanks — not just in Aleppo but also in Lima, Cali, Texcoco, Leuven, Cotonou, Ibadan, Nairobi, Addis Ababa, Hyderabad, Los Banos and Suva — and whose representatives met in the shadow of Mt Meru earlier this month. We owe them all so much, and I don’t think they hear that enough.