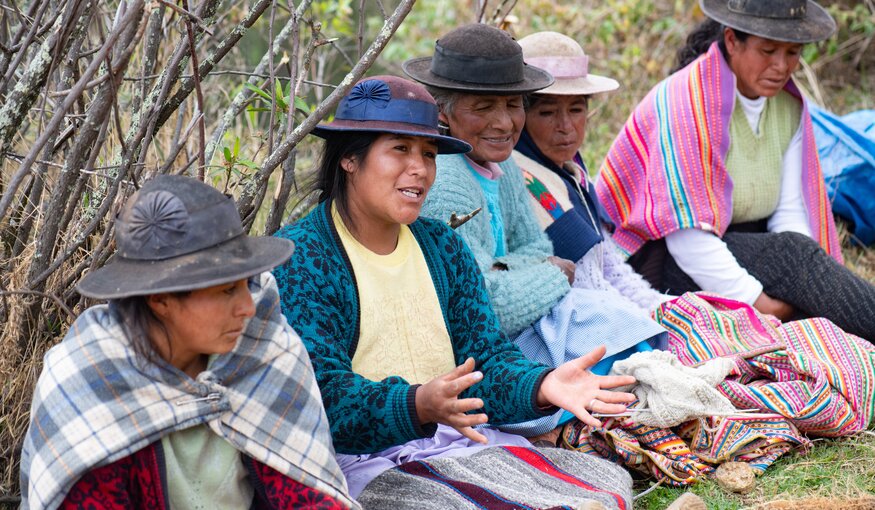 Farmers from Colpar in central Peru share their preferences for potatoes with researchers from the International Potato Center and Grupo Yanapai. Ultimately, the farmers will decide which potato varieties they plant in their fields so researchers are eager to get them involved early on in the selection process. Photo: Crop Trust/Michael Major

This World Food Day, the International Potato Center (CIP) announced a new disease-resistant potato developed with the Crop Trust’s support. Called CIP-Matilde, this special spud was developed in collaboration with farmers and potato breeders in Peru. Here’s a look at how potatoes like CIP-Matilde are developed and selected with help from farmers.

The potato is the world’s most important food crop after wheat and maize, but breeding new varieties that can withstand the pressures of climate change is no easy task. The potato’s wild relatives are more resistant to disease and climate extremes, and breeders have transferred some of their attributes to cultivated potatoes, but the resulting varieties also need to have other characteristics farmers want.

Potato breeders have learned that involving farmers in the evaluation process increases the likelihood that a new variety will be successful.

In a field in central Peru, some 3,800 meters above sea level, a group of farmers from the local community of Colpar in Huancayo Province braved an icy drizzle to share their thoughts about the potatoes growing nearby.

“What makes a good potato variety for you?” asked Raúl Ccanto, an agronomist at the non-profit association Grupo Yanapai.

The first farmer to respond was Sarita. “We look at the quantity of flowers, the diversity, the color … lots of things,” she replied.

Sarita explained that during growth and after harvest, she and her fellow  farmers also inspect the potatoes for late blight disease—known as rancha in Spanish—and determine which varieties are best suited for cooking and eating in different ways.

Globally, late blight causes billions of dollars in losses for potato farmers, who spend more than USD 1 billion every year on fungicides to control the disease, according to the International Potato Center (CIP) in Lima, Peru.

The potatoes discussed that day were special: they were candidates for release developed by breeders at CIP that were being evaluated by the farmers.

“These experiments allow us to learn about new varieties of potatoes, not only for our own use, but also for the market. That’s really great for us,” Sarita said.

The farmers were voicing their preferences and observations as part of the Crop Trust’s Crop Wild Relatives (CWR) Project. The farmers’ comments and observations guide breeders in selecting the potatoes that are not only most resistant to diseases, but are also high-yielding, marketable and suitable for cooking at home.

“Crop wild relatives are quite different from cultivated species, so an arduous  process is required for crop improvement, which is called pre-breeding,” said Benjamin Kilian, who coordinates CWR pre-breeding projects at the Crop Trust. “Because most offspring of the initial crosses between wild and cultivated potatoes have poor taste or are undesirable in some other way, they require a long process of further crossing and selection to weed those defects out.”

The farmers of Colpar have struggled to manage late blight for years, and the climate crisis is creating new challenges. Warmer temperatures at high elevations are leading to a higher incidence of this and other  diseases in places where they were not so prevalent in the past.

The project was conceived in 2000, when CIP started testing wild potatoes for their resistance to late blight. After finding some with high levels of resistance, the researchers then introduced the wild genes into high-yielding cultivated varieties.

The next step was to test them in farmers’ fields and listen to their feedback.

Farmers have their say

To conduct the evaluations, CIP worked with Grupo Yanapai, which serves as a bridge between farming communities and breeders, gathering feedback through participatory varietal selection, a research method that engages the community in the scientific process.

“Understanding the agricultural community’s role, getting the commitment of each member and taking gender into account are all crucial for the success of participatory varietal selection,” said Ccanto, who leads Grupo Yanapai’s agronomic research.

By gathering feedback from farmers, researchers can ensure that the varieties that are shortlisted for release are suited to local conditions. Special consideration is given to the needs of subsistence farmers, who require potatoes that store for long periods, taste good and grow well under local management practices.

The men and women of a farming community often differ in their views of what makes the perfect potato.

Opinions differ at the harvest stage as well.

“Generally, men like bigger potatoes, which will fare better in the market,” Ccanto said. “While women prefer medium-sized potatoes, which are better suited for seed to generate next season’s crop. Sometimes it’s difficult to make everyone happy.”

After analyzing the data coming from the farmers, combined with their own field observations, the breeders narrowed down the initial group of 17 offspring to just two.

“We are excited because these two clones have quite a bit of the wild in them,” said Thiago Mendes from CIP, who leads this potato pre-breeding project. “One of their parents is a wild potato known as Solanum cajamarquense, which we discovered had late blight resistance. This is the first time that potatoes derived from wild relatives have addressed traits of interest to farmers.”

Both CWR-derived clones met the farmers’ demands, while outperforming the “Yungay” commercial variety and local cultivars in terms of yield and late blight resistance. Farmers found one of the selected clones to be as good as their local cultivars in taste and texture.

The breeders and farmers will now analyze their data and propose one of the clones for national release.