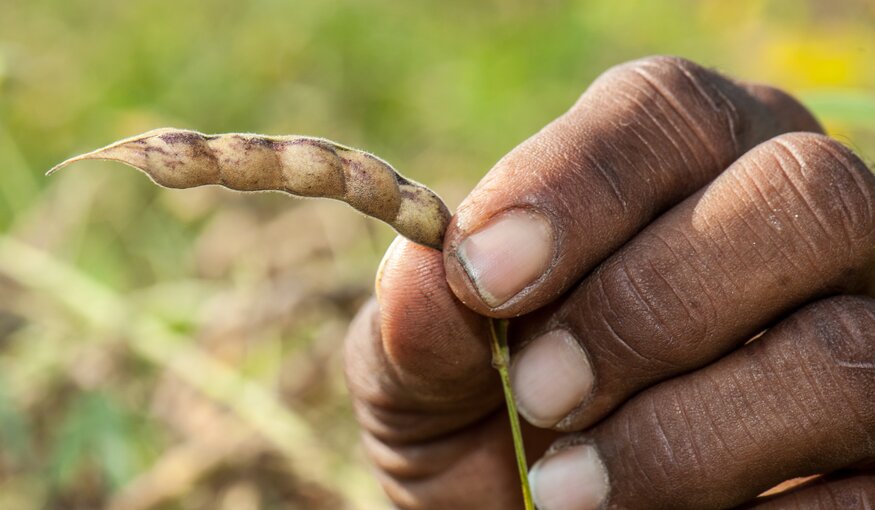 Pigeonpea is a nutritious legume that can produce harvests with just 65 cm of rain a year. (Photo: Michael Major/Crop Trust)

Drought is a terrifying prospect for all farmers, and a matter of life and death for many. A nutritious legume that can produce harvests with just 65 cm of rain a year, pigeonpea protects lives from the ground up.

The Horn of Africa is again suffering one of its worst droughts in recent history. More than 13 million people in Ethiopia, Kenya and Somalia are suffering severe food insecurity as a result of the failure of the rains.

Crops have failed and millions of livestock – which pastoralist families rely on for food and livelihood – are emaciated or dead. As a consequence, some 6 million children are expected to be acutely malnourished in these three countries in 2022. This follows on from the droughts of 2011 and 2012, which claimed an estimated quarter of a million lives in Somalia, half of these among children under the age of six.

Drought is no stranger in the Horn of Africa, and climate trends indicate that rain failures like this will become even more common. For farmers, however, a drought doesn’t have to become a disaster. In the aftermath of the 2011–12 Horn of Africa crisis, humanitarian agencies focused on distributing seeds of more drought-tolerant crops like pigeonpea to help the victims recover and plan for future uncertainty.

In the semi-arid tropics, the tall, deep-rooted pigeonpea bush serves as insurance against drought while nurturing the soil for other crops.

Pigeonpea is the key to sustainable rain-fed agriculture for many farmers in South Asia, Central America and Africa. It is typically intercropped with cereal crops, and as a nitrogen-fixing legume it supplies these with natural fertilizer, boosting their yields. Its long, tree-like taproot reaches up to 2 meters deep, breaking up the soil and improving its ability to hold rainwater.

In India, pigeonpea takes more than a supporting role. Indian farmers produce the majority of the world’s crop, and most of this is dried and split to be cooked as toor dal, a widely eaten source of protein. In and around the Caribbean, the green peas, called gandules, are cooked fresh or canned for sale. In parts of East and West Africa, meanwhile, pigeonpea is a reliable source of food and livestock feed for smallholders.

Pigeonpea is especially important to nutrition in poor households, packing lots of protein along with vital amino acids and vitamins. As the only legume crop that grows as a woody shrub, reaching up to 4 meters in height, it also provides firewood, building material and green fodder for animals.

Pigeonpea diversity includes faster-growing types that produce a harvest in as little as three or four months, beating drought before it arrives.

Traditional pigeonpea landraces often take 5–11 months to mature. Since the 1980s, breeders have repeatedly broken the speed barrier with short-duration and extra-short-duration varieties. These improve on an already drought-tolerant crop by allowing farmers to plant multiple times a year and take advantage of rain when it comes. When pigeonpea is rotated with other crops, as is done with wheat in India, this also allows the second crop to be planted earlier, making the cereals, too, less prone to drought risk.

On the other hand, not all farmers want the same traits – and the slow maturity of traditional pigeonpeas often plays a role in farming systems. In northern Uganda, for instance, these are planted with finger millet, and their slow growth allows the millet to produce its own grain before the bushy pigeonpea plants begin to compete for water, light and nutrients. As with all crops, the different needs of different farmers mean that the full range of pigeonpea diversity can’t be replaced by a few ideal modern varieties.

With recognition of its role in food security, pigeonpea has gone from an “orphan crop” to a high priority research subject with a fully mapped genome. The Crop Trust supports the collections that make this research possible.

The international collection of pigeonpea is held by the International Crop Research Institute of the Semi Arid Tropics (ICRISAT), conserving over 15,000 accessions in India and Kenya. Along with this collection, the Crop Trust has also supported the national genebanks in Kenya and the Philippines in regenerating and characterizing hundreds of their own samples.

Just a few years ago pigeonpea was considered an orphan crop, losing out to better-researched commercial legumes. With growing food security concerns, this has changed. In 2011, pigeonpea became the first non-industrial crop to have its genome fully mapped. Of the more than 48,000 genes identified in this research, hundreds of genes unique to the species are thought to contribute to its drought tolerance.

More answers may lie in the 16 tough wild species related to pigeonpea. ICRISAT scientists have already used traits from the crop’s nearest relative, which still grows in central India, to produce hybrids that boost yields by 48%. With its partners in the Crop Wild Relatives (CWR) Project, the Crop Trust has identified areas where more of this wild diversity might be collected – such as in northern Australia, where wild species have grown in isolation since the end of the Ice Age.

The recently concluded 10-year CWR Project, funded by the Government of Norway, supported collecting missions in Nepal, Pakistan and Vietnam, adding rare seed samples of four wild relatives of the pigeonpea to the three national genebank collections and at ICRISAT and the Millennium Seed Bank at Kew, UK.

Pre-breeding and evaluation projects supported by the project have made novel traits freely available to breeding programs around the world.

This expanded diversity will hopefully keep pigeonpea standing tall through droughts yet to come.