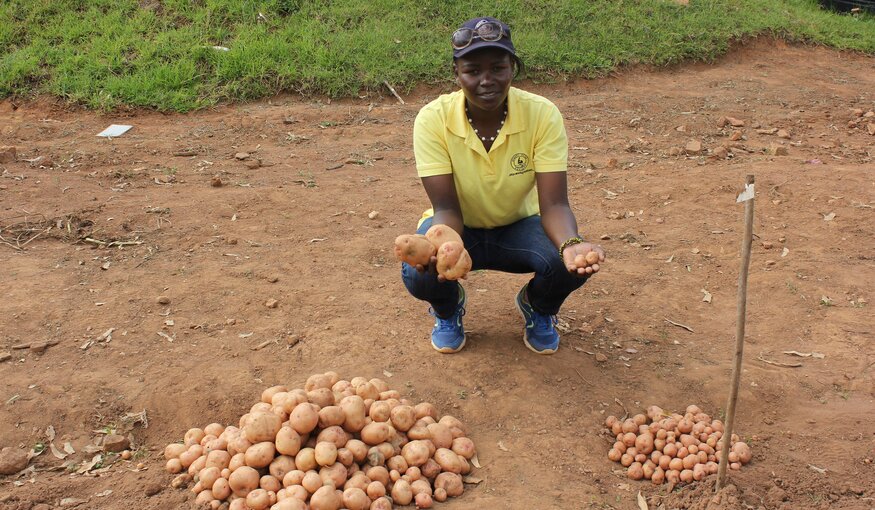 The release of Victoria has resulted in gross economic benefits of USD 42 million per year in Uganda over a 25-year period. Photo: CIP

The genebank of the International Potato Centre (CIP) holds more than 6000 accessions of potatoes and distributes samples to users all over the world. But CIP often doesn’t hear back from those recipients of diversity.

“It’s generally known that some potato samples from CIP have played an important role in the release of improved varieties grown by smallholder farmers in lower-income countries,” said Vivian Bernal-Galeano, “but we need to document this process much better if we are to really make the case for the importance of genebanks.”

Vivian is the lead author of a paper published in Food Security that did just that, estimating that the economic benefits of one improved potato variety in one country in a single year were 10 times greater than the annual running costs of the CIP genebank.

The potato variety in question, which is called Victoria, is mainly derived from CIP material. Its release has resulted in gross economic benefits of USD 42 million per year in Uganda over a 25-year period according to the study, which was conducted as part of the Genebank Impacts Fellowship Program supported by the CGIAR Genebank Platform.

Vivian and her co-authors used biological, agricultural, and market data to measure the economic contribution of the CIP genebank to the impact of the improved potato variety in Uganda.

“We followed a three-step process to estimate the economic value of a genebank sample that a plant breeder used to develop an improved variety” said co-author Melinda Smale, a professor of International Development at Michigan State University. “The first step is to figure out the genetic contribution of the sample to the finished variety. We call this ‘apportioning’. Then we have to calculate how much of a farmer’s gain in productivity can be  ‘attributed’ to the improved variety, rather than something else. And finally we have to give a dollar ‘value’ to this productivity gain. The product of these three represents value of the original sample from the genebank.”

The researchers were able to source detailed data for analysis, including production and market data for 25 years between 1991 and 2016. Victoria was released in Uganda in 1991 after being developed by CIP breeders. It has in fact been distributed, released, and cultivated under different names in several other African countries, including Kenya, Congo, Rwanda, Madagascar, Burundi, and Malawi.

First, apportioning. “We consulted the CIP breeders’ pedigree books and were able to determine that Victoria is the product of five generations of crossing,” said Vivian. “In Victoria’s ancestry we found numerous CIP genebank accessions, including one wild relative, one landrace, 10 externally bred accessions, and eight CIP-bred accessions.”

Next, attribution. Ugandan farmers like planting Victoria because of its high yield, early maturity, and attractive red skin and cream-coloured flesh. Market demand is the most important criterion for variety selection in Uganda. “Although Victoria was initially developed as a variety with resistance against late blight, it has lost part of its resistance in Uganda as the pathogen has evolved,” said Vivian. “Nevertheless, Victoria still has useful resistance, which allows farmers to control the disease using fungicides to maintain yield levels.”

On average, Victoria’s yield is 7.55% higher than that attained by seven other commonly grown potato varieties in Uganda.

The researchers were able to estimate the gross economic impact of Victoria in Uganda at USD 1.04 billion for the 25-year period from 1991 to 2016, which is about USD 42 million per year. That means that USD 30 million a year in economic benefits, or 72% of USD 42 million, are due to material from the CIP genebank.

For comparison, the total cost of running the CIP genebank to conserve 16,718 accessions of potato, sweetpotato, and assorted Andean root and tuber crops is estimated at USD 4 million per year. That’s less than a tenth of the gross economic benefits derived from a single improved  variety in one country.

“Our study of Victoria illustrates how we can trace the germplasm used to develop new potato varieties back to the genebank and thus calculate its economic benefit to a country like Uganda,” Vivian said. “Genebanks are incredible value for money.”