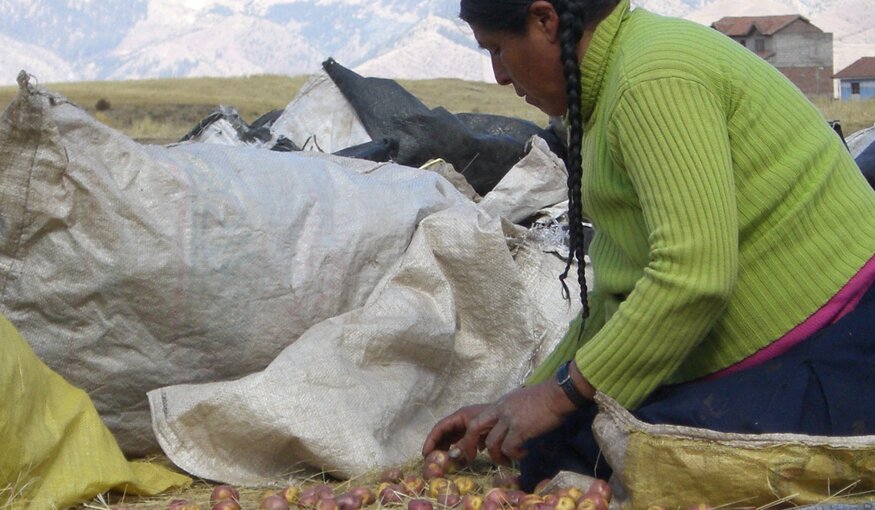 The fungus-like organism known as late blight is probably the worst disease in agriculture, affecting potatoes as well as tomatoes and other related plants. Late blight mutates and migrates like a botanical influenza, constantly overcoming plant resistance. More than 160 years after the disease wiped out potato crops across Europe and triggered the Great Irish Famine, it continues to threaten farmer livelihoods around the world.

Late blight causes €7.7 billion worth of potato losses every year in the developing world, where the majority of potato farmers live. But it also remains a threat in Germany, where the average person eats 60 kilos of potatoes every year, and more than twice that amount are grown. German farmers spend millions on chemical fungicides to make this production possible.

Ireland's famine in the 1840s was so disastrous because the island relied on a single potato variety with no defenses against late blight. Conversely, potato diversity is the only sustainable weapon against the disease.

Potato breeders rely on the full genetic diversity of potato and its wild relatives for new disease resistance. Thousands of samples of this diversity are conserved at the International Potato Center, with long term funding from the Crop Trust and help from Peruvian communities.

There are over 4,000 edible varieties of potato, the vast majority of which were created by farmers in the Andes of South America. However, the world's largest potato genebank, at the International Potato Center (CIP) in Peru, contains around 7,000 samples. This is because the collection also holds thousands of samples of related wild species. Many of these don't even produce tubers, but they do hold enormous genetic variety and potential.

The first cross with a wild relative to produce a blight-resistant potato was made in the early 1900s. However, the disease trumped this resistance over the next 50 years. In 1971, the English breeder Norman Simmonds declared:

“It looks as though potato breeding has generally been rather unsuccessful... The reason most probably lies in the narrowness of the genetic base of our north temperate breeding stocks.”

That same year, CIP began collecting wild and cultivated diversity in the Andes. Recent advances in breeding techniques have opened the door to even more of the wild gene pool. This is critical because breeders must continue to discover new sources of resistance as late blight and other diseases adapt.

More diversity is stewarded by Andean farmers, who still harvest potatoes in every shape, color and size. In Peru's 10,000 hectare Potato Park, established by six indigenous communities, farmers plant and harvest living diversity in communal genebanks. CIP has also partnered with these farmers since 2002, returning more than 400 disease-free cultivars to the fields.

Climate change is raising the stakes – for Andean farmers, for wild species, and for the world's potato crop as a whole.

Increasing temperatures have pushed potato farmers up the mountains in Peru year by year as diseases and pests creep up the slopes. Satellite mapping reveals that farmers have moved their fields an average of 150 meters up the Andes in the last 30 years. Unfortunately, there's only so much farther to climb.

Wild relatives, too, are on the retreat. The UN Food and Agriculture Organization forecasts that climate change may shrink the area where these wild species can grow by 70 percent. Under its Crop Wild Relatives project, the Crop Trust has mapped regions across nine countries where there are gaps in our collections of potato wild relatives. Scientists can't depend on this source of new genes being around forever; it needs to be conserved and studied now.

Most worryingly, climate change also seems to be powering the spread of late blight as warmer temperatures bring the disease to some new regions and raise its impacts in others. Potato growers in South America, Africa, Central Asia, and even Northern Europe are already seeing resurgent blight risk.

Some of the internationally collected diversity of potato and its wild relatives is already safeguarded for the future in the Svalbard Global Seed Vault. Now the farmers of Peru's Potato Park are sending 1,500 of their own varieties to the Vault, protecting the genetic basis of their livelihoods forever.

Recognizing the threats from climate change and disease in the potato's homeland, the community conservationists of the Potato Park decided in 2011 to send more than 1,500 seed samples of their own varieties to be stored in the Svalbard Global Seed Vault. Here above the Arctic Circle, in a fail-safe underground facility managed by the Crop Trust, their agricultural heritage will be conserved alongside more than 780,000 other back-up samples of the world's major food crops.

This three-year task began with a learning process for the farmers. Potato is usually reproduced through cuttings, but the unmanned Vault can only store seeds. Thus, the farmers have learned to pollinate their potatoes and collect seeds, packaging these in foil envelopes for storage.

Three sets of seed are being produced. One will be used by the farmers themselves in developing new varieties to face climate change. The second will be stored at the CIP genebank, and the third will be shipped to Svalbard. These latter sets will be sealed and will remain the property of the Potato Park's farmers in perpetuity.