While we edit down the hundreds of images from the trip, and review the video-interviews he carried out in the field, Toby has agreed to talk to us about his experience. As his Getty Images Reportage colleague Juan Arredondo did previously in Latin America, Toby set out to capture in southern Africa those moments that prove that crop diversity in action is not just essential – it’s amazing.

Luis Salazar (LS): Madagascar is a secondary center of rice diversity and an island whose rice and culture are inseparable. About 85% of farmers in the country grow rice, and it ranks fifth in the world for per capita rice consumption. Out of the many images you shot while crisscrossing the country, what one photograph captures how this crop is part of daily lives of the Malagasi?

Toby Smith (TS): Rice, albeit in different form, is the main component of the three daily meals. Much of Malagasy landscape has been modified and daily life is dominated by rice cultivation and the activities surrounding it. This spreads from the sweeping terraces South of Antananarivo to the flatter plains to the North-East in the ‘rice-granary’ of Andranosaka. 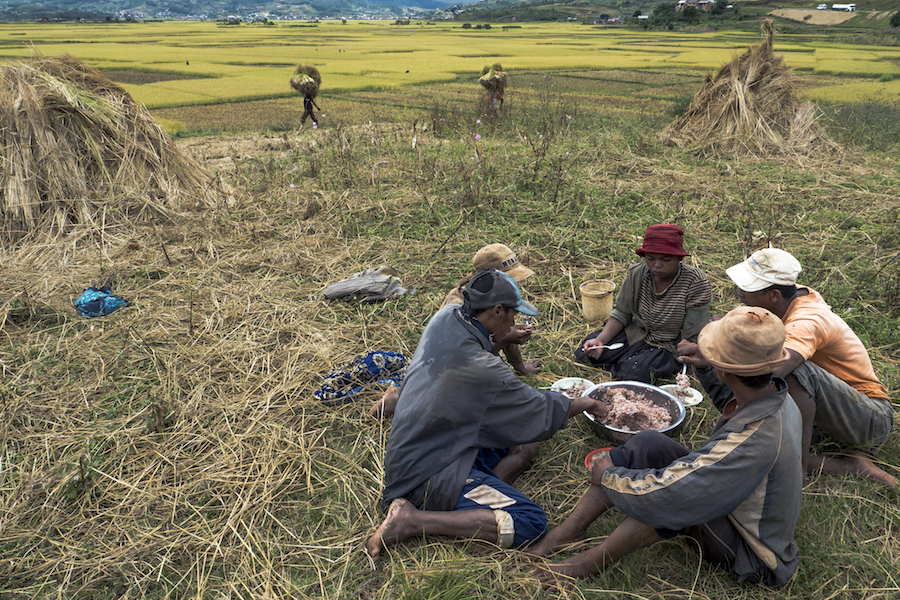 This picture shows an informal group of labourers enjoying a communal breakfast of red-rice as they take a break from bringing in the bushels of rice from the fields.

LS: Cassava was introduced to Africa from South America in the sixteenth century, and today it is a lifeline for millions of small farmers. What one image from your recent exploration of cassava in Zambia encapsulates its African story?

TS: Cassava is an important food staple for a large percentage of Zambians and especially those living close to the poverty line. I was fascinated as to how simple, resilient and relatively easy cassava is to propagate, cultivate, harvest and prepare. Cassava survives drought and can be safely stored by simply leaving it untouched underground. 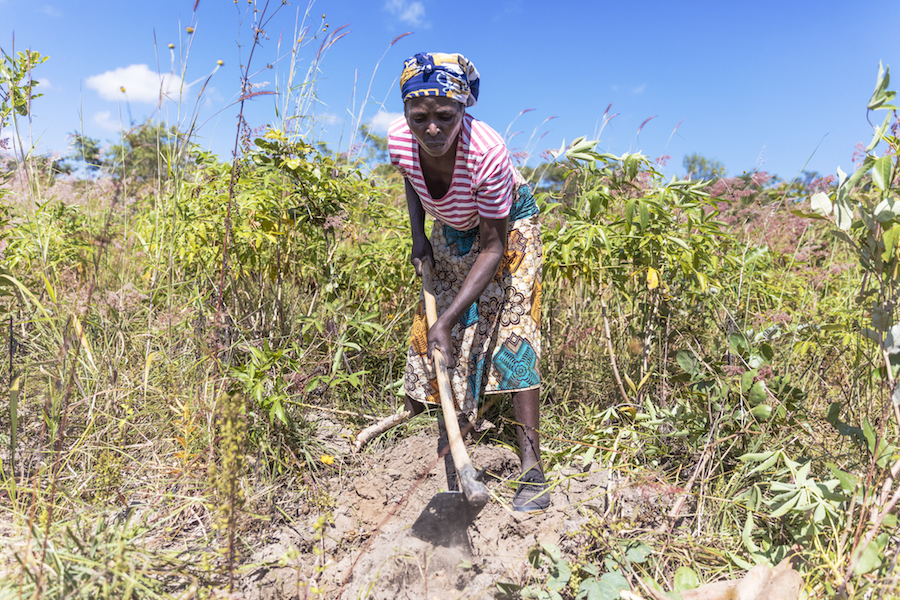 The image shows a woman using a simple back-hoe to harvest mature cassava tubers from the rough dry ground surrounding Mansa. The same tool is used to prepare the ground before planting and weeding.

LS: Zambia has perhaps the world’s highest percentage of maize consumption in the national diet (58% of total calories), exceeding even Mexico and Guatemala where the crop originated. But some years Zambia is a maize basket for the wider region, and other years it struggles to feed itself. Can you select one image that sums up the absolutely critical role of maize in this country? 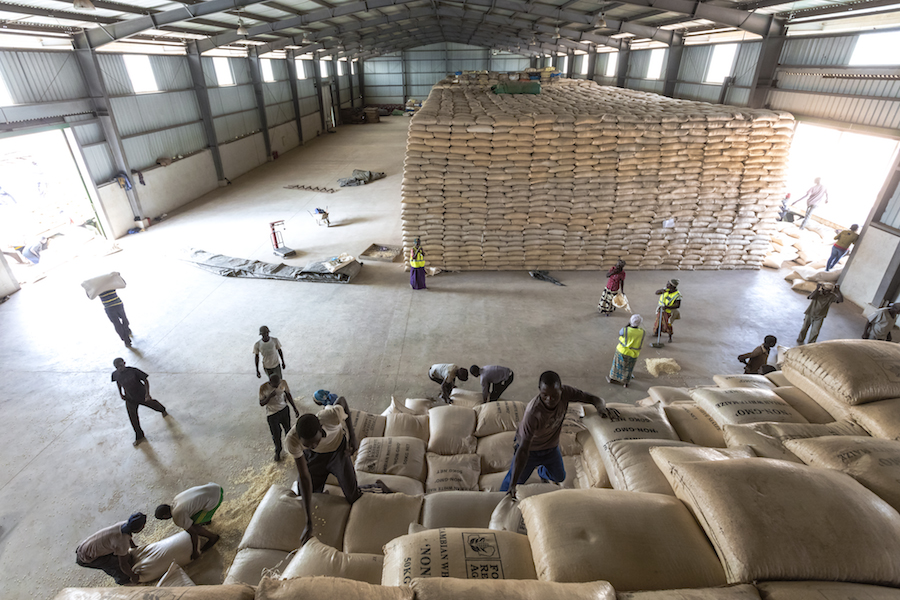 TS: I found this maize silo absolutely enthralling and pivotal to the global food security story. Each sack contains over 50kg of white maize without any identity or marked-link to the surrounding agricultural landscape. Giant, industrial scale rotor-irrigated farms and small subsistence family farmsteads feed maize into the same food system. In this way the silo both becomes a nucleus or node of the surrounding landscape whilst also being a reservoir or indicator of how successful the harvest is. It also felt like an extremely vulnerable system, with such reliance on a single commodity, any damage, climatic event or pest could create havoc and instability. This was reflected in the sensitivity of the access to the location, which came only after several meetings and phone-calls.

LS: We were surprised to hear that you were taking a drone with you on this assignment, and the results were fascinating. In photography, drones allow for new ways of approaching the telling of stories. For #CropsInColor, what one image captured with a drone did you find to be most revealing?

TS: It was fascinating to look at Madagascar through the new perspective of crop diversity and also food security, which in-turn revealed connections to other ecological and landscape narratives. The natural history of Madagascar is infamous for the crippling level of deforestation that has in many places left the soft, red, iron-rich soil extremely exposed to the seasonal rains. 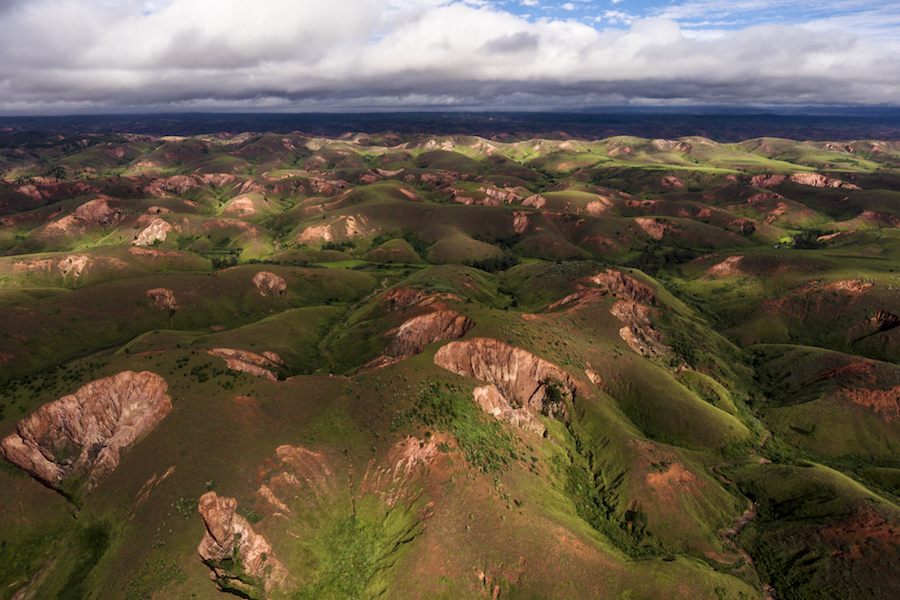 Individual areas of erosion seem insignificant but by using a drone you quickly appreciate the number of crevasses, called ‘Lavaka’, that pock kilometre after kilometre. Each of these scars, as it grows, pours sediment into the water-courses which in-turn flows into the rice paddies and irrigation systems. The sand particles clog roots and raise the level of the ground in the paddies massively reducing the rice-harvest with devastating effects.

For providing guidance and support in the region, the Crop Trust thanks AfricaRice, IITA (International Institute of Tropical Agriculture), SADC (the Southern African Development Community), ZARI (the Zambian Agricultural Research Institute), and FOFIFA (Madagascar’s National Centre for Applied Research in Rural Development). Their technical experts provided the support we needed on the ground, allowing Toby to carry out a full schedule of activities in a limited amount of time.

The #CropsInColor campaign, in collaboration with Getty Images Reportage, highlights the importance of crop diversity – for food security and adaptation to climate change.

The #CropsInColor campaign is partially funded by Dupont Pioneer. The Crop Trust is grateful for the support, which allows us to highlight – and celebrate – the crucial role crop diversity plays in everyone’s lives.

With the support of individuals, private sector, foundations and the governments of the world, we can save crop diversity forever. All donations make a difference.

All photos by Getty Images Reportage photographer Toby Smith. | This campaign is made possible by the generous support of DuPont.