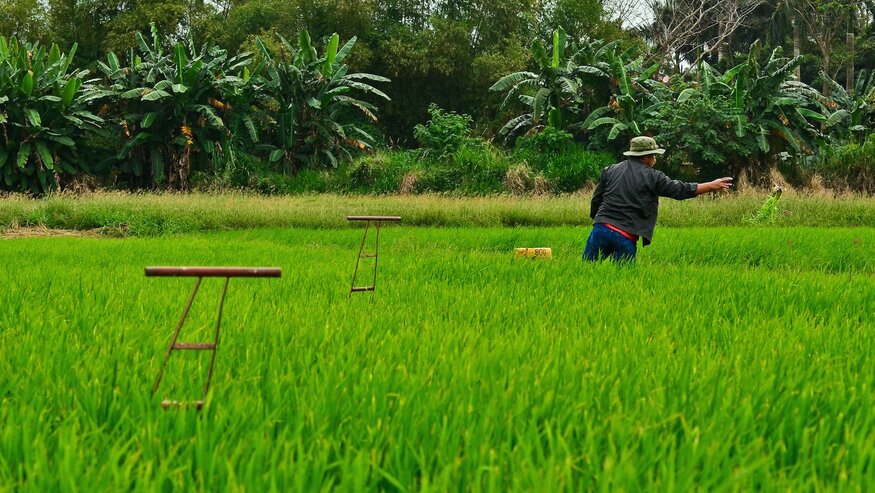 For half the world, rice makes up 80% of every meal. Thus, it's a concern for all of us that rice is so vulnerable to the escalating impacts of natural disasters.

The 2004 Indian Ocean tsunami swamped more than 46,000 hectares of cropland with saltwater in India, Indonesia, Sri Lanka and Thailand – much of it planted with rice. Japan’s tsunami of March 2011 carried a wall of seawater up to 5 kilometers inland, inundating about 20,000 hectares of rice paddy.

These historic disasters have drawn attention to the effects of salt inundation on rice grown in vulnerable areas. Storm surges destroy crops in coastal parts of India every few years. In Bangladesh’s delta, about a million hectares of potential paddy land is too salty to plant – a situation worsened by recurring cyclones. While flooded land may be cleansed of salt after a year or two of good rainfall, the short-term effects are a serious blow to the recovery of disaster-struck households.

Sea levels and storm intensity are both rising with climate change, making saltwater a greater threat than ever to farmers cultivating vulnerable, low-lying coastal fields. Rice is one of the most salt-sensitive food crops, and salinity – whether caused by seawater, poor irrigation practices or natural mineral deposits – is a major limiting factor on more than 15 million hectares of rice land worldwide.

Plant breeders working on salt-ready rice have found a tool in Saltol, a gene for salinity tolerance that can make modern rice varieties more resilient.

In the last few decades, rice breeders have introduced salt tolerance from traditional rice lines into modern varieties that deliver the yields farmers have come to expect under intensive rice farming. However, an affinity for salt is a complicated trait: multiple genes act together to help the plant keep salt out of its sensitive leaves.

A collaboration led by the International Rice Research Institute (IRRI) in the Philippines led to the discovery of one gene that confers higher salt tolerance on its own. This gene, named Saltol, was identified in a traditional rice of coastal South India. The researchers mapped the gene's location by crossing this with a salt-sensitive variety and comparing the performance and DNA of hundreds of offspring.

So far, IRRI and its partners have developed more than 100 elite lines of rice with high salt tolerance. These provide the yields, grain quality and disease resistance that are expected of an improved rice variety, but perform better than most in salty soils. With Saltol, IRRI has found that these lines can raise yields on such land from less than 1.5 tons per hectare to more than 3.5.

When breeders introduce salt tolerance and other traits into increasingly stressed modern rice, they are drawing on the global diversity of a crop with over 100,000 distinct types. The Crop Trust funds the conservation of this diversity in perpetuity.

Pokkali, the rice that provided the Saltol gene, has been grown by farmers for generations along river mouths in Kerala, South India. In a unique system, farmers grow Pokkali rice for half of the year when salinity is at its lowest. The rest of the year, seawater infiltrates the paddy and brings a shift to prawn farming. The prawns feed on the leftovers of the rice harvest, and fertilize the field for next season.

Another traditional salt-tolerant rice that has been used in breeding is Nona Bokra, from West Bengal on the other side of India. In Japan this was crossed with Koshihikari, a modern variety popular with consumers. The new, more salt-tolerant Koshihikari produces the same quality of grain but can be grown on more salty land – including land flooded by the tsunami.

Many other traditional types of rice are grown in saline regions. IRRI's screening of its own genebank of more than 117,000 samples from 100 countries found that around 17% showed useful levels of salt tolerance. The Crop Trust provides IRRI with long term funding to conserve this resource forever.

To a great extent, this effort was born out of the crisis of the Indian Ocean tsunami. Following the disaster, IRRI offered help in restoring agriculture and livelihoods in devastated regions. The institute provided salt tolerant planting material to Malaysia, Sri Lanka and other affected countries. This brought fresh attention to the importance of salt tolerant farming for coastal resilience.

Since then, plant breeders have incorporated the Saltol gene into popular improved varieties, including several widely adopted in Bangladesh and West Africa. National research partners have released 19 new salt-tolerant varieties in South and Southeast Asia since 2007.

Recent events have shown that resilient varieties will continue to play a role in disaster risk reduction. After Cyclone Mahasen hit Bangladesh in 2013, IRRI provided flood-tolerant seed to secure future harvests for 10,000 farmers. With storms becoming more intense and destructive, resilient crops will play a big role in preparing for hazards to come – and the Crop Trust will continue working to secure the genetic basis of this resilience.